BTB-Virginia Kelly In the Arms of A Stranger Author Spotlight & Giveaway!! 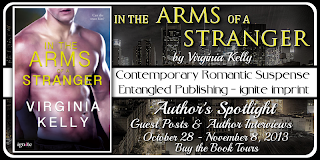 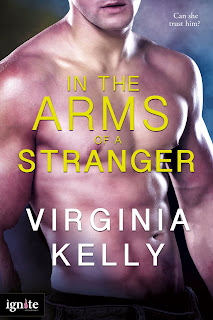 
Blurb:
A dangerous man on the run…

Wounded and accused of treason, CIA operative JP Blackmon is on the run from his own agency and desperate to clear his name. When he finds out his old partner is dead, he’ll do anything to get to the truth…including using his partner’s widow.

Abby Price wanted nothing more than a family and a safe home. But her late husband kept big secrets from her—secrets that got him killed and has government agents watching her every move. And she’s started fearing for her life. The only man who can help her is a mysterious stranger who suddenly appears out of nowhere. But can she trust him?

Together they discover a passion worth dying for.

As danger stalks them at every turn, unexpected passion flares between JP and Abby. But the last thing either wants or needs is more complications. Romance? No. Way. That would involve trust—something neither is willing to do. But in the end, sharing their deadly secrets is their only hope for survival…their only hope to hold onto the love they’ve just begun to share…


Excerpt:
“Is JP your real name?”
He smiled, and she realized she hadn’t seen one of his real smiles before. This one lit up his face, made his eyes laugh. There was devilment in the smile. “I don’t know you well enough to tell you that yet.”
Yet?
The look of him, the timbre of his voice, as if he really would know her well enough to—
Her breath caught. She couldn’t look away. That well?
She wanted to frown, to be outraged. But his eyes… Good heavens, his eyes. Everything about him, from his short dark hair, to his smile, to his broad shoulders, he was all captivating male.
Instead, she laughed. It was a totally unexpected reaction. She’d never reacted to anyone the way she did to JP. If that was his name…
And what came out of her mouth next was a total surprise. “When do you think you will?”

Setting of In the Arms of a Stranger: the South
Ancient live oaks heavy with Spanish moss, the scent of honeysuckle drifting on a warm breeze. Summer evenings spent sipping mint juleps under a ceiling fan spinning lazily overhead. Fried green tomatoes, corn bread, and seafood gumbo.
All of these evoke the American South to me. I’m an import (from Peru). I moved to rural North Alabama when I was eleven. There are no live oaks draped in Spanish moss in North Alabama, no mint juleps (I was eleven, after all). My first sight of grits made me cringe at what someone had done to white rice. My first real taste of good Southern cooking came from my best friend’s mother. My favorites? Fried yellow squash and corn bread. Now I thoroughly enjoy my husband’s friend okra. Yum.
In the Arms of a Stranger begins in rural South Alabama where Abby Price, the heroine, lives. She’s a school teacher who hasn’t strayed far from home. When sexy, intense JP Blackmon crashes into her life, he turns her world upside down. Suddenly, Abby’s chasing answers along with JP as they struggle to stay alive. There’s no time to stop and enjoy the slower pace of the South as they race from Alabama, to Mississippi, to Louisiana and beyond. No time to enjoy the beauty, the scents, food and drink.

JP’s not the mint julep type. A few beers are more to his taste. His cooking abilities are rudimentary at best. He’s lived the kind of life that meant MREs (Meals Ready to Eat). He’s at home with canned ham, canned vegetables, canned sweet potatoes. Well, at his safe house anyway. Oh, and danger. He’s at home with danger.

Abby is a country girl through and through. She knows how to cook the southern classics, but In the Arms of a Stranger doesn’t challenge her to cook. The story challenges her core belief in herself, her judgment and her sense of trust. She handles a bull named Petunia with as much ease as she handles her fourth grader students. She’s at home on a barely there country road—unless there’s a storm and she gets stuck. Practical and determined, she’s a match and a challenge to JP. A challenge he fights, but she’s tough to resist.

Magnolias are often associated with the South. We’ve all heard of “steel magnolias.” Abby’s experiences cause her to grow into a strong and confident woman. However, I like the symbolism of honeysuckle when I think of Abby. I looked up the lore behind the honeysuckle vine. Love, generosity and passion were the most consistent meanings. And that, I found, was who Abby became to JP.

But back to those things that represent the South. What’s the iconic image that represents the South to you? What’s your favorite southern food? Leave a comment and enter the Rafflecopter for a chance to win. I hope you’ll come along with me on this blog tour. You can easily follow along on the tour by checking my Facebook Page. I’ll post the stop of the day there.

PS-Curious about me? Pop over to World Wranglers today for a look at how the idea for In the Arms of a Stranger came about. 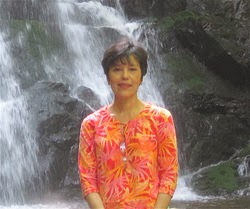 Author Bio:
An RWA Golden Heart® finalist, Virginia Kelly’s first book was published as To the Limit and finaled in several contests such as the Holt Medallion, The Golden Quill and The Aspen Gold.

Virginia has always loved adventure novels, but romance is at the core of her stories—romance with the adrenalin rush of danger. Against the Wind, a full-length novel, and Dancing in the Dark, the prequel novella to In the Arms of a Stranger, are about dangerous men and the adventurous women willing to take a chance on them.

Traveling is a passion that came early in life. Her first airplane ride was a trip over the Andes Mountains in Peru at the ripe old age of two months. Her travels provide the settings for her novels, whether it’s a fictitious Latin American country based on Peru, the country of her birth, or Florida and the American South where she now lives.

A graduate of the University of Alabama with a master’s degree in Library Science, Virginia is an academic librarian. She tries to include a librarian in all of her books as either the heroine or as a minor character. Having taught high school and college, she has a great appreciation for teachers and often uses that as the profession for her heroines.
Contact Virginia: 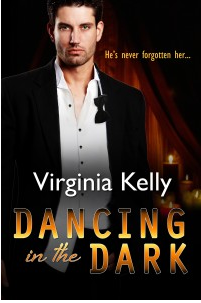