Hello everyone!!!! It's good to be back! Today I'm hosting The Dark Codex Books. Check out the books and have a good time. 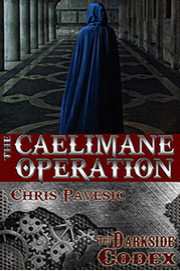 The Caelimane Operation
Southwatch is a steampunk city divided: the rich live in the luxurious airships of the Aerie, while the poor eke out an existence in the pollution-choked streets below. From one extreme to another, idealistic professors, devious aristocrats, mechanicals and fae all struggle for the future of the city they all share -- or just try to survive. The Caelimane Operation by Chris Pavesic is the latest story in The Darkside Codex, a series of stand alone stories which take place in Southwatch.

Released January 16th, this is one story you won't be able to stop reading.

In case you still need some convincing, here's a blurb:
When the Temples to the Goddess north of Southwatch are burned and followers of Dione are murdered, Hierocrat Catherine, a bard of the Caelimane Temple, sets out to find those responsible and to bring them to justice. With only the help of a traveling group of minstrels and a retired fae investigator, Catherine must solve the mystery before more people are killed, but will she succeed when she finds herself pitted against members of her own Temple, rogue members of the Seelie Court, and a seemingly unstoppable army of undead?

You can purchase a copy of The Caelimane Operation here.

And don't forget to join the celebrations for The Caelimane Operation's release! 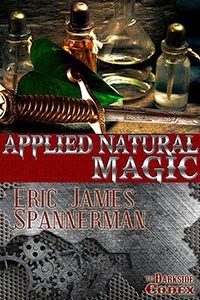 Blurb:
Charles Woodridge is a man pursuing a vision. His advancements in hydroponics promise both to relieve the hunger plaguing the poorest citizens of Southwatch and to propel his ambitions for career, fortune, and family. But when an act of sabotage destroys his lab and his records are stolen, all his dreams are put in jeopardy.

Against a backdrop of riots, class conflict, and criminal intrigue, Charles must decide who to trust: his long-time mentor, Professor Cyril Wainwright; the methodical police detective, Jack Montgomery; or Mira Trevarias, his brilliant, mysterious botanist, a woman with a connection to Charles he does not fully understand. The choice he makes will have far-reaching consequences for both himself and the city. The wrong choice could destroy them all.

You can purchase a copy of Applied Natural Magic here. 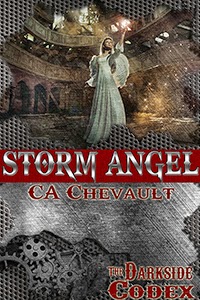 Blurb:
Alysse has just been cast in the role of a lifetime―the lead in a famous opera. But when her sister Leonie dies, Alysse believes her sister was murdered, and vows revenge.

Kyria is an Angel of Steel, who works with Alysse to find the killer. They soon realize that Leonie's death was the opening gambit in a plan that reaches from the industrial districts to the palatial airships of the Aerie, and they need to find its source from the clues left behind.

But what do a dead courtesan, a Fae spy , a hidden cache of jewels, and a cadre of conniving conspirators have in common? Nothing less than a plot to control not only the political power of Southwatch, but that of the Caelimane Temple as well. Alysse and Kyria must find a way to stop them, even in the eye of the storm.

Storm Angel can be purchased here. ,

And don't forget to check out Chris Pavesic's release party for more opportunities to win! 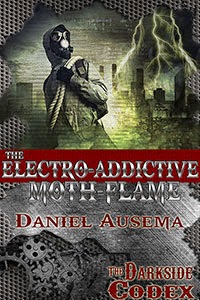 Blurb:
An experimental operation by a shady scientist left Mellia immune to most electrical currents, but addicted to high voltage that pushes her to the edge of death. When she isn't chasing a fix in the factories and tunnels of Southwatch, she is an expert at fixing the wiring in broken gas masks.

A job offer from a professor offers what she needs most: money. As she fixes masks, though, she grows curious about his work. Can he really breed plants that will survive beneath the Dark Cloud of the city? The only way to test his theories is to travel into a region of the Cloud so foul that every mask fails. Running an electric current through the filters might be the last chance to keep their masks working, but that means Mellia has to go along with the professor and his students. Playing with electricity inside the abandoned levels of the city may be the last thing her addicted body needs.

You can purchase your copy of The Electro-Addictive Moth Flame here. 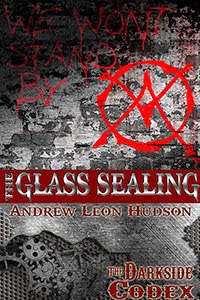 Hot-shot engineer Arthur Singleton is on the verge of achieving all his dreams when they are snatched away from him. His sympathies for the plight of mistreated workers lead him to speak up in their support, but for doing so he is made a scapegoat by the heads of industry, falsely accused of inciting a riot which they orchestrated to keep the people in their place. With his reputation ruined and his career in tatters, Singleton vanishes into the squalid streets of Southwatch, determined to make a difference where it really counts: in the lives of ordinary men and women, forgotten or ignored by those who live in comfort and luxury above the Dark Cloud.

Years later Singleton emerges from obscurity again as a secret leader in the Workers' Movement, an underground protest organisation dedicated to challenging the status quo--but no change comes easy, especially when it threatens the profits of the wealthy. Looking down on their activities is Jocelyn Duville, heiress to a unique airborne transportation empire, who once considered Singleton more than a colleague and was an unwitting player in his wrongful disgrace. Now a darling of high society, Jocelyn is far from a conventional figure herself, refusing to simply marry and give up her independence. She has big plans for Southwatch, a proposal that will change the face of the city and write her name in the history books in the process. But her goals epitomise everything the Workers' Movement struggles against, and they will not stand by and watch without a fight.

However, these are not the only forces at play. Street gangs, the city government, and the strange, inhuman beings that live in Southwatch's deep shadows all have vested interests in the outcome of the building conflict. Arthur Singleton and Jocelyn Duville will face off across a chasm of class, each wielding very different kinds of power--unaware that they are pitted against each other, and of the terrible consequences their actions will have on the city they both love.


You can purchase a copy of The Glass Sealing here.