My name is Warren Davis, and I'm one of the characters from the Knights of the Darkness Chronicles.  D.N. ask me to stop by and do a series introduction to all of you here on this cool-ass blog, so here I am. Where can I start? Well, how about this, if you love vampires and shape-shifters and you think you've read all of the great fiction out there pertaining to the two, you simply must check out the Knights of the Darkness Chronicles. It's going to blow your mind.

Now, don't think I'm just pushing the series because I'm a character and I like the attention I get when readers gush over me. It's not that. I truly want to expose this series because it's freaking awesome. The things that happen in each book will not only shock you, but it will keep you glued to the pages until each book is finished.

*Do you love action? Well, you're going to get a ton of that in the KOTDC.

*Do you great sex scenes? Oh there's plenty of that and I'm not ashamed to say, I do work it. I don't play when it comes to my between the sheets action, if you catch my meaning. * wink *.

*Do you love vampire and shape-shifter politics and customs? I do, too. You'll love where D.N. takes these ideas and makes them her own... or rather ours.

*Do you love intelligent, sexy and witty characters that are so well-written, you forget you're reading a book because you're so invested in our lives? Yeah, it's like that.

The Knights of the Darkness Chronicles is unlike any urban-fantasy you've ever read before. There are no main characters. According to D.N., she wanted to explore the entire world she created, and didn't want to limit the perspective to just one or two characters. And that's great for not only myself, but for all of my family and friends in the series. We all get so much exposure and I think that's so unique. There are GBLT characters as well as straight, so be prepared to see some pretty steamy scenes and extremely interesting and intricate relationships.

When you pick up Desires Unleashed, which is the first book in the series, you'll be introduced to my partner, Matthew and of course, Yours Truly. Take a front seat ride with us as we investigate a series of gruesome murders plaguing our beautiful city, Chicago. If it's one thing I hate, it's seeing innocent people being hurt or killed and I swear, I'm going to catch the SOB who's been killing in my city... as soon as I find out who or what is behind the murders.

Will you join me on this adventure?

Trust me, you won't regret it. 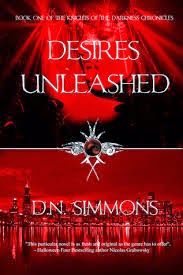 Blurb:
Desires Unleashed is the first novel in the riveting, highly addictive and sexually-charged Knights of the Darkness Chronicles. Experience the heart-pounding thrill of the chase in this electrifying page-turner as you uncover the mystery behind the series of gruesome killings that have been terrorizing the citizens of Chicago.

With mutilated bodies being discarded all around the thriving city of Chicago, the highly-trained, government-funded police force, better known as the S.U.I.T., has assigned two detectives to discover who or what is behind the series of gruesome murders. Soon into their investigation, the detectives realize that they are in over their heads and if they are going to stop the menace before the next attack, they are going to have to seek the help of two unlikely individuals.

Original, sexy and gritty, the Knights of the Darkness Chronicles will suck you in and take you for a ride you won't forget!

Buy Links:
Amazon US: Desires Unleashed (Knights of the Darkness Chronicles (Book One) 1)


Hello,
I’m very honored to be here and I can’t tell you how much I appreciate this opportunity to meet new readers.  My name is D.N. Simmons and I’m an urban-fantasy/paranormal romance author. My series Knights of the Darkness Chronicles is phenomenal, sexy, highly entertaining and completely addictive… well, that’s what I’ve been told. Who am I to disagree *giggle*.  When I say that my series is unlike any other, I really mean it. You will NOT find another series quite like it in the genre. That was my sinister plan from the very beginning.  I wanted to create a series with a platform that would take readers into a completely unique and bold direction with characters they could relate to. The story lines are original from book to book and they keep you engaged from the beginning to the end.  I know that the shelves are filled with paranormal books, especially those involving vampires and shape-shifters. And if you’re a fan of the genre, like I am, you may think that you won’t find anything too original because the market is already flooded.  That’s only because you haven’t read the KOTDC yet.

See, I’m the kind of person that gets extremely enthusiastic about awesome storytelling. When I finish reading a great book or watching an amazing movie, I’m still buzzing about it. One of the reasons why I get so excited is because of exceptional writing and imagination. I appreciate that so much, therefore, I knew I had to give my readers the very best I could give them.

The Knights of the Darkness Chronicles isn’t just a series you read. It’s a series you experience.  You’ll know exactly what I’m talking about when you grab the first book. :D Trust me.

Excerpt:
Darian walked down the dimly lit hallway until he reached a huge tapestry on the wall. He brushed the tapestry to the side to reveal a small sensor in the wall. He pressed his hand to the sensor screen. As the red light at the bottom of the sensor turned blue, a hidden door slid open exposing an elevator.

Pulling a key out of his pocket, he stepped inside, inserting it into the slot on the elevator panel to start it downward. Three levels down, he exited and walked down another short L-shaped corridor to his private skybox overlooking an octagon-shaped arena. He settled into one of the four comfortable leather chairs facing the clear glass paneled wall. He looked around the arena to see that the soft cushioned seats were already full and everyone was anticipating the tournament. All the bets had been made. One could bet on a fighter per night, thus increasing their chances of winning. Or they could pick a champion to win the whole tournament and receive one lump sum. There was a little less than one hundred million dollars to be won this night, which was very good for an opening night. Darian had already placed his bet on the fighter known only as Draco. Xavier had been most impressed by the fighter’s skill, so

Darian had chosen Draco as his champion.
It never ceased to amaze Darian that the human race would, no doubt, do just about anything for money. They put a price tag on their own lives. Darian had never met one vampire that would name the price of their own immortality. He figured mortals thought they were immortal, that life would always grant them another day. Until, of course, their last day came before they could blink their eyes. Darian no longer worried about having his life snuffed out so easily. It would take a lot more than a virus or blunt force trauma to kill him, of that he was pleased.

The announcer came out through sliding double doors with two beautiful female vampires. Dressed in red sequined bikinis and top hats, white sequined bow ties and matching six inch heels, they stood by his side, hands on their hips. The announcer wore a red sequined tux with tails, matching hat and a white silk shirt with matching gloves. He was a tall male with black hair and pale skin. Though he wasn’t a vampire, he could easily pass for one.

Vampires were always pale before their first feeding. Pale and cold. Then when their bodies are filled and warmed with living blood, they can pass easily amongst the human race. A very observant human could detect the subtle differences in skin and hair textures and the shine of a vampire’s eyes.

The announcer ordered some film footage of the fighters to be run on the huge television suspended over the arena. The crowd ‘oohhhed’ and ‘ahhhed’ as they witnessed the talents of the new tournament fighters. There were a mixture of female and male martial artists and grappling street fighters.

Darian could hear a few murmurs of those who wished they could change their bets. He smiled. Too late, he thought. The footage ended, the crowd hushed, everyone waited for the theatrics the announcer provided. The lights dimmed to darkness, leaving only one spotlight on the announcer. He looked around the crowd as he raised the microphone to his mouth.

“Ladies and gentlemen, tonight you are in for a treat. Once again, we have gathered all of the world’s best fighters to battle it out over the next three days, for a total grand prize of five million dollars!” he said with raised hands.

The crowd cheered and applauded. Darian laughed and clapped as well. He liked the energy from the audience. It was an appetizer to the hunt, or in this case, since he had fed already, it was more of a dessert. Just enough to whet his appetite for the bloody fight that was soon to come.

D. N. Simmons lives in Chicago IL., with a rambunctious German Shepherd that's too big for his own good and mischievous kitten that she affectionately calls "Itty-bitty".

Her hobbies include rollerblading, billiards, bowling, reading, watching television and going to the movies.

She has been nominated at Love Romances and More, winning honorable mention for best paranormal book of 2006. She has won "Author of the Month" at Warrior of Words.

She was voted "New Voice of Today"
at Romance Reviews and "Rising Star" at Love Romance and More.

To learn more, and have the opportunity to speak with the author personally, please visit the official  website and forum at www.dnsimmons.com . D.N. is always interested in meeting new and wonderful people.

Giveaway:
Rafflecopter
Metal Bookmark and Keychain (US Only) and a
$20 Amazon Gift Card