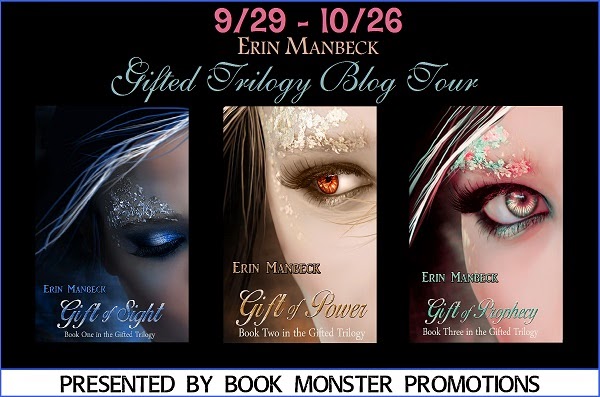 Gift of Sight
“Gifted” Trilogy, #1
Blurb:
Feisty, smart mouth Regan thought that breaking up with her boyfriend Sam was going to be the start of her independence.  Instead, she is manipulated and dragged into a world where sharp, sarcastic wit isn't going to save her.  Turning to her Gram for help, the only remaining relative she has, Regan is upset to find out that her grandmother has been keeping family secrets of her own all these years.

With a vengeful goddess using people to try and bring Regan to the Underworld, Gram brings in three Guardians to protect her.  Given the short version of what is expected of her, loaded with a lot of expectations for her future, Regan knows first-hand that life is too short.  She isn't letting anyone make life-altering decisions for her despite finding out that the vengeful goddess has placed a price on her head.

This book will make you laugh, feel connected to the characters, and leave you wanting more.


Buy Link:
Amazon: GIFT OF SIGHT: BOOK ONE IN THE GIFTED TRILOGY

Excerpt:
Regan could tell he was being sincere, but she didn’t care.  “You said most of the time, what about the other times?  What did you do?”  Regan’s questions were being fired out like a machine gun burst.

Jake was definitely having a hard time finding the right words.  He went with the honest approach.  “Well, on occasion you would just walk out of the bathroom and I would happen to look up and you would be naked.  So yes, I have seen you naked.  Over the year quite a few times, you really have nothing to be embarrassed about.  You are beautiful.”

With a poker face that would have won her millions at the tables, Regan responded, “Take your clothes off.”

“Seriously, it’s only fair.  Take your clothes off, every last stitch.”

Jake couldn’t believe what she was asking.  “Regan, I am not taking my clothes off.”

Suddenly Gram was at her side.  “Honey, why are you screaming?  What are you getting so upset about?”

Regan never took her eyes off Jake.  “He needs to get naked.  It’s only fair.”

“Honey, why would Jake need to be naked to talk to you?”  Even Gram had a bit of a laugh mixed in her tone.

“Over the last year there have been moments where he has seen me naked.  The only way I am going to be comfortable with that fact is if he gets butt naked right now, an eye for an eye, so to speak.”

Piper jumped in to help.  “She’s right, Jake.  I mean, if someone saw me naked like that without me knowing and then I had to work with him or her, you bet their hairy ass I would make them strip.  Come on, Maggie, we don’t want to see that, so we should go back into the kitchen until he is done.”

"You have a hairy ass?"  Regan asked Jake.

"No, of course not, Piper is messing around."

"See, the smart money was on yes because then I might have said to forget this whole thing, but since you said no…get in the birthday suit.  You’re wasting precious time." Despite declaring to those closest to her that she will take her position as Queen, Regan’s first priority is not to rule, but to find her parents.  With Jake at her side, she is determined to learn how to use her new powers and hide from her destiny, as well as the Council, a little while longer.

Unfortunately, someone has been watching and reporting every move Regan makes.  She is disheartened to find out the Council is already eagerly awaiting her arrival in Ireland and have apparently started to plan her future…one that does not include Jake.

Regan must decide just how much she is willing to sacrifice to protect her people from a vengeful goddess, while also weeding out the traitor among them.  In the end, will she have the strength to withstand losing any of them?
Buy Link:
Amazon: GIFT OF POWER: BOOK TWO IN THE GIFTED TRILOGY

Excerpt:
“Lead the way, Buttercup.  No, stop, don’t like that nickname, I have to come up with another one.  Lover, no, ill, I sound like the chick from ‘Saturday Night Live’.  Caveman, yes, that’s the one that still sticks.  Lead the way, Caveman.”

“I rather enjoy Caveman, now move that ass, and stop pussyfooting around.”

“Hey, if I’m supposed to be watching my language, you can’t flaunt it in front of me like that.”

Jake eventually just grabbed her hand and started to pull Regan out the door.  “What’s wrong with the word ass?”

Regan decided that being pulled didn’t suit her, so she double-timed her steps in order to walk side by side with Jake.  “No, you said the P-word.”

Jake thought about it for a second and finally just started laughing.  Regan sighed, “At least we look natural, you laughing at me, me wondering why?”

“Because you can drop the f-bomb, but I can’t say pussyfooting because you flipped it into a dirty word.  If I said pussycat, what would that do for you?”

“Will you stop it?  It’s the P-word and women don’t like that.  Fu, I mean never mind other women, I don’t like it.  Don’t use it even if we are standing by a p-willow tree.”

Jake, while still laughing, wrapped her in another big hug.  “My mission has been accomplished.”

“What mission would that be you p-word abuser.”

“I got you distracted enough to get you into position.  Piper and Maggie will be out soon.”

Regan surveyed the area and then her stomach flopped.  “Oh shit.  I really hope it’s a friendly cat?”

“I’m sure it will appear to be a friendly pussycat, but don’t let looks deceive you.  Damn, why did you just hit me?” Gift of Prophecy
“Gifted” Trilogy, #3
Blurb:
Regan’s arrival in Ireland may have heightened her powers, but it has also given Agrona and her minions more cause to make sure she never makes it to her coronation.  With every attack and the harsh welcome she receives from the council, Regan is more determined than ever to prove why the deities have chosen her to be the Queen.

Although, part of her has accepted that she may have to make the ultimate sacrifice, it isn't until Regan finds herself in the Otherworld being handed over to Agrona that the reality hits her.  Will Jake and her family survive without her?

Excerpt:
Regan went to the oaken doors and requested them to open.  When they did, she had Piper drag Edana across the threshold.  When they sealed shut, she placed her hands on the doors.  The eyes were aglow and the voices were in her head before she could address them.

“How may we be of service, Queen Regan?”

She spoke for all present to hear.  “How about explaining why you let this woman in the castle.  Did you not say you would protect me?”

“We will always protect you, but we too have our limits.  She is a goddess and we cannot deny her entry.”

Before they could answer, a laugh echoed behind her.  Regan slowly turned her head, while praying that the laugh didn’t belong to the woman she thought it did.  “You heard them, Queenie, I am a goddess, and they can’t stop me from entering.”

Not knowing what to expect, Regan’s mama bear came out.  “Piper, get the hell away from her, NOW!”

Piper went to walk away, but Edana grabbed her and pulled the small dagger from off her waist.  She held it to Piper’s throat.  “Not so fast, warrior.  I like you.  You would make a good addition to my floor collection.”

Piper’s eyes were wide.  “What the hell is she talking about, Regan, and why is she suddenly stronger than me?”

Regan’s mind flashed back to a different scene.  She was once again watching Abram as he held a knife to Gram’s throat, while she stood frozen to the spot.  She couldn’t let this happen again.  Shaking off the cowardice that was just at her fingertips, she knew she had to save Piper.  “Agrona, I see you are practicing with others.  Do you think that is going to help you?  I won’t give myself over to you.”

Piper whispered a holy shit, while all the Knights just gawked at what Regan had just said.  Agrona let out another laugh.  “Oh, Queenie, you are so smart, but so foolish.  You could save them all if you come with me now. 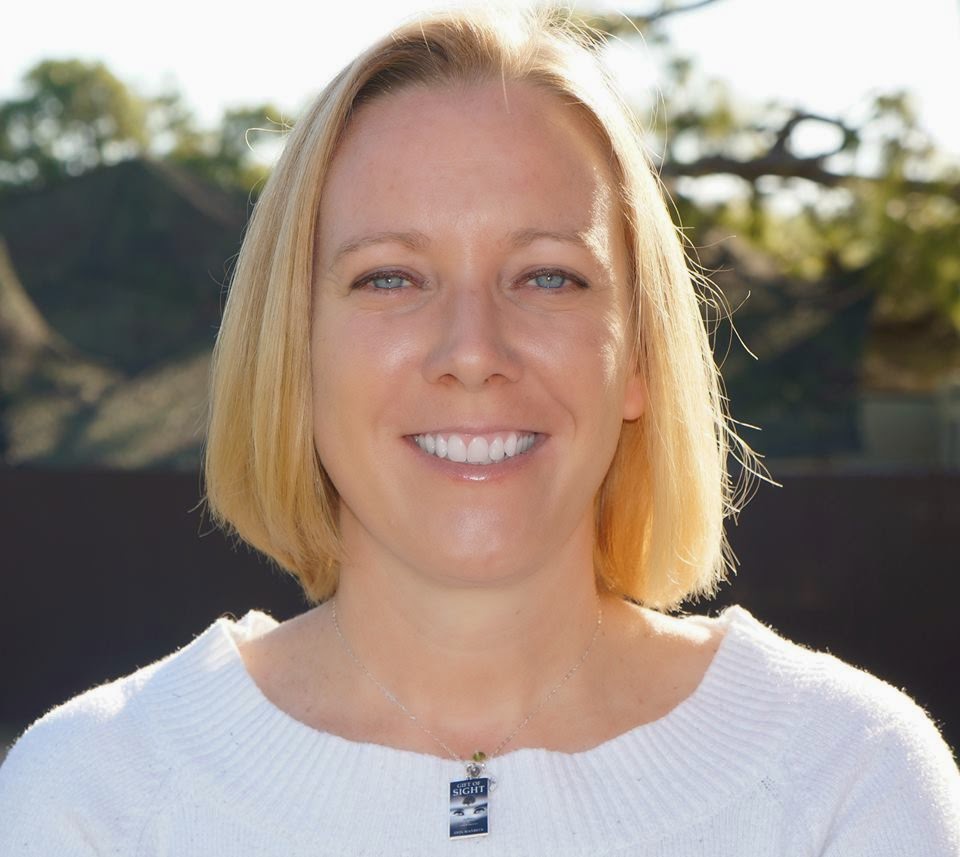 Besides family and friends, I love to laugh.  It may be at the expense of those I love, but they get me, so I usually don’t offend too much.

Honesty…I can’t help it.  I usually say way I feel, but with a little guidance, I’ve learned to be more tactful.

I’ve worked in plenty of environments (trucking company, correction officer and I was in the military to mention a few) so I guess you can say that’s where my mouth and attitude come from.  Either way, as long as I get my morning cup of coffee people are safe.

The Trilogy is complete and I also have a new stand-alone book called “Dreamless”.  It’s a Paranormal Suspense that’s a bit lighter on the language, but will keep you guessing who the Nightmare really is.

RUNNERS UP:  3 Runner ups:  Signed Copy of the Entire Trilogy

Monday Oct 6
ParaYourNormal
Queen of All She Reads

Thursday Oct 16
For Whom The Books Toll