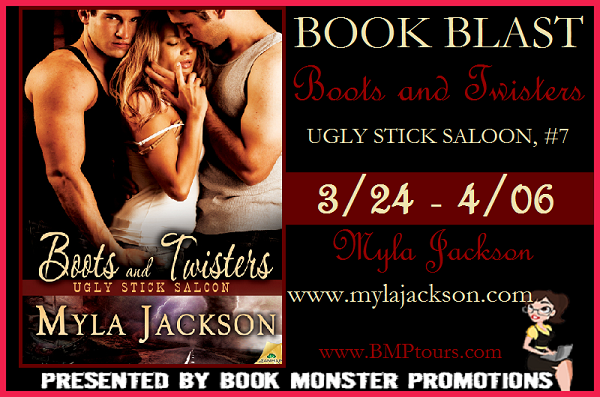 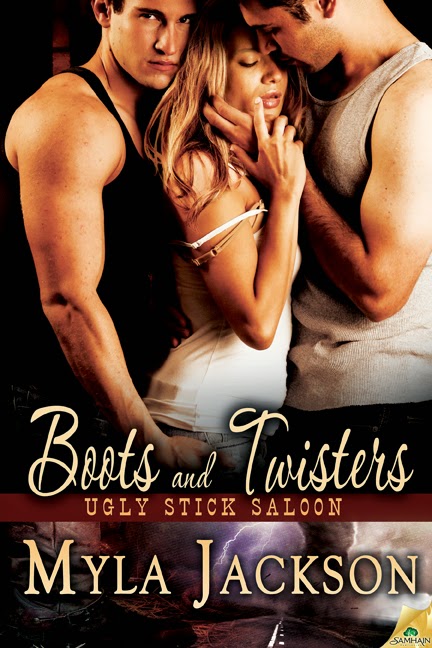 Blurb:
Welcome back to the Ugly Stick Saloon!

Two ranchers are about to get Lucky—in more ways than one.

Lucky Albright’s unlucky streak is so long and wide that she’s been run out of one town and it looks like it may happen again.

When she finds herself out of money and out of gas in Temptation, Texas, a part-time job from the kind owner of the Ugly Stick Saloon gives her a glimmer of hope that this time things will be different.
Trent Jameson and Isaac Moore have always believed you make your own luck, but a black cloud of disaster seems to hover over their new hand. Under a tumbling stack of hay, Isaac discovers what Lucky’s hiding beneath baggy clothes and a tough exterior. Enough sexy curves to satisfy both men’s appetites.

But it isn’t long before Lucky’s history starts wreaking havoc all over town. It’ll take a force of nature to help the ranchers convince the law, the Garden Club—even Lucky herself—that now is no time to hit the road.

Warning: Hot cowboys meet hot cowgirl, and there’s a whole lotta shakin’ goin’ on in Temptation. Get your twist-and-shout on at the Ugly Stick Saloon!

Excerpt:
Copyright © 2014 Myla Jackson
All rights reserved — a Samhain Publishing, Ltd. publication
Trent went to work stacking the hay on another wall, one bale at a time. Halfway through the stack, his muscles burned and he’d worked up a good sweat. He was feeling better and had almost forgotten the woman at the saloon.

With several tall columns of bales leaning against one wall, Trent was about to start a stack in front of them when a noise made him turn around.

A slim figure in jeans and a chambray shirt entered Thunder’s horse stall.

Thunder hadn’t been ridden since Dusty the ranch foreman had been tossed and ended up in the hospital.

Trent started to say something to the new ranch hand about the horse and his temperament. Before he could, the hand emerged, leading a placid Thunder out by his lead rope. If the horse had an attitude, it wasn’t on display that morning.

The cowboy had his head dipped, his cowboy hat pulled low. Between the dim lighting in the barn and the shadows from the rim of his hat, Trent couldn’t see the cowboy’s face. Covered in sweat and hay, Trent didn’t feel much like introducing himself yet. But he watched as the young man led the horse out of the barn. A few minutes later, he returned and entered the stall with the wheelbarrow, and soon had a pile of soiled straw loaded into it.

Trent resumed his work on the hay, keeping a watch on the new guy from the corner of his eye.
One stall after the other the young cowboy worked. When he completed the last stall and was pushing the last wheelbarrow load of soiled straw toward the door, Trent decided it was time to inspect the job and introduce himself.

“Wait up, there.” Trent tossed the bale he’d been carrying, dusted the straw off his gloves and crossed to the ranch hand. He glanced past the man’s shoulder into the cleaned stall and noted it was cleaner than he or Isaac usually got it. “Name’s Trent Jameson.” He held out his hand. “Nice work you’ve been doin’ there.”

For a moment the cowboy froze. Then gripped Trent’s hand with his own gloved one. “Thanks.” The cowboy refused to look up, keeping his chin tucked in, his head lowered.
Trent couldn’t look the man in the eye. He didn’t trust a man who wouldn’t look him directly in the eye. “You got a name?”

The ranch hand shook his head and tipped his hat lower over his head. “I better go dump this.” As he hurried around Trent, the wheel ran over Trent’s toe.

“Ow!” Trent yanked his foot back and teetered on one leg.

“Oh my gosh!” The cowboy’s hands flew in the air and the wheelbarrow dumped over, the contents rushing out, knocking Trent backward. He slammed into the freshly stacked hay bales and they swayed.

Trent glanced up, his breath hitching.

“Oh no.” The young cowboy launched himself at the hay, tripped over the pile of dung and straw and, instead of catching the bales before they toppled, sprawled out on top of Trent.

The bales tipped and fell, one after the other, landing on or near them.

Several grunts sounded from the cowboy who took the bulk of the pummeling.

His hat flew off and long sandy-blonde hair tangled with the loose hay flying around the interior of the barn.

Trent blinked the hay and dust out of his eyes and stared up into pretty gray eyes, the color of storm clouds. “You!”

The woman he’d been dreaming about kissing planted her hands against his chest and tried to push herself off him.

He opened his mouth to admit he thought he’d never see her again. Thinking better of it, he demanded, “What the hell are you doing here?”

“Working.” Jerking her leg out from under a heavy bale, she managed to roll off him and onto the ground. “What does it look like?” As agile as a cat, she shot to her feet.

“Isaac hired me as the new ranch hand.”

“What?” Trent stood and stared at her.

“Is it so hard to believe a woman can be as effective and efficient at ranch work as a man?”

“No, you didn’t have to.” She stood, brushing the hay from her jeans but missing the straws stuck in her hair. “Now, if you’ll excuse me, I’m going to get to work cleaning this up.”

“I didn’t say I agreed with Isaac’s decision to hire you.”

She planted her hands on her hips. “You gonna fire me?”

“Well, until you say otherwise, I have work to do.”

Trent climbed over the bales to stand in front of her. “Like I said last night. You’re trouble.”

Something clouded her already stormy eyes. “Maybe, but I work hard and I know my way around a ranch.”

She grabbed a bale and threw it up onto the stack.

“I gathered that.” And she was beautiful with fire in her eyes and hay in her hair. Trent worked alongside her until they had all the hay stacked in neat rows. When they were done, he brushed straw off his body and grinned. She’d worked hefting as many bales as he had. So, she could lift bales.

Lucky flicked hay off her shoulders. “If we’re done here, there’s a fence on the northeast corner of the property I intend to fix.”

“I’ve strung fence with and without help. I can handle it.”

“Maybe so, but we use the buddy rule around here. Unless you’re working around the house or barn, you always take a buddy with you. That way if one or the other is hurt, you have someone there to help.”

She looked at him through slitted eyes. “You’re making that up.”

Her eyes narrowed even more. “When were you ever a Scout?”

His lips twisted. “Okay, so I’ve never been a Scout. But we do use the buddy system. I’ll go with you.”

Her full, soft lips tightened. “How do you usually get there?”

“I take the four-wheeler. You can ride on the back.”

“Is that how you and your partner…er, brother ride out?”

“We usually take a couple of four-wheelers, but one of them is in the shop for repair.”

Trent gathered the come-along, a roll of barbed wire, pliers, a hammer and a couple of metal fence posts and the heavy pounder used to drive them in.

Lucky took half of the supplies and carried them out into the open, then went back for the other half while Trent pulled the four-wheeler out of one of the storage areas in the barn.

Loading what she could in the box on the back, she settled the fence posts over the box and Trent strapped them down along with the pole pounder.

“I’ll get my hat and be ready to go.” Lucky disappeared into the barn.

Isaac joined Trent, carrying two water bottles. He settled them in the box with the tools. “I take it you’ve met our new ranch hand.”

Trent gave Isaac a withering look. “Yeah. You could have warned me.”

“She has the experience and know-how. And from the looks of it, the stamina.” Isaac’s lips twitched. 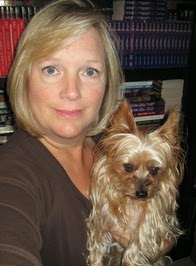 Myla Jackson aka Elle James spent twenty years livin' and lovin' in South Texas, ranching horses, cattle, goats, ostriches and emus. A former IT professional, Myla/Elle is proud to be writing full-time, penning intrigues and paranormal adventures that keep her readers on the edge of their seats. She has 39 works with Harlequin, self published works under pen name Elle James, over 40 works with other publishers including Samhain, Elloras' Cave, Kensington and Avon and 18 works self-published under pen name Myla Jackson. Now living in northwest Arkansas, she isn't wrangling cattle, she's wrangling her muses, a malti-poo and yorkie. When she's not at her computer, she's traveling, out snow-skiing, boating, or riding her ATV, dreaming up new stories. 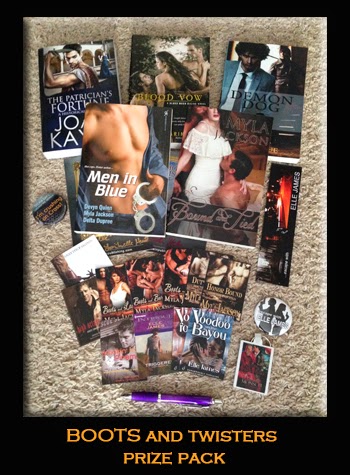