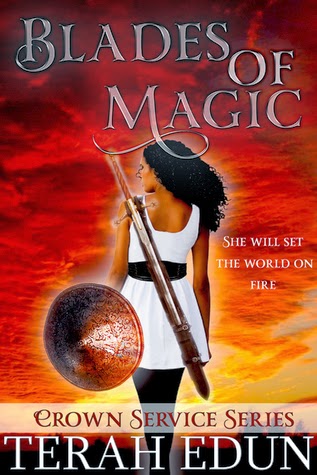 Blurb:
It is not a peaceful time in the Algardis Empire. War is raging between the mages and seventeen-year-old Sara Fairchild will be right in the middle of it.

She just doesn’t know it yet.

Sara is the daughter of a disgraced imperial commander, executed for desertion. Sara is also the best duelist and hand-to-hand combatant in Sandrin. She lives quietly with her family’s shame but when challenged about her family’s honor, her opponent inevitably loses.

On the night she finds out her father’s true last actions, she takes the Mercenary Guilds’ vows to serve in the emperor’s army. Using her quick wits and fierce fighting skills, she earns a spot in the first division.

There she discovers secrets the mages on both sides would prefer stay hidden. Dark enemies hunt her and soon it’s not just Sara questioning the motivation behind this war.

While fighting mages, blackmailing merchants and discovering new friends, Sara comes across something she’s never had before – passion. The question is – can she fight for her emperor against a mage who has unwittingly claimed her heart?

This is year one of the Initiate Wars. Sara is hoping it doesn’t become the year she dies.

Chapter Seventeen
It took two days. Two days of Ezekiel not speaking of her. Two days of setting up camp with strangers who glared at her and tried to pick fights. Two days of getting the last of the food from the slop cart because no one would tell her where the mobile kitchen would be located at the end of that evening’s ride. And a day since she fell off her horse because someone had cut the straps on the saddle without her noticing. It had been six-hours since she’d woken up, huddled not in a tent, but on the freezing cold ground where she’d been forced to sleep next to her horse so that she could make sure no one messed with her tack or Danger again. So she gave up her stubbornness. Gave up her pride. She was damned tired of being alone.

She went to look for the only person who might even be half a friend in the entire convoy. She went after Ezekiel Crane. Well, she and Danger went after Ezekiel. The convoy was currently parked on a giant bluff overlooking a crystal clear lake and meadowland. Many of mercenaries were taking the day to enjoy their first bath since leaving Sandrin. Sara was hiking along the bluff looking for a curator who didn’t want to be found with her horse in tow. She couldn’t trust the horse wranglers to look after Danger like the other mercenaries could. Mainly because everyone seemed to hate her from that one outburst the first morning she joined.

So she led Danger by the reins with her scimitar strapped to the left side of the saddle, her sword on her back and her knife at her waist. She had ridden Danger up the slope but it was more of a problem getting down. The slope was slippery, littered with rocks, and had a steep incline. Making it hard for a horse to get down without breaking its legs. She knew the wind mages and earth mages of the guard would work together to make a smooth incline when they were ready to leave. The way it was now was just a defensive tactic that would slow down any enemy’s forces.

They were a further three days out from the nearest deployment site and Sara had to wonder who or what Captain Barthis Simon feared that he would stick his entire mercenary regiment atop a hill with defensive rings all round them.

Sara shrugged irritably at the thought, It’s his problem, not mine. We’re sitting ducks up there. All it would take would be for one enemy soldier to get the brilliant idea of starving us out and we’d die on that hilltop.

That was part of the reason she was heading down. That and the solace of Ezekiel’s company.

“Crap!” yelled Sara as her foot nearly slid out from under her. She refocused on getting down the hill without breaking her neck.

As they eased down, Danger whinnied anxiously.

If he could talk Sara had a feeling he’d be saying, “I’m a warhorse, not a mountain goat you idiot.”

They came close to a few tumbles, with the earth sliding out from underneath Danger’s hooves and the gelding almost pulling her down the slope with him. But they regained their footing and made it to the base. When they did he gave the loudest snort she’d ever heard.

She reached a hand up towards his nose. Danger tossed his head away from her, refusing to let her pet him.

“Fine,” said Sara. “You’re welcome to be mad at me too. But make no mistake, you’re coming.


Author Bio:
Terah Edun's next YA Fantasy novel, BLADES OF MAGIC - Crown Service Book #1 (set in the Algardis Universe), will release on March 31, 2014. Book Five of Courtlight, SWORN TO DEFIANCE, will release in April 2014.

Check out Terah's author website (teedun.com) for more information about her books, find her online @TEdunWrites and subscribe to her newsletter (bit.ly/SubscribetoTerahsNewsletter) to be notified of upcoming releases.