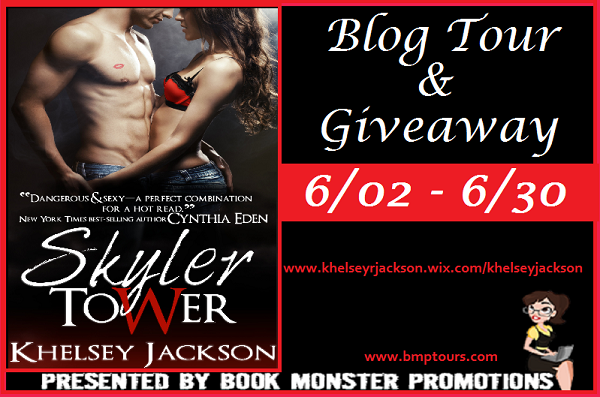 Welcome to my stop on Khelsey Jackson's Skyler Tower Blog Tour & Giveaway presented by Book Monster Promotions. Please fill out the rafflecopter form for your chance to win.


Favorite Scene
SKYLER TOWER has many sexy scenes but I have one scene that was my favorite.  It is in the first chapters and it’s when you really get to meet Evangeline and Angelo. They are in her office doing an interview for his paper. But she can’t keep her mind off of how she is attractive to him.

"Stand up," he ordered. Evangeline narrowed her eyes at his show of dominance.

"Kneel," she said with a challenge in her voice. She thought he would laugh at her or demand her to do as he said. She knew when she was staring at another dominant. Sitting a little taller, she kept her eyes on his, never wavering.

Leisurely, he dropped to one knee in front of her, and she licked her lips knowing what was coming. She did not move. Evangeline waited for his lips to capture hers; steadily, he leaned forward and kissed her neck. His scorching mouth hovered above hers, and his eyes seemed to burn through her. She couldn't take it anymore. She wanted his lips on hers, so she seized his tie and pulled him to her. Their lips molded together, and her eyes fluttered closed. His tongue licked her bottom lip seeking permission. Opening her mouth, Evangeline moaned when his sinful tongue found hers. Her hands traveled up to his raven black hair, and she tangled her fingers to hold him to her.

His arms snaked around to her back, and she knew she wanted him. It had been six months since she had taken a lover to her bed, and that was the longest she had gone since she lost her virginity. He tore his mouth from her, and she groaned.

"I want you," he said, saying the words she was terrified to say. "But I won't take you here in your office." She frowned at him because that wasn't what she wanted to hear; she wanted him naked and inside her.

"You confuse me," she confessed and he stood up. Her eyes went to the large bulge in the front of his pants causing her mouth to go dry.

Angelo placed his hand in front of her, and she took it. He smiled down at her illuminating his dimples again. "I am not the guy that fucks someone in an office. I want to take my time with you, and I could not here." He took the hand he was still holding and placed it on his bulge. "I want you, but I also want to do this right." 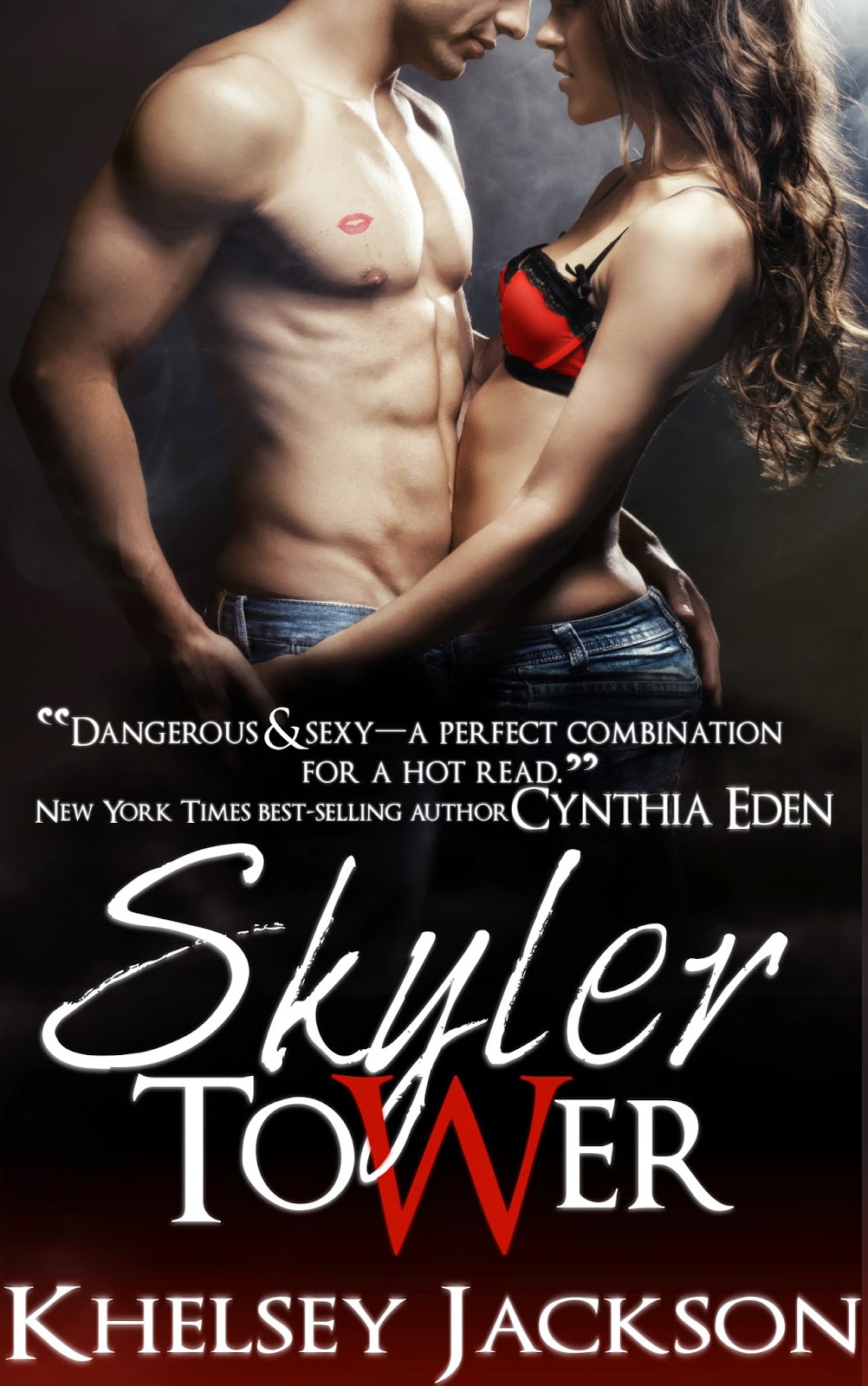 Blurb:
She is terrified of relationships….

Evangeline Skyler has acquired everything she wanted in her life, she is a successful C.E.O. of Sky Tech. The only thing she doesn't have is a love life. When she meets a gorgeous dark haired man in a grey suit he starts to unravel her.

Angelo Giovanni is there to interview the beautiful but secreted Ms. Skyler. When he sees her he is stunned, her pictures don’t do her justice. He will do anything to be the one she turns to.

Someone is stalking her…

But when someone starts stalking her and sending her creepy messages she turns to her long time driver and friend Axel Roberts.

Who will be the one to steal her heart, and the one to break her trust?

She devoured his mouth with deep sweeping strokes of her tongue causing him to groan in her mouth. She loved knowing she was the reason for that groan, and hoped she would make him groan and moan later. But right now all she could think about was his lips on hers. He spread his hands wide on her back and moved one hand up to the middle of her back and the other one to cup her bottom.

He held her tighter to him, and she felt his excitement against her stomach as she pulled harder on his hair to hold him closer. Never had she wanted someone as much as she wanted Angelo Giovanni. He drove her crazy.

When he tore his alluring mouth from hers, and he stared down at her something flashed in his dark eyes. "We need to get a bedroom now, I want to be with you in the bed not against the front door."

She laughed and shrugged. "I would never look at my door the same again."

She smirked and moved passed him. "Follow me," she said and started to saunter up the stairs to her bedroom.

Once in her bedroom she kicked off her shoes and shrunk five inches, but he was there with his hands teasing her bare arms. She adored the feel of him touching her, she had not been touched like this in so long. He dropped to his knees in front of her and looked up at her.

"Your beauty could weaken men," he said as he slowly started to lift her dress. "I have never wanted something this bad and I am afraid if I don't have you now I will lose my mind."

"Then take me now, I don't need or want foreplay." He stood up but kept the hem of her dress in his hands. He deliberately took his time taking her dress off and she was left standing in front of him in her white push-up bra and lacy boy shorts.

"I am one lucky man to see you like this," he said and ran his soft fingers down to the dip in her cleavage. "You are the most beautiful women I have ever seen." He dropped his head to her breast and lightly kissed her and he repeated the same action to her other breast. He brought his eyes to hers as he unclasped her bra, and let it fall to the ground at her feet with her discarded dress.

His scorching sinful mouth closed around her nipple causing her to arch into him. "I want you now," she barely recognized her own voice. He glanced up at her and she felt him take her underwear slowly off of her leaving her completely naked and him still fully clothed. She bit her bottom lip and wondered how much she could be in control with him. "Undress for me." She kept her voice even and gradually backed up to her bed and sat down.

He narrowed his chocolate eyes but a smile played at the corner of his lips. He brought his large hands to the base of his shirt and quickly removed it, his bronzed sculpted chest was within reaching distance from her. She knew she was staring at a work of art as he had spent countless hours making himself look marvelous.

She licked her lips when his hands unbuttoned his pants and he slowly removed his dark color pants. Black briefs were under and she could see how large he was.

She reached in her nightstand and pulled out an unopened box of condoms, Angelo smirked down at the box in her hands. "Were you ready for tonight or do you always keep an unopened box next to your bed?" his accent seemed thicker than it was when they first started the night.

She liked to be prepared even if she wasn't having sex so she enjoyed being the one with the condoms. She was on birth control but had never had sex without protection. "I like to have safe sex." He arched his eyebrows but took the box out of her hands and opened it to pull out one of the black wrappers. He took off his underwear and her mouth grew dry. He was bigger than she thought. Yes, she had been with men that were well endowed but he put her largest lover to shame.

She enjoyed watching him slowly place the condom on him, and then he took her by surprise by not going to her but laying on his back on the bed with his hard cock jetting up.

"You are in control, Evangeline." He rested his arms behind his head and gazed at her challenging her. She grinned and crawled to him, then she placed one leg over him and leaned forwarded to brush her lips against his.

Unhurriedly she started to rub herself on him, and deepened their kiss by twisting her fingers in his hair. He moaned when she lowered herself on the tip of him and she slowly moved up and down on him. Taking him slow, she could still feel him stretching her. She opened her eyes and found him staring at her, and she knew at the moment she would do anything he wanted to have this again.

His hands found her hips and he gently lifted her up and down; she threw her head back and moaned as she grind on him.

"You look even more stunning when you are on the edge of your release." She brought her eyes back to his and was speechless. She wasn't sure what to say to that, and didn't have time to respond because he flipped her to her back. "I love your slow and easy but I want to make you scream for me, Evangeline." She wrapped her legs around his waist and hooked her ankles together.

He grinned down at her as he started to move faster in and out. One of his hands rubbed and slightly pinched her clit. She felt her release building and she gasped. She wasn't going to last too much longer and when he arched his hips up a little hitting her spot she couldn't stop herself from exploding around him. Angelo dropped his head to her shoulder and bit down when he slammed into her groaning her name. 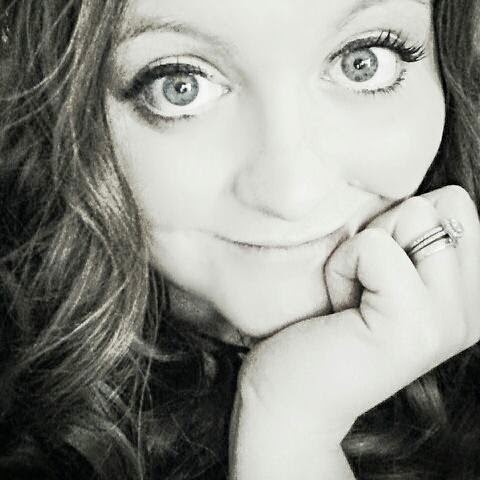 Khelsey hails from the Sunshine State (California) but moved to Minnesota when she was 11 years old. Her grandmother raised her and her brother. When she was 18 she did what any sane teen would do and moved to the city of sin, Las Vegas NV. There she met her handsome husband and the rest is history. She loves to read, and will read almost anything guess when you have read just about everything, the only next logical step is to write

Wednesday June 18
For the Love of Bookends

Thursday June 19
For Whom The Books Toll

Saturday June 28
In The Pages of a Good Book