Why do I love writing so much? Because I get to live in a fantasy world.
I’m lucky that my characters take me to some pretty wild places and do some equally wild things…

But I’m also an avid reader.  I devour books; have ever since I was a kid.
I read widely, across genres and could happily spend a day/week/month curled up with my nose in a book.

For me, part of the appeal of reading is getting engrossed in another world, being so absorbed in the characters’ lives that I’m almost there alongside them, laughing and crying and feeling their pain.

It’s sheer pleasure to be swept up in the fantasy as I turn the pages, eager to reach the end yet reluctant to do so because I love the story so much.

In CROSSING THE LINE, Mia gets to live out one of her fantasies: geek girl turns bad. And thanks to Kye, the sexy Aussie bad boy, the fantasy just gets better and better!

Embracing fantasies can be liberating and exciting. But it’s those deeper fantasies, the emotional ones we crave like security and love and recognition that can be the most challenging of all.
At least, that’s what Mia and Kye discover…

Now it’s over to you. Share a fantasy (keep it clean, please!) in the comments.  It could be a fantasy date, fantasy dinner, fantasy destination, fantasy celebrity.  Go ahead, use your imagination. 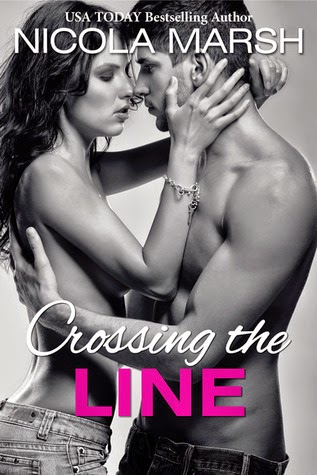 Blurb:
Laying it all on the line for love…

Mia Cresswell is tired of being good.
Achieving geek status at college doesn’t equate with fun. So when she heads home to her dad’s tennis academy in Santa Monica on spring break, she’s determined to be bad. And hot Aussie tennis star Kye Sheldon is just the guy to help her do it.

However, Kye’s troubled past continues to dog him and attending the Cresswell Tennis Academy is his last chance at the big time. He can’t afford to screw up…by screwing the boss’s daughter.

But Mia and Kye’s relationship is much more than a vacation fling.
Will it be game, set, match, when the truth is revealed?
Or will Mia and Kye have a real shot at love all?

I turned toward the girl's voice as she stepped out of the shadows, not sure what annoyed me most. The intrusion or the way she sauntered toward me, all long legs and cocky smile.

She was just my type: tall, sexy brunette with enough hip sway to make a guy wonder what made her so confident, and bedroom eyes that hinted at sin.

Sadly, this devil had just landed in the City of Angels and sin was the last thing on my agenda.

"I'm not in the mood for company," I said, expecting her to head back inside.

She didn't falter as she strode toward me. "Too bad, because I needed some air and this terrace is big enough for the both of us."

I could've left but there was something in the way she was staring at me that had me intrigued: like she wanted me but wouldn't have a clue what to do if she got me.

"Kye." I reluctantly shook her hand. "Wish I could say the same."

"You don't like girls?" She slid her hand out of mine, the insolent quirk of her lips making me want to do something I shouldn't. Like kiss the smirk off her smart mouth.

"Love women." I took a step back, staring at her feet and slowly sweeping upward in a deliberate perusal meant to make a point. I wanted to make her squirm. It backfired, as I noted red nail polish matching her towering shoes, slim ankles, long legs, tight black dress that ended mid-thigh and hugged her lean bod, and pert tits. The frigging dress had a front zipper that just begged to be undone. Beyond hot.

By the time I reached her face, she was blushing.

"So which am I?" She leaned forward, giving me a generous glimpse of cleavage. "Girl or woman?" 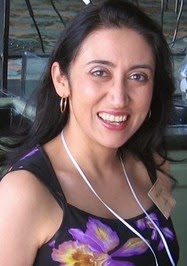 She has published 45 books with Harlequin, Entangled Publishing and indie, and sold over 5 million copies worldwide.

Her first mainstream contemporary romance, BUSTED IN BOLLYWOOD (Entangled Publishing) released to rave reviews, including a nomination for RWA's RBY, Romantic Book of the Year 2012.
Her first indie-pubbed contemporary romance CRAZY LOVE released September 2012, is a Barnes & Noble bestseller, and was nominated for a 2012 ARRA award.