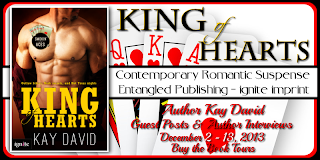 Welcome to For Whom The Books Toll. Today I'm hosting Buy The Book Tours Kay David and her book, King of Hearts. Thanks for stopping by today Kay and sharing your guest post.

This is my ninth installment of what happens to my hero, King Landry and heroine, Jessie Delacourt, before King of Hearts, my latest Ignite from Entangled begins. Keep track of the story by staying on top of the blog schedule posted on kaydavid.com and buythebooktours.com.
A wonderful pair of earrings will go to one lucky commenter!
Sex on Fire.
The Ice House made sure it played the kind of music its clientele demanded. For the most part that meant Southern rock; the Allman Brothers, ZZ Top, even a few Elvis songs. Tonight the local band was managing a pretty good cover of the Kings of Leon song. The lyrics were so appropriate for how he felt, he had to hold back a laugh.
Hot as a fever, rattling bones… If it’s not for forever, if it’s just for tonight…
He’d never hear the song again without thinking of Jessie Delacourt.
He thumped his beer to the bar then took hers from her hand and did the same, pulling her toward the dance floor. He’d thought before about how her jeans so tight he wasn’t sure how he’d get them off. But off they would come, he decided then and there. He knew that as surely as he knew where he was and what was happening, the music be damned.
An American Aquarium song, Brother, Oh, Brother, filled the room next.
This song was just as ironic as the first one, King thought. The lyrics floated through the smoky air. “My daddy lived by the gun,” the band sang, “and his daddy did, too.”
King’s old man had been a lawman, and King had ended up the same. King balanced between two realties, the righteous and the lawful, which didn’t always mesh. His father, on the other hand, had always walked the lawful side of the law. He’d be ashamed of King for the revenge he sought, but even that wasn’t enough to stop him. He shook his head and concentrated on Jessie instead of the danger ahead.
What kind of music did she like? She didn’t listen to Lady Gaga, he was pretty sure. Or maybe she did, he amended. Poker Face, he thought, because she wore one for sure. Right now, all he could see was the sexy body and clinging outfit. If she had any emotions, they were well hidden.
Later, King realized the perfect song for that night would have been Jessica by the Allman Brothers.
It had no lyrics, just secrets.

What’s a song that reminds you of a special night? Does it make you want to listen to the song all the time or turn off the radio when it plays? Keep reading to learn about Jessie’s special song and the special night that’s to follow. 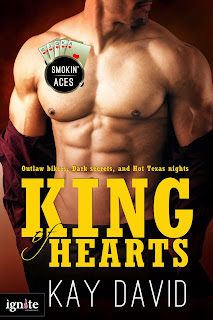 One night with bad-girl biker Jessie Delacort should have been enough for straight-laced cop Kingson Landry. But she got under his skin and hasn’t let go. Discovering she’s an undercover Texas ACES agent makes it even harder to resist her. But he must, because his past could kill Jessie just as easily as it has the other people he loves.

When Jessie Delacort rides into town on her Harley, the last thing she wants is to fall in love with another man who is hiding secrets too dark to reveal.?But when they’re forced to work together to bring down a powerful drug cartel, Jessie knows she’s got it bad for the quiet cop with the haunted eyes.

When the cartel’s vengeance-driven leader sets his sights on the two of them, King knows he’ll do whatever it takes to keep Jessie safe. Even if that means giving up their chance of turning the white-hot attraction between them into love.


Excerpt #1
“Is he a friend of yours?”  Kingson Landry dipped head to the man standing across the room at the bar.

“I haven’t cultivated any deep relationships here, unless you count Dickie, which I don’t,” Jessie explained.

Their stares met in the smoky light, and Jessie knew he was about to say something that would steal her breath.  His blue eyes turned navy as he looked at her “You need more than friends,” he said, his voice smoldering.  “A woman like you should have lovers.”

Her mouth went dry.  “You don’t know me well enough to say that.”

“We’ve made love.  I think that qualifies as knowing you pretty damn well.”

Her answer held a world of hurt she didn’t intend to share with King or anyone else.

Clearly sensing her reaction, he backed down, his demeanor changing. “You’re probably right.  But I know that you’re gorgeous, smart, someone who has everything going for her.”  He waited a beat.  “If you aren’t involved with anyone, it’s not for a lack of opportunity.”

“Thank you for the compliment. I’m not sure what bearing this has on our professional arrangement.”

“It doesn’t have any,” he said.  “But I want to know something about a woman if I’m about to kiss her when it’s the last thing I should do.”

Her breath caught as he reached for her.  A moment later, he stilled, his eyes going dark as he froze.  He spoke as if to himself.  “This is crazy.  What in the hell am I doing?”

“I don’t know what you’re thinking about…”  Her voice was husky. “But it’s too late to quit now.”

She yanked him to one side, and they tumbled into the darkness of the alcove behind them.  Whatever had made him pause clearly forgotten, he trapped her against the wall, his hands on either side of her, his hips pressing hers.

When he crushed his lips to hers, Jessie lost control.  Opening her mouth, she allowed the kiss to deepen and moaned, the sound lost in the tiny space that enclosed them.  Echoes of what they’d had—of what couldn’t be repeated if she had half a brain—sounded an alarm inside her that she instantly ignored.

Dropping his hands to her shoulders, his fingers explored her skin.  The burning touch left a trail of heat as it dipped to the tops of her breasts revealed by her tiny camisole.  She wanted, no, needed, to immerse herself in his warmth, and she lifted his shirt, slipping her palms underneath it.

She tried to slow down, warning herself to stop while she could, but it was a useless gesture; Jessie hadn’t been strong enough to resist King’s appeal before, and she wasn’t now.

When she’d decided she couldn’t take another second of his mouth on hers, he lifted his lips and cursed, yanking her to his side and tucking her behind him in single swift move.

She spoke without thinking.  “What the hell—?” Kay David is the author of over thirty-five romantic suspense novels. After enjoying a variety of careers including computer programming at NASA, custom home building and working in the oil and gas industry, Kay admits that writing has always her been her first love.

Living in such diverse countries as the United Arab Emirates, Argentina and Bolivia has made Kay appreciate her own great home in Texas while allowing her to add intimate details to her books of the exotic settings she knows firsthand.

The Giveaway:
A beautiful pair of sterling silver earrings that are very similar to a pair that plays a pivotal point in King of Hearts. 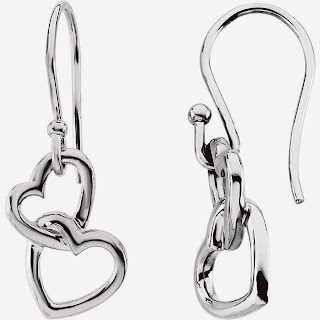 Friday, December 13, 2013
Blogging the Beloved {Author Interview}
Romance Me {Guest Post}
Posted by Unknown at 12:00 AM