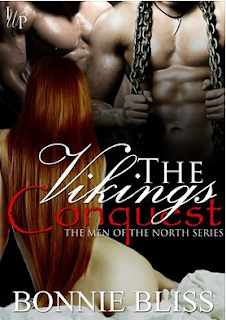 After discovering she was claimed to pleasure not just one man, but two, Varona is thrust into a dilemma—becoming the obvious plaything to two very dominant Northmen. When faced with being forced into domestic submission, Varona decides to show them just how useful she can be outside the bed. Caught, out in the open, hunting behind the brothers’ backs, punishment is in order for the hot-headed Varona. Only this time, the punishment will be coming from two men—in the middle of the forest.

The second installment in a serial series, this erotica story will bind you to two incredibly dominant Vikings.

Email ThisBlogThis!Share to TwitterShare to FacebookShare to Pinterest
Labels: Bonnie Bliss, The Men of the North series, The Vikings Conquest