Hello and welcome to my stop on the Sweetest Taste of Sin by Danica Avet Book Blitz. And there's also a giveaway. So sit back, stay a while, relax and enjoy your visit to For Whom The Books Toll. 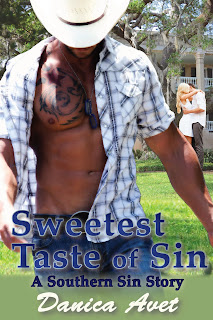 Blurb::
Logan Guillory finally has what she’s always wanted, a loving, sizzling relationship with J.B. Calhoun. So why can’t she shake her overwhelming need for his twin brother Anthony? Her small town morals tell her it’s not normal to love two men with equal fervor, but not even the risk of damaging her standing in Grand Terre, Louisiana can make her stop wanting to be possessed by them both.

Anthony ‘Ant’ Calhoun had his eye on Logan long before his brother entered the picture, but now he’s lost his chance, or so he thinks. J.B. has other ideas, which includes sharing Logan’s sensual caresses and big heart with his brother. Torn between overwhelming need and fear of the scandal that might ensue, Ant resists with all his might, but doesn’t stand a chance against the needs of the two people he loves most.

Giving in threatens everything they all hold dear, but who can resist the sweetest taste of sin?

Note: Contains scenes of one woman being properly seduced and thoroughly enjoying it by not one, but two men who happen to be twins. Very sexy, hot twins.

Danica Avet was born and raised in the wilds of South Louisiana (that would be somewhere around Houma) where mosquitoes are big enough to carry off small children and there are only two seasons: hot and hotter. With a BA in History, she figured there were enough fry cooks in the world and decided to try her hand at writing.

Danica is the lucky pet of a compulsively needy dog and two cats. The pitter-patter of little feet has been known to make her break out into a cold sweat.

Writing is how she gives the voices in her head a way out. When she isn’t writing, working or contemplating the complexities of the universe, she spends time gathering inspiration from her insane family, reads far more than any sane person would want to, and watches hot burly men chase an oblong ball all over a field.

Tuesday Dec 17
All I Want and More

Legal Information:
- Entering this contest means you have read, understood, and agree with all rules and regulations stated.- Entrants must be 18 or older (or age of majority in your country) to enter and to win.- No purchase necessary.- Void where prohibited.- All stated rules are subject to change without notification or reason given.- Chances of winning vary widely based on the number of entries received.- Prize is as stated. No substitutions or exchanges.

- Contest host/organizer is not responsible to misrepresented/mis-typed email addresses, spam filters, mailer demons, and other internet wackiness that may crop up at the time of winner notification.