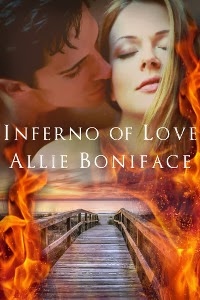 Welcome to my stop on the IMR Tours Allie Boniface Inferno of Love Cover Reveal & Giveaway!!!!  What a great looking cover.


Blurb:
What happens when your soul mate returns after twelve long years – and has no idea who you are?

Aubrey Anderson is a pediatric occupational therapist who’s spent the last twelve years rebuilding her life after a car accident killed her boyfriend and crushed her legs. A series of strokes on the way to the hospital left her with no memory of either the accident or the weeks leading up to it, so when she starts having nightmares she can’t explain, she decides to return to the scene to see if she can piece together her past.

Finn Cavallo is Lindsey Point’s resident playboy, owner of a popular bar, and hero of the Cove Fire, when he pulled seven people from a burning building twelve years earlier. But his flirtatious personality hides the heart of a man who lost his soul mate the night of the fire. When Aubrey walks into his bar with no memory of who he is or what they had, he’s stunned – and it takes everything he has not to tell her about the summer they spent falling in love.

It’s only a matter of time before bar conversation turns to passion on the beach and more. But when a series of events raises suspicion that Finn himself might have started the Cove Fire, Aubrey is forced to do whatever she can to discover the truth about both their pasts, including going back to the spot where it all began… 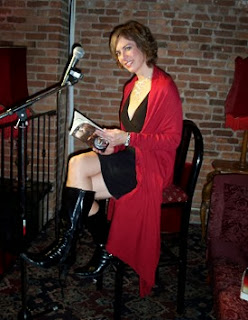 Allie Boniface was born and raised in a tiny community in upstate New York, which probably explains her fascination with the magic of small town life. She currently teaches high school English in the lower Hudson Valley, where she lives with her husband and two furry felines. She is the author of six contemporary romance novels; Inferno of Love is the second in her Hometown Heroes series. Allie loves chatting with other authors and readers and can be found around the Web (visit her on Facebook or Twitter, and stop by her blog to check out the latest news). She loves attending writers' conferences, giving workshops, swapping stories, and generally talking about romance. Allie loves stories set in small towns and is a firm believer in the power of love and the emotions that connect us all!

The Giveaway:
Reader's choice of either the ebook or print version of Beacon of Love (the first book in this Hometown Heroes series!) 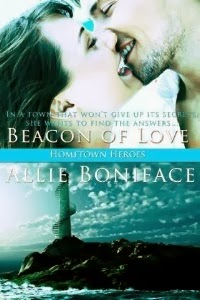 Welcome to Lindsey Point, Connecticut: suspicious of outsiders, loyal to tradition, and absolutely devoted to its local legends.

Enter Sophie Smithwaite, travel show host, in town to film an episode about Lindsey Point’s haunted lighthouse. But digging into the story of a tragic murder-suicide and love gone wrong reveals startling connections to Sophie’s own past. When a gorgeous local handyman fills in behind the camera, Sophie’s life gets complicated by more than just her family history.

Part-time paramedic, handyman, seasonal Santa... Lucas Oakes does it all--except get attached. He’s still reeling from the death of his best friend ten years ago and the more recent infidelity of his ex-fiancee. Yet despite Sophie’s big-city nosiness and her insistence on chasing long-dead ghosts, he’s drawn to her.

But mixing with an outsider means questioning people and traditions Lucas has always defended. When a series of attacks seem to be connected to Sophie’s investigation, both Sophie and Lucas must decide if they are willing to risk everything to uncover the town’s secrets...and their own.

CONTENT WARNING: Contains one barb-slinging travel show host, one hunky handyman who knows exactly how to use his tools, and a small town brimming with secrets ...


Barnes & Noble
Goodreads
Posted by Unknown at 12:00 AM