Today at For Whom the Books Toll, I'm hosting Natalie J. Damschroder A Kiss of Revenge Buy The Book Tour Author Interview and Giveaway. It's easy to enter, just fill out the rafflecopter. Good luck everyone.
Welcome Natalie and thanks for being here today.

Where do you find writing inspiration?
Everywhere! There are a few very fruitful areas, though:

What’s the best way to get over writer’s block?
For me, it’s a combination of two things. One is letting the book go for a little while. The idea is that it’s percolating in my subconscious while I’m working on other things (or not working at all). The other is forcing myself to write even if nothing’s coming, or if it’s slow and difficult, or if it’s just really bad. These two things can be applied in either order and rarely seem to work by themselves. Eventually, I break through with the idea I need to fix or move the story, and I can get back into a natural flow.

Can you tell us about your current book, A Kiss of Revenge?
After being widowed three times, a young bakery owner wants to stop changing herself to be worthy of others’ love. But she can’t be truly free to live her own life until she wreaks vengeance on the man who destroyed it. If she succeeds, though, she could lose the only man who can really love her for who she is, and that she can love in return.

What made you write ‘this’ story?
Originally, I was targeting Silhouette Bombshell, which seemed tailor-made for me. I was discovering my niche in romantic adventure and dallying with paranormal elements. I’d submitted two books that didn’t quite meet their needs, and I decided to just go crazy with a story, breaking all the rules and pushing the limits of my imagination. Well, that didn’t work, either. LOL But I revised the book several times (selling it twice to publishers who folded before publication) and with the help of my editor at Entangled, balanced the romance and the suspense in what I hope is a compelling story.

What can readers expect next from you?
On December 31, my Goddesses Rising trilogy concludes with Sunroper, in print and e-book from Entangled Select. Then in February my second Entangled Ignite comes out. Hearts Under Siege is both a best-friends-to-lovers and a spy story, and was one of my favorites to write.

If you could bring one of your characters to life, which one would it be and why?
Oh, that’s so HARD. I don’t want to choose between Nick Jarrett, the hero of Under the Moon, and Sam Remington, from Heavy Metal. Nick is fiercely loyal and protective, snarky to hide a very soft heart. But I think I’d have to go with Sam, who is slightly more my type: intellectual and nurturing, albeit perfectly capable of kicking ass if need be. :)

If you could travel in a time machine, would go back to the past or to the future?
Definitely the future. We know the past already. I understand there is always more to explore, but I love technology and how it shapes people and relationships, and I’d love to see what comes next, and after that, and wayyyy after that.

What is your greatest temptation?
My book-buying wishlist. Any time I have a little disposable income, that’s where I go. Doesn’t matter about the 30-odd books on my bookshelf and the equal number on my Kindle. There are always more I HAVE TO HAVE.

What is your greatest weakness?
Being a control-freak know-it-all. Oh, wait. That’s my biggest *flaw*, which doesn’t necessarily mean weakness. Let me see…

Pringles. Pringles are my greatest weakness.

Other than writing, what are some of your passions in life?
Football is my biggest passion. I’m a huge New England Patriots fan, and I have a day job primarily to pay for the NFL Sunday Ticket. :)

If you were deserted on an island, who or what would you have to have?
Books. That’s pretty much it, as long as I had the things necessary for survival (food, water, sunscreen LOL).

If you could have any superpower what would you choose?
Flying! I used to have recurring dreams about being able to fly if I jumped out a second-floor window. If the window wasn’t high enough, I couldn’t fly. It’s been years since I’ve dreamed of flying, and that’s a little sad.

How about a few fun questions?

Coffee or Tea?
Café mocha in the morning, tea the rest of the day

Pepsi or Coke?
COKE. I’ll order water before I drink a Pepsi.

Salty or Sweet?
Preferably both at the same time.

Mountains or beach?
Beach gets a slight edge, but I find peace in both.

Favorite ice cream?
Hood’s Chocolate Macadamia Nut Crunch, but I can’t get that here so Jeni’s Brown Butter Almond Brittle except that’s too expensive so Ben & Jerry’s Everything But The…

Casual or dress up?
Casual.

Early bird or night owl?
Night owl by choice, early bird by necessity, which means lately it’s both every day, and that’s killing me. LOL

Thank you so much for having me! This interview was great fun!

I'd like to thank you again, Natalie for being here today. I really enjoyed our interview. 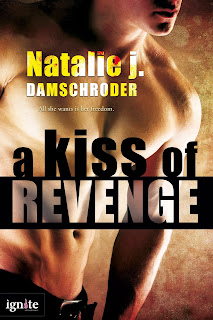 Blurb:
Marriage is completely over-rated, especially after Reese Templeton’s quadratic failure. She’d rather settle down to a solitary life of owning a bakery—after she tracks down the man responsible for her husband’s death and making her a human Taser full of enough electricity to short out a city block or send a man into cardiac arrest with just one kiss.

But alluring P.I. Griffin Chase is stirring up those feelings of need again. Only this time, her desire to be in his arms has nothing to do with her fear of loneliness and everything to do with the current charging through her body every time he looks at her…touches her.

Griffin hasn’t remained at Reese’s side just because of the spark that has nothing to do with her super-human talents. He’s willing to compromise his rock-solid principles so she can find closure. But before they can move on, he must help her catch her late husband’s killer, staying on track before she has a chance to exact her revenge. Because leading Reese to jail in handcuffs may just break his heart for the final time.

“I had meetings at the office in Boston and was headed back to DC. I thought I’d stop in and see how you’re doing.”

She grabbed a towel to wipe off her ice-cream-sticky hands. “Crestview is not on the way to DC from Boston.”

He shrugged and pointed at the butter croissants in the bakery display case. “Close enough.”

With a pair of tongs, she selected the biggest croissant and put it on a plate. “Coffee?”

“Of course.” He leaned against the counter and folded his arms. “You have anything for me to check out?”

She shook her head. “Not at the moment.”

“What about him?” He jerked his head toward the sidewalk outside, where Andrew Laine stood talking to the couple who owned the hardware store. “He giving you any trouble?”

“Not anymore. I told him I was married.”

She cursed herself as soon as the words were out of her mouth. Griff’s gray-blue eyes darkened, his rock-solid chin tightening. He’d obviously meant “trouble” because of Reese breaking the law, not because the chief of police had asked her out.

“No!” She grabbed the towel again and swept it over the few crumbs and coffee drips on the counter, scrubbing vigorously at one dried spot. “I didn’t want to shove him too far away, that’s all. As long as he had an interest, I could keep track of what he knew.” Even if it kept her on edge and fried her equipment. “Anyway, he knows now. It’s fine. You don’t have to worry.”

That wasn’t strictly true. Griff was co-owner of a multi-city private detective firm. He ran Chase Investigations in Washington, DC, where Reese had lived before the plane crash. Reese had hired him to help her track down clues about whoever had tried to kill her. But they’d become friends. He’d helped her through physical therapy, been a sounding board while she dealt with her new reality, and was the only person on earth who knew what that lightning strike had done to her body.

“I’m paying you to do research,” she reminded him. “You choose to worry.”

He grinned and shook back his shaggy dark-blond hair. “You make it hard not to.”

Another group came in, and he retreated to a table with his breakfast. Reese saw Kimmie eyeing him, and the young woman flushed at his greeting. Reese couldn’t blame her. He had the classic “hunk” build, with a broad chest, narrow waist, and shoulders shown off by a tight gray T-shirt. His gray-blue eyes were nothing special at first glance, but they sparkled at everyone and made his charming smile even brighter. No doubt that smile was what pinned Kimmie in place now, wearing a slightly stunned expression.

Reese wasn’t immune, but her friendship with Griff had become one of the most important things in her life. It was something she’d never had before, and she was going to treasure it as long as it lasted. 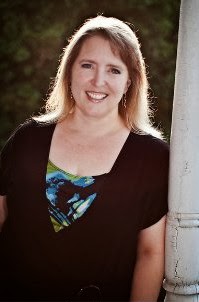 Natalie J. Damschroder is an award-winning author of contemporary and paranormal romance—Love with a Shot of Adrenaline. She sold her first book in 1999, and 2014 will see the publication of her 15th novel. She grew up in Massachusetts and loves the New England Patriots more than anything. (Except her family. And writing and reading. And popcorn.) When she’s not writing, revising, proofreading, or promoting her work, she does freelance editing and works part time as a chiropractic assistant. She and her husband have two daughters she’s dubbed “the anti-teenagers,” one of whom is also a novelist. (The other one prefers math. Smart kid. Practical.) You can learn more about her and her books at www.nataliedamschroder.com.

The Giveaway:
iFrogz GoLite – 2600 mAh Battery and Flashlight
Winner can choose the color. Subject to availability; comparable substitution to be made if necessary. Shipping in U.S. only. International entries acceptable; non-U.S. winner will receive alternate prize, to be discussed). 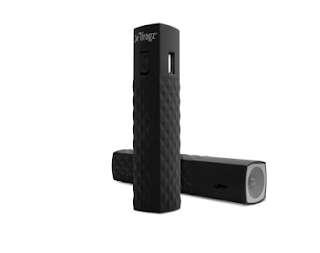