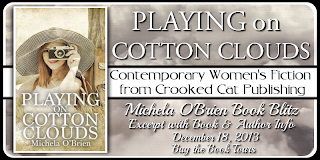 Welcome to my stop on the BTB Michela O'Brien Playing on Cotton Clouds Book Blitz Tour. Sit back, grab something to drink and relax and stay awhile. 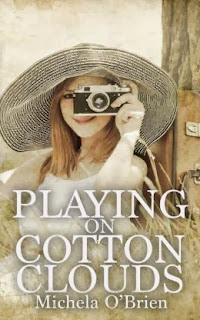 Blurb:
When arty Livy falls for her sister’s boyfriend, she knows her dreams are unlikely to come true… Sensitive Seth thinks he has hit the jackpot when the girl of his dreams finally looks his way… While laidback Aidan is every girl’s hero.

Fast forward twenty-five years as carefree youth turns into adulthood responsibilities, relationships begin and end, music and fashion change, and life moves on with its successes, failures and heartaches. As the friends grow up, they discover life rarely turns out the way you imagined it at fifteen.

The rites of passage through years are eerily familiar to every 1980s teenager in this moving, heartfelt novel.

Livy’s words died on her lips, as she repressed the urge of commenting she had been asking herself how long it would be before[Seth] enquired about Tara. She studied his expression closely, looking for clues on his feelings, but he remained impassable.

“She’s very well, thank you.” She hesitated before casually dropping the grenade. “Perhaps I shouldn’t say it, as official invitations have not been sent out yet, but she’s finally getting married next spring, after all the delays due to James’s mum’s bad health.”

“Is she?” Seth removed the cigarette from his mouth and Livy wondered if the news had detonated at all. He seemed unaffected by any explosion. “Nightmare for you.” He joked. “You’ll have James Douglas-Smith for brother-in-law.”

“Assistant to our local MP, for the time being, but I’d give him a couple of years to replace him.”

“That’s a scary thought. I definitely need a smoke now.”

Seth let his gaze wander around the room, as if absorbing the last few details before walking out of the exhibition for good, and Livy couldn’t help noticing a familiar shadow in his eyes. She had seen it before. It was there the day they had met again at the bridge, four years before, after she had heard about his illness. She had found him pale and thin, but in better spirit that she had imagined, as he did his best to rebuild his life. It was there the day they had travelled to London together, sharing a train journey as she returned to Goldsmiths for her final year and he moved on to his new job. And it was there at Tara’s twenty-first birthday party, when Livy had dried his tears and they had ended up spending the night together.

As she took in the sight of him absentmindedly fiddling with the cigarette, the memory of that night played vivid and present in front of her and a sudden rush of nostalgia engulfed her, filling her mind with what ifs. 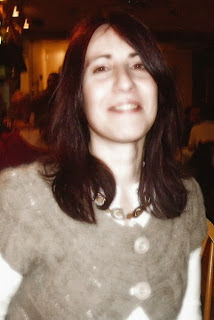 Michela O’Brien was born in Milan, Italy, in… well, let’s say some time in the last third of the 20th century. In Milan she grew up, studied, worked as a teacher, made friends and wrote, commending thoughts to page, imagining plots and characters, recording events in her life, noting observations about the world: stories, diaries, letters… In an era before personal computers, internet, blogs and social networks, it was pen and paper and she still carries a notebook and a pencil with her to sketch ideas on the spot.

She moved to England in 1994 and for a while she focused her attention on her new family. Writing was sidelined, until, about ten years ago, she went back to her love for words and wrote a novel, published in Italy, and a series of short stories, all in her native language. She then started writing in English and worked on short stories and two novels, Playing on Cotton Clouds and A Summer of Love, both published by Crooked Cat Publishing. She has just completed her third novel.