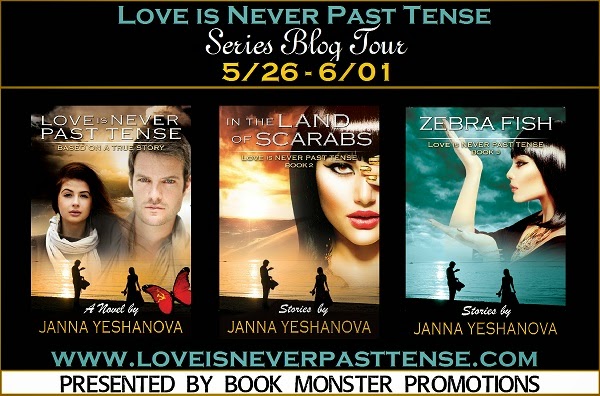 Welcome to my stop on Janna Yeshanova's Love Is Never Past Tense Series Tour presented by Book Monster Promotions. 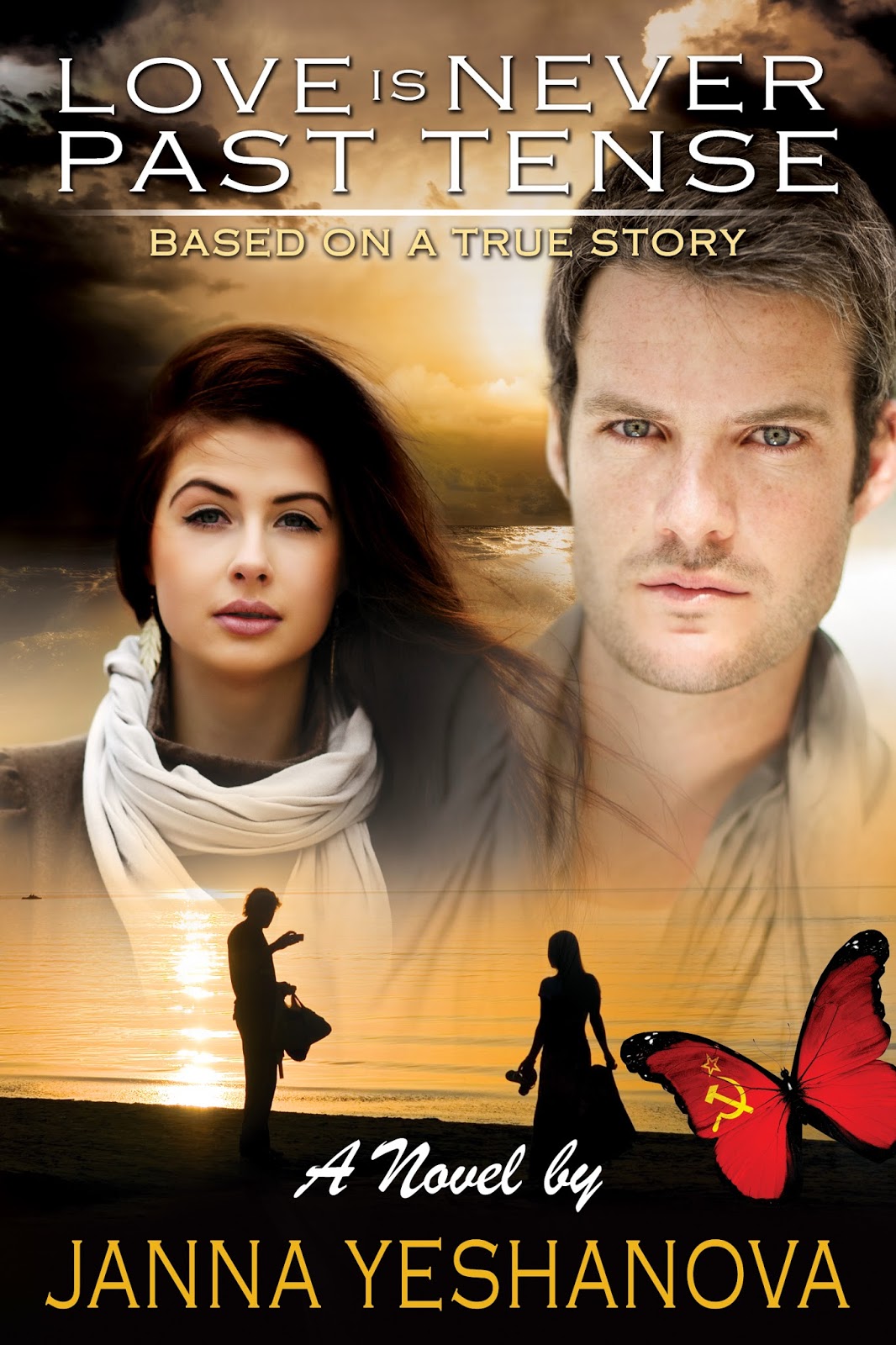 A whirlwind romance on a romantic Black Sea beach turns into a quick marriage for Serge and Janna, only to have family, fate and foolishness tear them apart. As the cold war grinds to a halt, the politics of late Soviet Russia separates the lovers on different continents. Never quite coming together, never quite letting go, their lives overlap and entwine over the years…

“Can the power of love stand up to time, politics and distance? Two young lovers face turmoil, separation and the fall of their homeland. This intriguing and often painful love story spans for decades of life-altering years, life-altering events, but proves that true love will endure as long as the human heart beats.” - Amazon top 1000 reviewer

“The portrayal of Communist and post-1991 Russia is brilliantly done and made the story so much more than 'just' a romance.” - Amazon top 500 reviewer, Christoph Fischer
Beneath the adventure and romance is a deeper story of achieving dreams regardless of obstacles. Janna Yeshanova brings forth her personal account of courage in the face of impossible odds, her indomitable spirit, and a heart of gold that held onto a lost love for decades.

“This very modern love story, lets you feel the sorrow, fear and joy of a couple coping with events that reshaped the world. A great, dramatic romance in classic Russian style.” - Amazon reviewer
Anyone who’s ever pondered the eternal question, “What makes life worth living?” can find the answer within the international romantic saga of LOVE IS NEVER PAST TENSE…

Paperback: Love Is Never Past Tense ...

Excerpt:
The sun was shining with the full force of its rays. The beach resembled a bee hive. The warm, murky sea was lapping its waters against the shore. The heat and humidity weighed down upon them. Serge lay flat on the towel. He slowly squeezed the sand in his hands and let it trickle in streams through his fist. She lay next to him, her gaze penetrating through the crowd of people into a place far off in the distance. Now and then, she would bring her cigarette to her lips and release a stream of smoke. Her hip pressed against his leg, and the spot of contact became moist. He sensed her body and wanted the moment to last for eternity. From the side, he could only see her profile. Barely turning his head, he could make out her beautiful nose, her full, extended lips, and her hair, which barely had a style and obviously knew nothing except a comb as it hung in charming disarray around her face. Round sunglasses hid her eyes.
Her long body tranquilly reposed on the towel, as if there was no heat, no people, not even him. At some point, he thought he was wasting his time. She was just toying with him. Next, she would say, “Bye, bye. Thanks for relieving me of my solitude.” Or perhaps something even more ridiculous. She would take her things and leave, saying she had to meet up with her friends, or that she was getting a headache, or that she had PMS… Shouldn’t he stay one step ahead of her and get up and leave? What was actually holding him here? Absolutely nothing. In fact, all he needed was a little vacation fling. This was what he needed, having been imprisoned on Oil Rocks in the constant company of guys and the Azerbaijanis, who barely spoke a lick of Russian. The only thing that gave him consolation was their general good nature and their ability to laugh at just about anything.
But it was time for him to get away from everything. He’d had enough of those guys. Just over twenty days were left until the beginning of the academic year. So, why waste time? Gosh, around were multitudes of charming and simple-minded girls swarming about like small fish pecking at the guys. He, for all intents and purposes, was not exactly a monster. In his pocket he had a bunch of ten-ruble bills, earned by his sledgehammer on Oil Rocks. He’d wander along the beach, take a seat somewhere, or strike up a conversation, and perhaps ask a girl out for a night of dancing—and he could finally put an end to wracking his brains all the time about what to do or say. But this one lying next to him, torturing him, was not such a simple creature. She was like a cat—independent. She couldn’t care less about the young man fidgeting next to her. Seemingly accessible while in the sea, here she would keep her distance and then disappear in whatever fashion she deemed appropriate. What business should she have with a schoolboy who was oozing sexual desire?
Her hip was burning him. Some invisible little spiders quickly entwined them in a closely woven web. Young women, laying down or walking around, suddenly grew distant, and became minute and uninteresting. Next to him, there remained only her body—hot and powerful. There must have been a magnet setting at her core. It was buried deep, but revealed itself to Serge in a miraculous way… Serge knew he was not going anywhere.
Then he rented a boat, and he skillfully navigated to the shore. She stood in the water up to her knees. She was holding her velvet flats and beach bag in her hands. Bathers entering and exiting the water turned to look at her. She just couldn’t help drawing attention to herself. Her bathing suit was very daring, and her breasts clearly laughed at her vain attempt to cover them. It seemed that in due time the pitiful fabric wouldn’t be able to hold out and would burst into shreds, yet it held on with its very last threads.
The girl, not even considering the possibility of her straps giving out, effortlessly situated herself on the stern as Serge took up the oars… 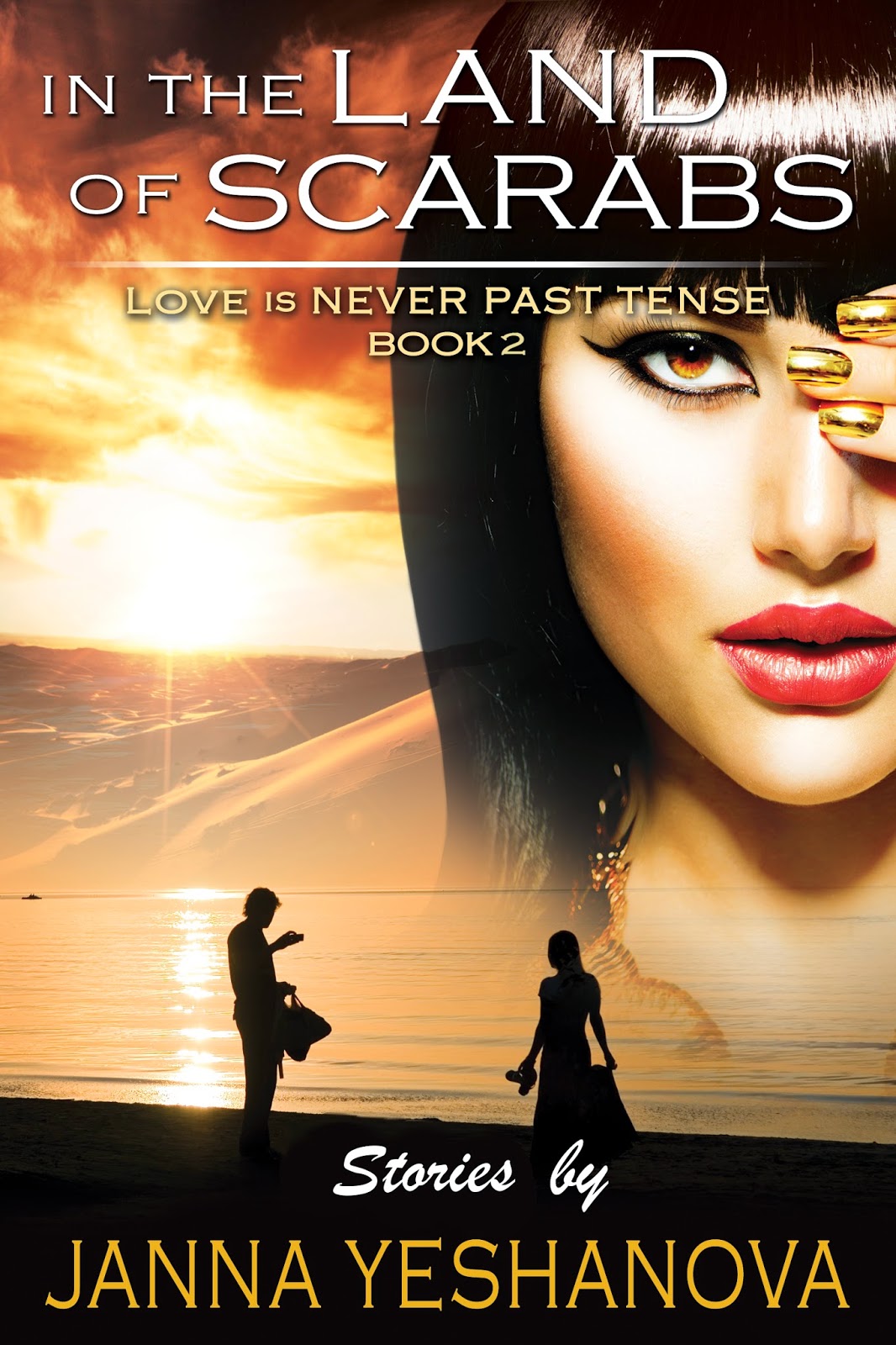 Title: In The Land of Scarabs
Author: Janna Yeshanova
Series: Love Is Never Past Tense #2
For Release May 26th 2014

Blurb:
*A Contemporary Romantic Saga, two stories, the second installment in the Love Is Never Past Tense Series*
Newly reunited lovers Janna and Serge thought the world had given them another chance at happiness. After years of separation following a heartbreaking divorce and harrowing escape from post-cold-war Russia, the couple had reconnected through emails, and finally took the leap to see each other in person.

In The Net of Cupid
Their reignited spark burns ever brighter as they enjoy an idyllic beachside vacation together in North Carolina. Once again life teaches these lovers another surprising, scary lesson. On the coast of an ocean for the first time in his life, Serge rushes into cold waves and mortal danger. He abandons Janna on the shore, leaving behind their plans for a future together. Janna is helpless watching Serge fight a cruel battle with the elements, struggling to make his way back to shore.

In The Land of Scarabs
The romantic saga continues as they travel to Egypt for new experiences. Through an impromptu arrest by customs officials, they emerge to a sun-kissed sand-dune paradise. Egypt is everything they hoped it would be and more. On a desert trek with the Bedouins they find a guide, an old friend of Serge’s from Russia.

Experience this poignant tale of a love that spans decades and continents, as this amazing couple travels the world, discovering both their past and their future together.
*These stories are unconventional women’s fiction, told in the uniquely Russian voice of Janna Yeshanova. Though she was forced to flee her beloved homeland, leaving a piece of her heart behind, she will always and forever be Russian.*

Buy Links:
Amazon: In The Land Of Scarabs: (Contemporary Romance Stories) (Love Is Never Past Tense) 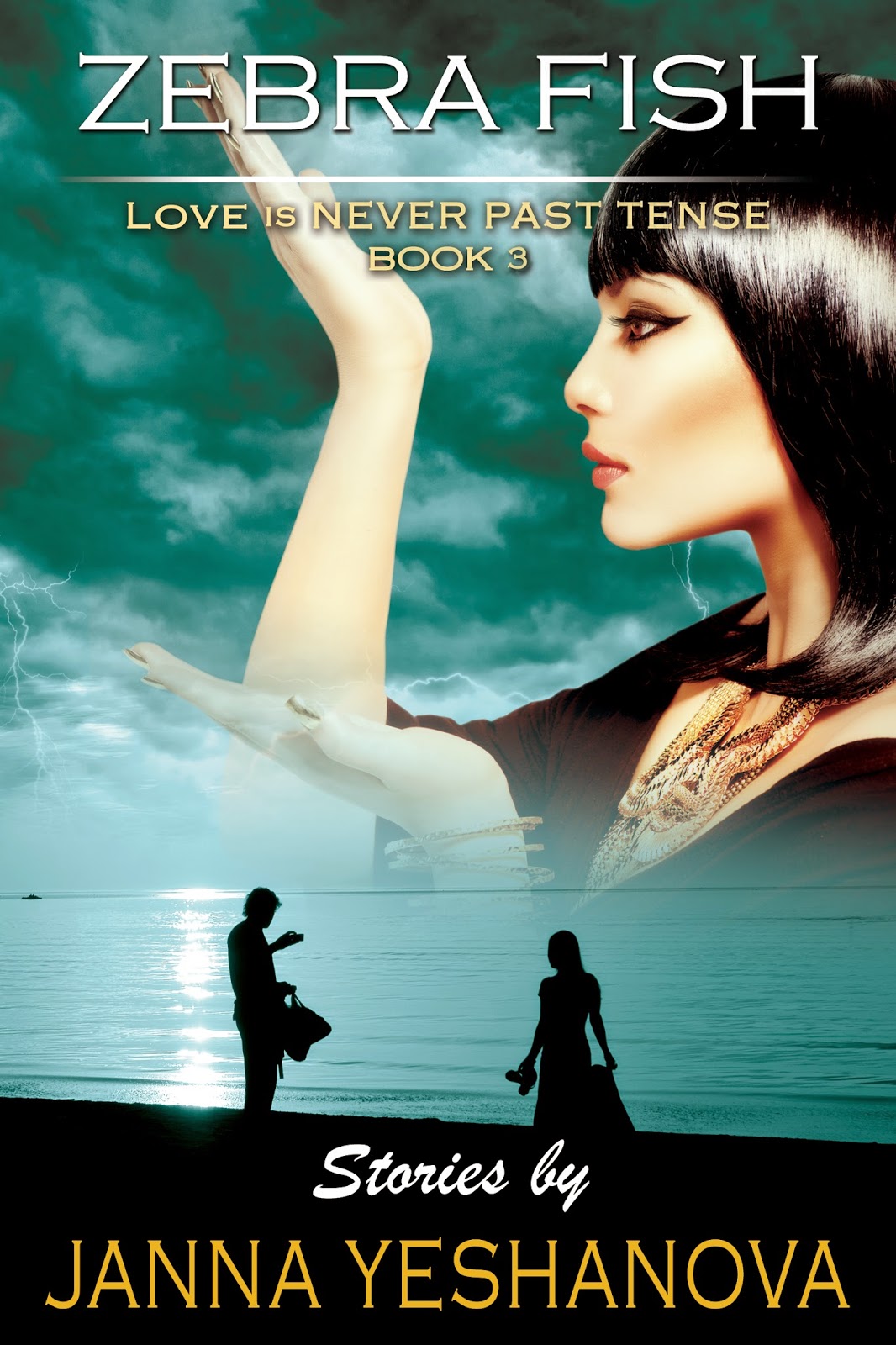 Blurb:
*A Contemporary Romantic Saga, two stories, the third installment in the Love Is Never Past Tense Series*

Newly reunited lovers Janna and Serge thought the world had given them another chance at happiness. After years of separation following a heartbreaking divorce and harrowing escape from post-cold-war Russia, the couple had reconnected through emails, and finally took the leap to see each other in person.

Zebra Fish
Their reignited spark burns ever brighter as they travel to Egypt for new experiences. Having trekked through the desert with Bedouins, they settle on the sunny beaches for relaxation. The beauty of the Egyptian sea seduces the lovers into a scuba diving expedition, but when their boat disappears from the surface, they are stranded on the coral reef with no rescue in sight.

BONUS STORY:  A Favorable Offer
On their return flight from Egypt, Janna watches in horror as Serge is beset by an inexplicable illness. Fighting for his life, deep in delirium, death makes Serge a favorable offer … ‘let go and let death take him.’

Janna can hardly believe Serge’s feverish ramblings as she overhears snatches of their insane conversation.
Experience this poignant tale of a love that spans decades and continents, as this amazing couple travels the world, escaping one peril after another in their desire to forge a new future together.

*These stories are unconventional women’s fiction, told in the uniquely Russian voice of Janna Yeshanova. Though she was forced to flee her beloved homeland, leaving a piece of her heart behind, she will always and forever be Russian.*

Serge felt a light puff of wind. He was afraid that the thing he feared most could happen. The dead calm suggests a fast change in wind, and maybe the beginning of a storm. But the brief gasp of wind disappeared. It became quiet again. The only waves lapped somewhere on the edge of the shallows, which were embroidered with coral and seaweed.
Suddenly, about 30 meters from them something huge jumped out of the water and fell back into the sea with a big noise. Then everything got dead quiet, with only the pounding of their scared hearts blaring like an alarm bell.
“Serge! What was that?”
“I don’t know. A shark, maybe a dolphin… there aren't any whales here.”
“A shark? So now it’s going to devour us?”
“Hardly. It can barely pass into the shallows. It needs open water to attack. And anyway, like I told you, in the winter they travel to the south…”
But again, something jumped out with a hissing and whistling sound accompanied by a bubbling noise and then disappeared into the dark abyss.
“Mother of God!” Janna could only whisper, clutching Serge with such force as if she wished to climb into him and disappear inside. The ominous silence hung above the sea. Numerous stars were suspended in the sky, watching to see what would happen next. 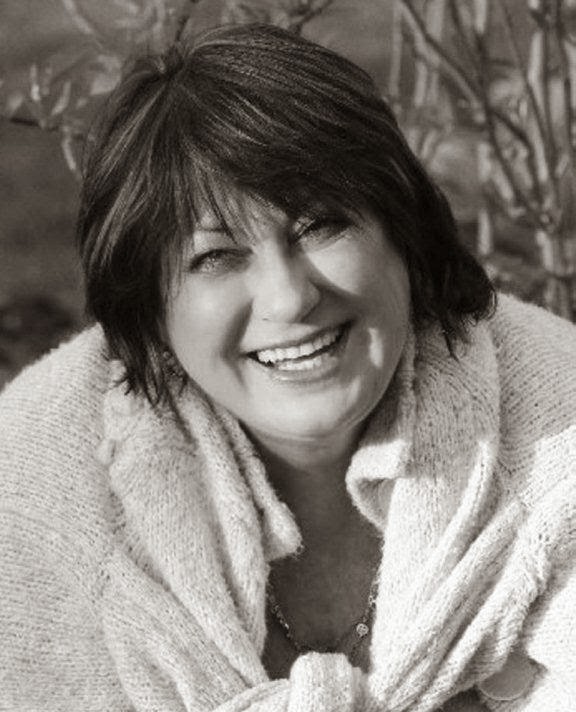 Originally from the former Soviet Union, Janna Yeshanova, M.A., MEd, escaped to the United States when persecution became violent during the crumbling of the Soviet state. Arriving in the United States with her mother and daughter in tow, $126 in her pocket and knowing not a soul, Janna’s talent and experiences have helped her become a high end organizational training and development professional. Her exodus story is included in the book.
Founder and principal of Life-Spark, LLC, Janna is a dynamic and powerful life coach, premier trainer and motivational speaker. She leverages her passion and engaging style to help others to overcome adversity and spark the possibilities of their lives.


TOUR GIVEAWAY DETAILS:
GRAND PRIZE: $25.00 gift card for Amazon
RUNNERS UP:  5 runners up each get a Smashwords coupon for Love Is Never Past Tense in the eBook format of their choice.