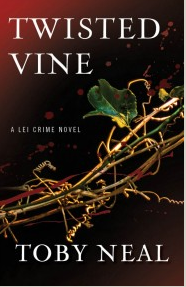 Reviewed for For Whom The Books Toll
5, No Heat

The island of Oahu is skyscrapers and rainforests, beaches and boutiques—but Special Agent Lei Texeira is drawn into a shadow world connected by death and the Internet.

Mysterious suicides draw Lei and her team, including tech specialist Sophie Ang, to hunt a criminal who plays with the thin gray line between right and wrong. Lei stirs up a hornet’s nest on the investigation as her past reaches out in a twisted vine of old loves, new technologies and dark vendettas.
“Toby Neal scores a royal flush in this fifth of an unmissable crime series for mystery fans!” J.C. Martin, author of Oracle

My Review:
Once again, Toby Neal has written a book that grabs the reader and doesn't let go until the end. Even after I finished the story, the characters and plot bounce around in my head.

For the first time, Ms. Neal doesn't give the reader a list of possible suspects in the murders of the terminally ill victims. Kudos for writing a novel with such a unique story line that not only touches the readers but the characters too.

The FBI is called in when a series of suicides turn out to be murders instead. With the help of their information technology specialist, Sophie Ang, they find a common thread between the victims. An online site called DyingFriends. Determined to find who's running the site, Sophie creates a profile and delves into the world of the terminally ill. It was really nice to learn more about what makes Sophie tick. And that despite the fact she is very complicated and keeps mostly to herself, there's more to her.

Lei and her partner Ken Yamado interview several people who are very active on the site. Their stories and pain touch a place in Lei and Ken's hearts. The tears flowed several times while I read about Betty, Robert, Mr. Woo's plight and their decisions to take matters into their own hands.

Ms. Neal has penned another fantastic read that keeps the reader on the edge of their seat until the very end when the mastermind is revealed. So hang on to your hats as you embark on another journey into the life of Lei Texeira and her friends. You're in for a wild ride!