Let’s talk about sex.
Sex, taboo, exciting, intimate reproductive, amazing, boring, are some of the words that come up when people hear mention sex.

Here are some fascinating facts about sex.

10. Sex acts lead to weight loss
The average human loses 26 calories when kissing for a minute. Furthermore, vigorous sex for half an hour burns 150 calories (you can lose three pounds in a year – if you have sex 7 to 8 times a month). Kissing is also very good for your teeth: the extra saliva released during the act helps to keep the mouth clean – reducing the risk of decay.

9. Sex cures headaches
Next time your significant other refuses your advances by claiming to have a headache, remember this fact: the sex act can help to cure a headache. Sex causes the body to release endorphins which naturally reduce the pain of a headache.

8. Sperm is good for the skin
The proteins in sperm have a tightening effect on the skin. When sperm is left to dry, the evaporation of the water in it leaves behind protein which can help to reduce wrinkles. While this may be an excellent anti-aging treatment, the obvious downside is that you have to walk around with sperm on your face.

6. Humans aren’t the only creatures to have sex for fun.
Humans aren’t the only members of the animal kingdom that have sex just for fun. Dolphins and Bonobo chimps have also been observed engaging in sexual activity, when they are not in their natural reproductive cycles. With the exception of a pair of Cohan gorillas observed doing so, bonobos are the only non-human animal to have been observed engaging in all of the following sexual activities: face-to-face genital sex, tongue kissing, and oral sex. When Bonobos come upon a new food source or feeding ground, the increased excitement will usually lead to communal sexual activity, presumably decreasing tension and allowing for peaceful feeding. Interestingly, Bonobo chimps also play and experience joy like humans.

4. Being well hydrated leads to better orgasms.
Because the body is mostly fluid, being hydrated enhances people’s ability to achieve orgasm.

2. Sex and Social Media
Forget post-coital cuddling! According to a poll by consumer electronics site Retrevo.com, 36 percent of people under the age of 35 check their Facebook and Twitter accounts after a roll in the hay. Hopefully, they are not posting any pictures!

1. Who has more sex, men or women?
Think men get laid more than women? Wrong! According to Men’s Fitness, women have sex 17 percent more often than the average guy. Go girls!

And that was definitely interesting. 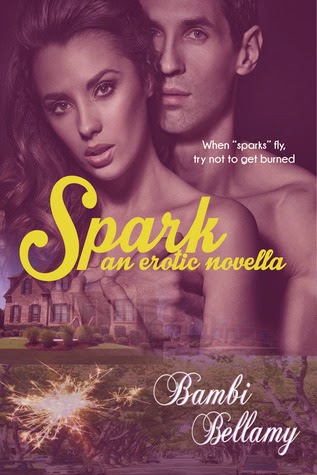 Blurb:
WARNING: Spark contains sexy neighbors who love getting it on… with each other. Graphic language and sex scenes abound. Be advised, this is no sweet romance. Contains hard pumping and ridiculous sexual situations and scenes to make your toes curl. If you can finish Spark without getting hot and bothered, I would check for a pulse. 18+ only!

Newlyweds Violet and Hunter are new in PussyWillow Falls, and they’re loving it.

Everything is beautiful, including the people.

Things heat up FAST when Violet satisfies her husband while they both watch a menage a trois over the fence going on in their neighbors backyard.

But, when the mailman, the paper boy and all the neighbors come calling for a piece of the Violet and Hunter action, was PussyWillow Falls a swinging paradise, or a swinging hell?

Hunter’s fingers worked like an expert, slowly pulling off the wedding dress to reveal a very big surprise just for his eyes.

You would've thought I had given him the best Christmas present in the world, as he looked me over from head to toe, admiring the new lingerie that I had gotten for my wedding night. My bra came off with a flourish, and then he leaned down onto his hands and knees, before driving his teeth into the material of my panties.

Growling, he ripped my panties down my legs, until I was standing in front of him in nothing but my birthday suit. His manly hands moved up my legs, slowly making his way to my most treasured of areas. His hot breath blew across my pussy, causing my clit to wake up from its slumber and come out to see what was going on.

“Oh god, Hunter, I have been anticipating this for as long as we have known each other… mmm.” His tongue made contact with my nether lips, slowly moving back and forth from the bottom to the top, until he was peeling those folds open. “Ohhh.”

I didn't want to miss a single moment of this, so I endeavored to keep my eyes open through the entire thing. Looking up at me, he smiled, as he performed an oral delight on my body that took my breath away. I loved watching him work his tongue into my body.

I reached for his head and guided him between my legs.

Hunter was ravenous for my body and had stirred up a wonderful sensation that was coursing through me within minutes “Ahhh.” Being a conservative type, I thought for sure that I was going to be meek and mild in the bedroom, but it was turning out that he was able to turn me into an animal.

Forcing my hand on top of his short light-brown hair, I pushed his face into my pussy, holding him there as I rammed into his mouth and all over his face. Bucking several times, I finally let go of his head, falling back on the bed with a satisfied expression etched on my face.

“If you think that was something, wait till you see what I have for you for a wedding gift.” Was talking about the profound bulge in his pants?

No, not Hunter. I didn’t think that’s what he was getting at. I really didn't have time to contemplate anything more. I watched him with rapt attention as he dropped his pants and underwear to my gaze.

I gasped, and then reached out with both hands to curl my fingers around his length. Hunter made a sigh of contentment. “I have been waiting forever, Violet, and I don't think I can wait any longer.”

Sticking out my tongue, I lathed the shaft, letting every single inch slide in and out of my mouth effortlessly. Hunter was everything that I wanted, and I wanted to give him something special just for him.

I could feel his wedding night excitement was pushing him over the edge. He was ready to explode in my mouth.  He pushed me away before he went over the edge.

The look on his face told me exactly what he was going to do next, and I giggled like a schoolgirl as he joined me on the bed. Taking my legs in his hands, he licked and sucked on each of my toes, causing my pussy to moisten even more.

His cock was so near my pussy that I was sure he could feel the heat emanating from inside me.

I wanted him. My insides throbbed, wanting to be filled and taken.

I laid flat on my back and stared up at Hunter. His placed his big muscular arms on either side of my head. His hard body glistened in the soft lighting of the room. His face loomed above me, looking masculine and gorgeous, like it was carved as the perfect male specimen out of limestone.

Pressing forward, I felt his elongated member force through my lips, and he continued to move against me until he was balls deep. We were joined as one, and we began to give that mattress a very hard and deep workout, making the bed crash against the wall over and over again.

“My god, Violet, had I known what a wild one you were, we would've been doing this long before now.”

I felt the same way, as I wrapped my legs around his waist to get him in as deep as possible. “Fuck me, Hunter, show you how you feel about me.”

Using his legs for leverage, he was really getting into my body, and our skin was covered in a fine sheen of sex sweat. “I love how your body fits like a glove with mine.”

We were looking at each other, as if our souls were joined for all time, and I began to move my body against him, matching each stroke that came my way. The shaft of his cock was rubbing up against my clit, and before long I was lost in the throes of passion, throwing my hair back and forth across the pillows during my orgasm.

The surprising thing for me was that he didn't join me and continued to hammer his cock deep within my depths. When he pulled out, I could see a combination of his sauce and my juices coating his shaft, before he flipped me over onto my hands and knees and came after me from behind. He put his hands on my shoulders for support, our bodies lost in the moment, and I could feel his release on the horizon.

At the exact same time, my body went out of control, and I began to strangle and milk him of everything that he had. “Ahhh.” Our screams of ecstasy echoed off the walls, and then he slumped forward over my back, licking the back of my neck, and whispering sweet nothings into my ear.

We both collapsed on the bed and stared at the ceiling fan swirling above us. The breeze from the fan made my nipples perk up.

“I bought a house,” he said randomly.