Welcome to my stop on Taryn Elliott's & Cari Quinn's Rocked Book Blitz & Giveaway presented by Xpresso Book Tours. Don't forget to fill out the rafflecopter form for your chance to win!

The Driving Force
So, people are always asking us—how do you write so many books, so fast? Okay, so they ask Cari Quinn a little more than they ask me. LOL But this summer it will be a fitting question for both of us.

Part of it is being current. As Indie authors, we have the capability to jump in, work hard, and get our product out when we want. We aren’t at the mercy of a schedule from a publishing house. This works especially well when writing a series like, Lost in Oblivion. When people are invested in a series they truly hate to wait. We can ramp up our release schedule to suit that. Does that mean we lose quality in our product? Nope. Not with Cari in my corner anyway. She keeps me honest. I get too excited and want to share everything. She drags me back into reality and makes sure whatever we put out is the very best we can be at that time.

Because another part of our driving force is learning from our mistakes. When something doesn’t work, we have the capability of adjusting and correcting, and yet we don’t HAVE to follow the whims of an editor. We are the editor. Even when we use professional editors to clean up our manuscripts we have the final say in what does or doesn’t go in the book. In the end, it’s all up to us whether a story works or not. That’s a heady feeling—terrifying as well, but definitely more on the exciting end. Most of the time. LOL

And as unromantic as it is, the last reason we keep moving so fast in an ever-changing market? Making a living. Cari Quinn is a full time author, and I strive to be one by next year. Being an Indie author actually allows that to happen. At least for us. There’s a helluva lot more pressure, but we both tend to work a little better with that little push. Because at the core of us, we’re also readers and enjoy various forms of entertainment. So when the work gets hard sometimes we just want to go hide with a book and shut out the world. When said world reminds us we have to pay the electric bill, it makes us get back to work.

Thanks so much for having us. We have so many plans for the next few months. Please make sure to check our websites and sign up for our newsletter to stay in the loop about the rest of the men and women of Oblivion, as well as our spin off series that’s developing thanks to such interesting supporting characters.

My question to you…do you like books to link outside the original series? Or do you prefer a finite end and get a fresh roster of characters to love?

Our Process
How the heck do you co-write? Oh, this question makes me squirm. I’m sure some authors have a better answer—at least a more cohesive one. Because Cari and I hash out an idea over the phone usually. For HOURS. We totally get lost in an idea. Then, because we’re both of the seat-of-our-pants mentality, we take off and running inside the story and sometimes…okay, most of the time…we go off plot.

But that works for us! We’re best friends in and out of the realm of writing. We trust each other to be able to adjust and rework an idea to suit. Does Cari want to use a sledgehammer to my skull sometimes? Suuuure. But the joy of being writers that aren’t a slave to the original plot is that we sometimes find something even more exciting on a re-visit to the storyline.

We also check in with each other all the time. And more trust comes into play because when we have those a-ha moments, the other half gets even more excited about a project. Sometimes after a beating must occur. I kid…sort of. ;)

All in all, Cari Quinn and I just love to jump in the sandbox that is our series of characters and play with them. All sorts of hilarious things happen. Especially to Simon Kagan from Oblivion. His story is going to be a hoot to write!

So, to end this…our process is simply to trust in the story and my partner. I know Cari won’t steer me wrong and vice versa.

If you’d like to hear more about the guys from our Lost in Oblivion series, or learn about the spin off series for supporting characters coming this summer…heh. Then visit our websites and sign up for our newsletter. All sorts of fun happens in the newsletter.

Also, the WORD WENCHES on Facebook is a blast. It’s a reader group that Cari and I have cultivated. Actually more like the Wenches took on a life of their own. And man do we have fun in there.

Thanks so much for having us and giving the Big Guy—aka Deacon McCoy—a chance. ROCKED was a labor of love and I think it comes through in our very first road trip with the boys of Oblivion.

My question to leave you…do you like spin-off stories? Or better yet, do you like series at all?

Thanks for sharing a little insight into your writing process Taryn and Cari. 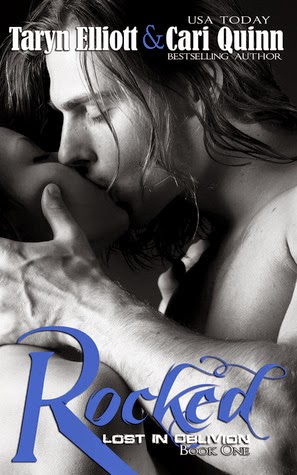 Love definitely wasn’t on the setlist.

Opening for their idols on their first tour, Oblivion is living the dream. Mostly. Frustrated at being shoved out of his mediator role by their new manager, Deacon McCoy loses himself in brutal workouts. He only comes up for air long enough to refuel—and to tease the deliciously cute chef who makes him crave a lot more than what she’s offering on her serving plate.

As the child of roadie parents, Harper Pruitt has heard every pickup line twice. To her, musicians are one step above the scraps on her cutting board. All she wants is to get enough experience to run her own catering company, but Deacon and his bottomless stomach are too tempting to resist. He’s far from the typical rock star and before long, she finds herself experimenting with him, inside and out of the kitchen.

When Harper sees that Deacon’s dream band with his best friends may be turning into a nightmare, she can’t walk away. Deacon’s so much more than just a peacemaker and the man behind the bass. But she has her own dreams to chase…even if she’s starting to think what she’s building with him might be the biggest one of all.

You met Deacon McCoy in SEDUCED, now you can watch just how far a big man can fall.

Deacon rolled closer to Harper, curling his arm around her waist. She nuzzled into his neck. In sleep, his girl was very cuddly. They moved together in the narrow bunk like they’d been doing it for years.

Harper’s phone chirped. The familiar soaring seagull cries and crash of ocean was their morning wake up call. She turned into him, brushing her cheek against his chest with a moan.

“You can always go on my morning run with me.”

She snorted. “I’d rather clean pots after Mitchell’s chili.”

Hooking a thigh over his hips, she maneuvered him over until she was splayed across him. Damn, she had strong thighs. He slid his hand up the smooth, tanned skin, feeling the flex of muscle.

He could wake to that every damn morning of his life.

She leaned over him, her sunny blonde hair curtaining around them as she brushed her lips over his jaw, nipping his chin then swiping over his lower lip with the tip of her tongue.

He could feel the smile before he lost himself inside of it. The kiss was light and sweet and filled with an easiness he’d never thought he would find. Not here, not now when things were still so uncertain with his future.

He knew what he wanted. Knew that this woman was everything he’d ever needed. He banded his arms around her back, drawing her into a deeper kiss. Instead, she pulled away with a teasing flick of tongue and nip of teeth.

She waggled her eyebrows and nuzzled his neck, moving down to his collar bone. Her silky hair slid down his skin in her wake. She shimmied down his chest to his abs and he couldn’t stop the groan.

She tugged at his boxers, freeing his morning hard on with an exaggerated purr. He laughed until she hummed around the tip of his cock and took as much of him as she could.

If you enjoy a little colorful fun please join our Facebook reader group, The Word Wenches. 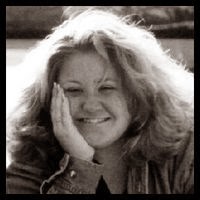 TARYN ELLIOTT comes from the great state of New York—upstate, thank you very much. She’s usually busy making up stories with her best friend until the wee hours of the morning, or fangirling over her favorite TV show. She falls in love with each and every one of her leading men as she writes their book, and there’s always a soundtrack to match.
She loves talking to readers, so if you’d like to reach her, please visit her website: tarynelliott.com and sign up for her newsletter, or drop her a line at: taryn@tarynelliott.com. 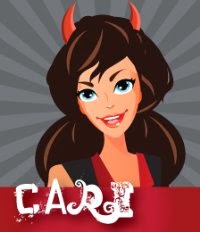 USA TODAY BESTSELLING AUTHOR CARI QUINN saves the world one Photoshop file at a time in her job as a graphic designer. At night, she writes sexy romance, drinks a lot of coffee and plays her music way too loud. When she’s not scribbling furiously, she’s watching men’s college basketball, reading excellent books and causing trouble. Sometimes simultaneously.
Visit Cari at www.cariquinn.com to sign up for her brand new newsletter, or drop her a line at:cariquinnauthor@gmail.com.

Blitz-wide giveaway
Prize (US only): A signed copy of Seduced by Cari Quinn and Taryn Elliott , a $10 iTunes gift card, plus swag

Or you may use this link:
http://www.rafflecopter.com/rafl/share-code/ZDA0MjUxMjM1OGRlZWRmZWM1YmUyMmFkYTM3OWE5OjQxNA==/