Review for The Dom With The Clever Tongue by Sorcha Black, Leia Shaw & Cari Silverwood 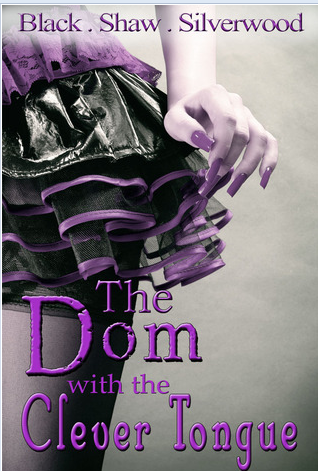 Title: The Dom With the Clever Tongue

Reviewed for For Whom The Books Toll
5, Scorching

Reece and Scarlet have everything a loving couple could want, except a hot kinky sex life. Malachi, an experienced Dom, steps in to help them sort that out. But not only is he a terrible memory from Reece’s past, he’s a smartass and damaged goods, too.

As they all learn to trust each other, Malachi becomes more than just their kink coach. It’s a full-on brat smackdown, and no heart gets out unscathed.

Warning: Contains unrepentant brats, surprise orgasms, a Domme with training wheels, and a Dom whose tongue is registered as a weapon of mass seduction.

Malachi Johansson isn't involved with anyone at the moment and agrees to help out Sabrina's friends. He doesn't know who the women are so when he finds out one of them is Reece he's shocked but willing to try and bury the past.

I'd like to meet Malachi in a dark alley sometime and have my wicked way with him. He's just so delicious. A bad boy image, lots of tattoos and a killer smile.
But don't let that tough exterior fool you. Deep down, he has feelings and is more sensitive than he lets on.

The book is full of sexual tension, ups and downs, twists and turns and is one roller coaster ride of emotions. Just when I thought I knew what was going to happen next, another curve was discovered in the storyline and I turned out to be wrong.

I really enjoyed how the characters learned to trust each other and how well they got along with each other. All the characters are well written and plenty of depth and dimension. I felt like I was part of the book and that the story was unfolding right before my eyes. The Dom with the Clever Tongue has a lot of wit and humor and made me chuckle and laugh. I can't stress strongly enough that this series is fantastic and everyone should read it.

I hope there will be plenty of books in this series because I will never get tired of them. Now, I'm off to be a good girl and read book 2.