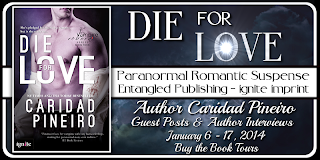 Welcome and thanks for stopping by today for BTBTours Caridad Pineiro's Die For Love Author Spotlight & Giveaway!! Don't forget to visit the stops on the tour and fill out the rafflecopter for your chance to win. 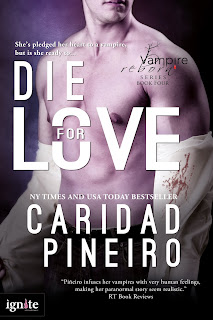 Diana Reye’s pregnancy is draining her of life.  Now vampire Ryder Latimer is faced with the most difficult choice of all.  Turn Diana, or lose her and the baby.  If Ryder chooses to save them, he risks the wrath of the Slayer Council and will be marked for death by their friend Michaela.

Chasing a vampire can be consuming . . .

While acting as an enforcer for the Slayer Council, FBI agent Michaela Ramirez has been searching for the vampire who raped and killed her mother.  Since meeting FBI Director Jesus Hernandez, however, Michaela is losing a bit of her edge.  She can’t stop imagining the possibility of a life full of happiness and passion with her handsome boss by her side…and in her bed.

Living without love isn’t an option . . .

But soon trouble comes calling as the vampire she hunts makes Michaela his prey. Now, as she and Ryder both make the difficult decision to break all the rules for love, Michaela finds herself in a battle not only for her own life, but for her friends’ lives as well.

The rich scent of the woman’s blood peppered the night air.

The woman who should be long dead.

Connall Burk had grown up on the Jersey Shore centuries ago, and now as an immortal vampire, he came back every summer to relive the many pleasant nights he’d experienced on the oceanfront. Good thing. Apparently he had loose ends to tie up.

He hadn’t seen the woman in the yellow sundress for nearly eight years. Not since the warm summer night he had wooed her at a bar just a few towns over. He remembered her vividly; her blue eyes were amazing, mesmerizing. They’d gone for a walk that night, and after finding a quiet place under the boardwalk, he’d led her deep beneath the fragrant, freshly laid planks of wood.

And then he had raped her and drained her dry of blood, relishing the intoxicating sight of life extinguishing in those blue, blue eyes.

Or at least he had thought it had. Now that he knew better, he intended to fix his mistake.

But not before having a little fun.

Moments ago when he spotted her, he’d gone after her, but the bouncer at the bar had stepped between them, keeping him from seizing her and hauling her off.

She’d run, of course. But he had scratched her arm as he’d grabbed for her, and she was bleeding. Child’s play for a vampire to follow.

With mounting anticipation, he tracked the scent of her blood and the crackle and snap of the sharp marsh grasses as she fled down the dunes. It had been a dry summer along the Shore and the noise was enough to wake the dead. But they were alone on the beachfront.

Or were they…? She crested a dune and the moonlight shone down, highlighting her bright yellow sundress. Beside her, closer to the ground, there was a brief movement of a shadow. But it disappeared just as quickly.

Her gaze connected with his, filled with fear. He smiled. The only thing more intoxicating than the fragrance of her blood was the smell of her terror.

She turned and ran again. Not that she would escape him.

Eager for a taste of her, he hurtled toward her at vamp speed, but she surprised him, whirling to hold her ground. She held her head high in what she must have thought was a courageous tilt, but it was merely reckless. Did she not remember who he was? What he was? Blood flowed freely from the cut on her arm, liquid obsidian in the moonlight, making him salivate. So tempting…

“You didn’t think you could escape me again, did you?” Connall said, sauntering to stand before her.

She looked past him, but when he went to track her gaze, she challenged him. “You will not rape me again. I won’t allow it.”

He stared at her, incredulous and angry. “You won’t allow it?”

He laughed then, and with a quick slash, he raked his razor-like fingernails across her throat, slashing it open.

Blood gushed from the wound and spilled down her throat, staining the bright yellow sundress with streaks of crimson.

She brought a hand to the wound, trying to stop the bleeding, but he yanked it away and laughed even louder. “I’ll rape you as you die. And I’ll rape you afterward, as your body cools. But first—” No sense wasting such delicious fare.

He wrapped his arm around her, holding her body tight to his as he buried his mouth in the slash of her wound and fed greedily. The life force in her blood awakened his baser desires, and he ripped off the top of her sundress.

The blood from her throat dripped down onto her breasts and he licked at them, then bit her hard. She moaned in pain and tried to push him away, but by now her actions were half-hearted. Half-dead.

His head spun, high from the feeding, his bloodlust sated for now. With one last, powerful thrust he spilled his seed, then fell away from her onto his back with a groan of contentment.

Another perfect night on the Jersey Shore.

New York Times and USA Today bestselling paranormal and romantic suspense author Caridad Pineiro wrote her first novel in the fifth grade when her teacher assigned a project – to write a book for a class lending library. Bitten by the writing bug, Caridad continued with her passion for the written word and in 1999, Caridad’s first novel was released. Over a decade later, Caridad is the author of more than thirty published novels and novellas. When not writing, Caridad is an attorney, wife and mother to an aspiring writer and fashionista.

Monday, January 13, 2014
For Whom The Books Toll
What Readers Want