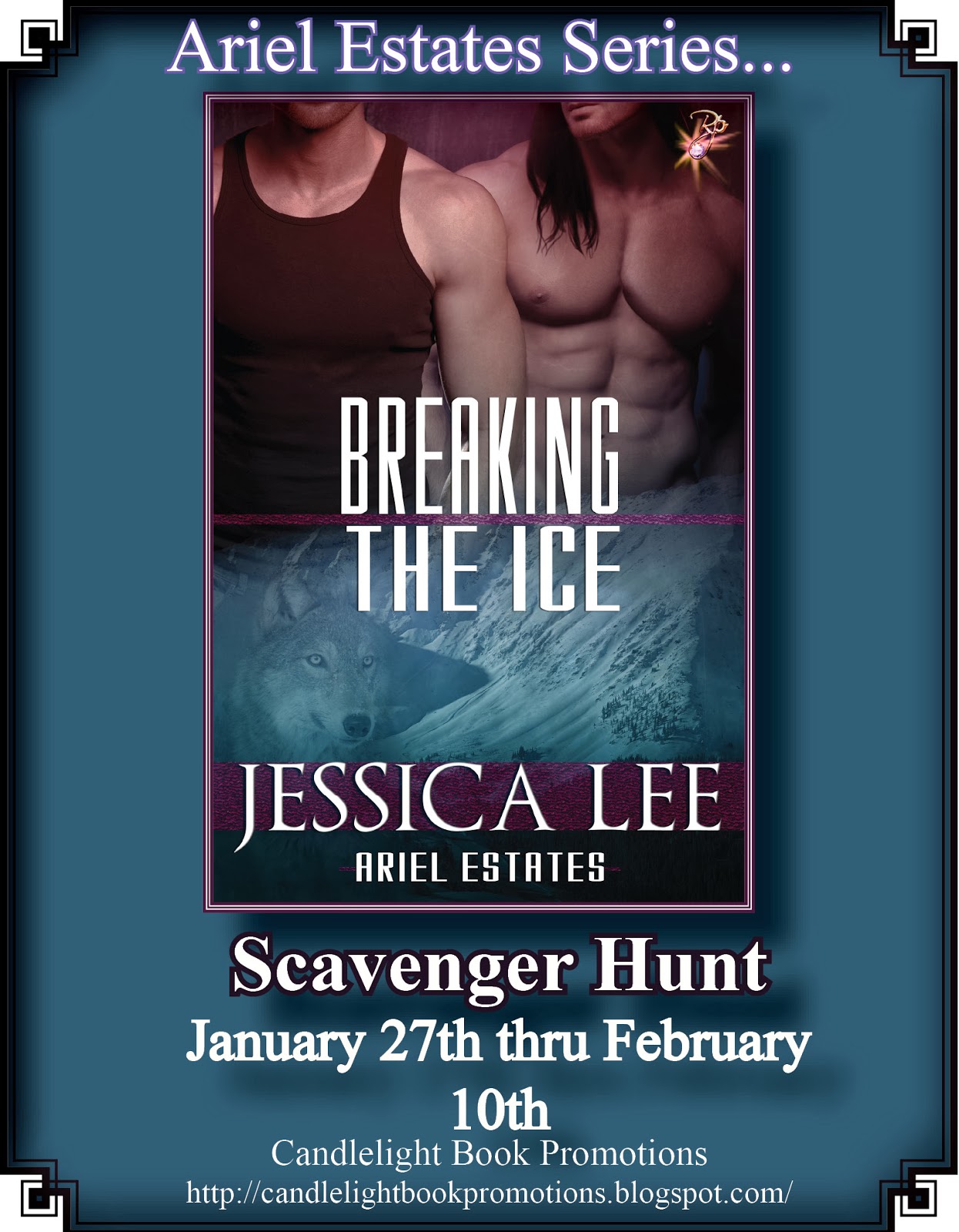 Welcome to my stop on the Candlelight Book Promotions Jessica Lee's Breaking the Ice Scavenger Hunt!

Jessica is interviewing Gideon Haven from her current book, Breaking the Ice.  Thanks for stopping by today Jessica.

There are 10 (ten) stops for this Scavenger Hunt. Each stop contains a letter button. The letters are scattered randomly to the hosts. You will need to collect all 10, unscramble them, and then enter the decoded message in the Rafflecopter for the ‘extra entries’. All 10 letters form a message that is the answer to the following question. Good luck!

Question: What is it that Mikah Malloy desires, but within his soul, believes he doesn’t deserve?

Hi, everyone, Jessica Lee here, author of the Ariel Estates series and its latest

installment, Breaking the Ice. First of all, thanks so much for allowing me to guest post today and introduce you to Gideon Haven. The initial thing that hits me about the wolf shifter, after I’d mentally dragged myself away from the green-eyed sex-on-a-stick creature’s body, was his confidence. It rolled off him in waves. Not in an arrogant way. No. He wasn’t trying to impress. His self-assuredness came as natural to him as breathing.


I didn’t need to ask the question. Because I already knew the answer. Gideon Haven was born to be an alpha.

How about we start with your childhood. What is one of your earliest memories? “Hmm… I believe that would be when my brother, Josh and I were kids, and my mother had taken us outside to play. One of the other boys who’d joined us pushed Josh down. Josh starting crying, and I remember this surge of anger taking me over, and I barreled into the other boy, slamming him onto the ground. Next thing I knew, my father was pulling me off him.” Gideon inhaled deep and shook his head. “I couldn’t have been more than four or five, but the memory is still very clear.” He chuckles. “My temper has always gotten me into trouble. Still does.” What one might call a shy grin turns up the male’s lip. But something tells me there’s nothing innocent about Gideon Haven.

Are you involved in a romance? “Not at the moment.” He shrugs. “I just got out of a long term relationship. I’m thinking it’s probably not a good time to get involved with anyone right now.”

Any reason why you’d say that? “Uhm… Let’s just say I’m looking for a fresh start.”
Okay. That was very mysterious.

Favorite indulgence? “Are we talking food, sex, or both?” He winks.

Whatever you’re willing to share. “Well, if you’re talking food that would be a dark chocolate mousse. Decadent. Delicious.
Sex? Now that info would be between me and my partner. But I can tell you perhaps some of that mousse might make an appearance before, and perhaps during our time together.”
I squirm as heat rises up my neck and into my cheeks. Clearing my throat, I continue on.

What is the one thing you want the most in the whole world? A long sigh escapes him as he appears to organize his thoughts before speaking. “To live my life not defined by what others expect I should do or who I should be. I want to see and experience more of what the world has to offer beyond the ice around me.”
Is leaving your pack a problem? Do you have an enemies or reasons why you shouldn’t do just that, explore the world?
Gideon leans forward, resting his forearms on his thighs. Technically, I’m next in line to succeed my father as alpha. Leaving the pack…” He leans back and crosses his arms. “It’s not what is expected of me. But I truly believe my twin brother will make a better alpha for my people. He’s a peacemaker. I’m a trouble maker,” Gideon rumbles and narrows his gaze on me before cracking a smile. “As for your question about an enemy or threat holding me back…” He nods. “Unfortunately, there has been an incident—a murder—that I need to help my father investigate before I can get out of here.” His gaze locks on mine. “There’s no way I would ever leave before this bastard caught, and I know my people are safe.” Gideon stands. “Now if you’ll excuse, there are some things I need to take care of.”
I’m dismissed.


And that was it for my interview with Gideon Haven. Wow. The male was intense, but at the same time, magnetic. I would have loved to learn more about him, delved deeper into what made him tick. Good news, though, you can find out more about Gideon and the Haven pack in Breaking the Ice! 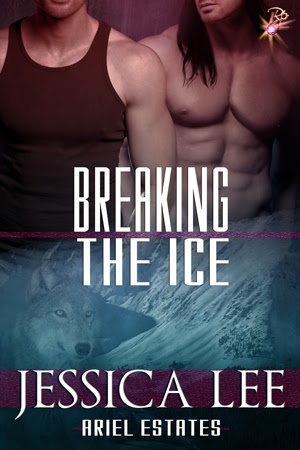 Blurb:
The tundra isn’t the only thing that’s frozen solid.

Being the last male standing isn’t always what it’s cracked up to be. Mikah Malloy is living proof. His mother and father were both killed during their individual attempts to assassinate the pride leader of Ariel Estates, Silas Murdoch. Now after the dust has settled on his bloodstained family’s name, Mikah must face life alone among his fellow lion shifters. But Silas and his mate, Theo, have decided a vacation in Alaska is just what the doctor ordered to help Mikah come to terms with his grief and his plans for the future. The only snag with their plan is trouble always has a way of finding Mikah, no matter where he runs.

Gideon Haven, eldest son of the Haven pack's alpha, would give his soul for a way off the ice. But when a hunter is out to eradicate his pack one by one, skinning them alive for their wolf pelts, Gideon can’t just walk away.

The predators have now become the prey, but they're determined to hunt down the poacher out to slaughter Theo and Gideon's pack. As for Mikah, he’s more than ready for the job. Putting one's life on the line isn’t a hardship when you don’t care whether you live or die. The heat between Gideon and Mikah becomes nearly impossible to resist, yet Mikah is determined the tenacious wolf isn’t about to get close enough to break the ice around his heart.

Author Bio:
Jessica Lee is an EPIC eBook Award winner and international bestselling author of paranormal romance. She lives in the southeastern United States with her husband and son. In her former life, Jessica was a science geek and spent over twenty-five years as a nurse. But after the birth of her son, she left her medical career behind. During that transition, she discovered her passion for writing romance and has never looked back. Jessica Lee is currently published by three houses:
Entangled Publishing, Resplendence Publishing, and Ellora's Cave. In addition, she has several self-published titles available. Jessica is a member of Romance Writers of America and Carolina Romance Writers. 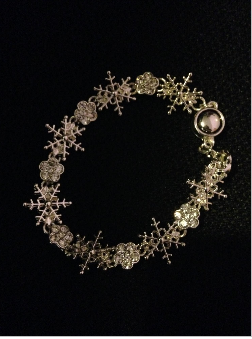 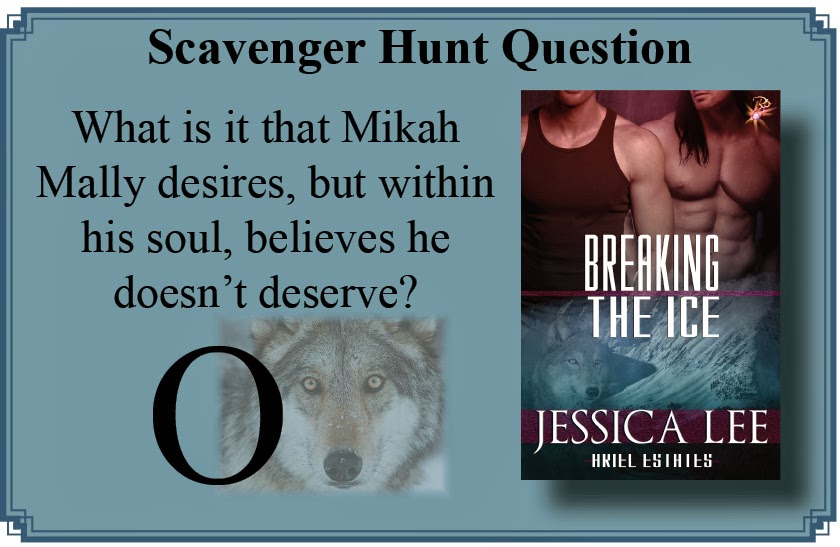 Friday January 31
For Whom The Books Toll

Monday February 10
For the Love of Bookends