Review for Jaguar In The Sun by Anya Richards 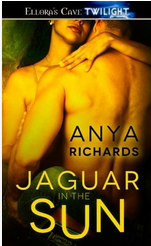 I received a complimentary copy of this book from the publisher in exchange for a fair and honest review. I rated it 4.5 out of 5 stars.

Reviewed for For Whom The Books Toll
4 1/2 stars

Cassandra Solinar has a bucket list and jaguar god Xbal Montegro is on it. About to undergo an essential rite she won’t survive, she wants to wring every ounce of pleasure out of the time left. Including discovering if Xbal’s sex magic technique is as good as rumored.

Cassie can’t tell Xbal the truth about what she’s about to do. It’s illegal, but without her death the entire world will perish. It’s a job she’s been preparing for from birth, but the loss will be greater now. For in Xbal she finds a soul-deep connection she doesn’t want to lose, and the one thing she made a point of not putting on her bucket list—love.

I was quickly drawn into the story on page 1, and found it difficult to put down. Jaguar In The Sun may be a short story, and it moves along at a good pace and it's so easy to like Xbal and Cassie. They have great chemistry that sizzles off the pages. The sex scenes are also smoking hot, just reading about that magic that Xbal was doing to Cassie had me sitting in front of a fan. Anya Richards does a remarkable job of creating her characters and a world for them to live in. Xbal is a super sexy, confident man, with the ability to weld sex magic. Who wouldn't want to be with a man who could do that? Xbal is also an immortal jaguar god. Cassie hasn't let herself or anyone get to close to her. She knows what is expected of her and will do her duty. I really liked Cassie, she is a very strong woman, determined, and wasn't afraid to go after what she wanted. I thought the fun banter she exchanged with Xbal added to the sexual tension between the two. I was very curious as to how Ms. Richards was going to end the book, and found the ending very creative. Jaguar In The Sun is book 4 of the Unveiled Seductions series, and even though I hadn't read any of the previous books in the series, I was extremely happy that it was written like a stand alone. This book was thoroughly enjoyable and I will definitely check out the other books by Anya Richards.

Email ThisBlogThis!Share to TwitterShare to FacebookShare to Pinterest
Labels: Anya Richards, Ellora's Cave. For Who The Books Toll, Jaguar In The Sun, review, Unveiled Seductions series