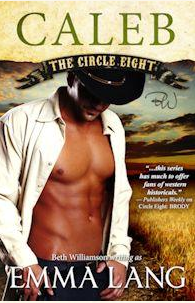 Reviewed for For Whom The Books Toll
5 stars, Spicy

A Texas Ranger, a lady blacksmith, a fierce passion, a dangerous game.

Caleb Graham has spent the last four years in too many dangerous situations to count. As a Texas Ranger, he knows no fear, or at least he never shows it. When he’s sent to force a blacksmith off government seized property, he runs face to face into the woman who will change his life.

Aurora Foster grew up on the very land the obnoxious Ranger is trying to throw her off of. Her parents and her husband died for it and there is no chance she would leave without a fight. A lady blacksmith might be an anomaly but she has the strength of the steel she forges and the courage to fight for what she believes is right.

When Aurora is inadvertently injured by Caleb, he seeks medical help from a neighboring ranch. The sprawling hacienda is full of the finer things in life and the one person Caleb never expected to see again… his youngest brother Benjamin. Forced to flee from a man who has kept the boy captive, the trio become traveling companions in a deadly game where no one wins.

Life turns upside down and sideways for Caleb and Aurora, caught in a game neither of them expected while they desperately try to save the boy who was lost to his family. Pursued and hunted, the three of them ride for the Circle Eight ranch. The unlikely pair of rescuers fight their attraction and for their lives

I am so enjoying The Circle Eight series by Emma Lang. The series can be read in order and also each story can be read as a stand alone. But be careful, you'll truly want to catch-up and read all the books.

Caleb is now working as a Texas Ranger and his life is full of traveling and adventure and no ties to home or a family. He loves his family, even though eventually they can grate on his nerves. Caleb is confident, strong, hard-headed, handsome as heck and a loner. He figures settling down isn't for him, he doesn't like to be pinned in. I so totally enjoyed how Ms. Lang introduced Caleb and Aurora. Their banter is fantastic and made me laugh so many times. Aurora is just trying to stay afloat. She takes any black-smithing job that comes her way. Caleb has a lot of adventure, some bad luck, some good luck and a surprise no one sees coming, including the reader. Ms. Lang is so very good and picking characters that are so right for each other, they just have to work at it first. You can almost feel the moment Caleb knows Aurora is the woman for him.

So far all the Grahams are very strong characters and endure much in their lives on their ranch. If you like handsome, sexy cowboys who never have a dull moment in their lives, and gets their life turned upside down, with lots of emotions and surprises, you'll love The Circle Eight series.