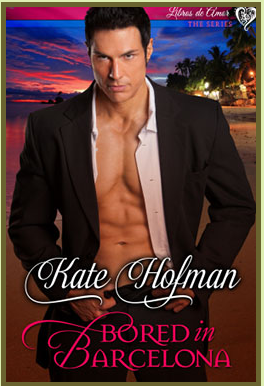 I received a complimentary copy of this book from the author in exchange for a fair and honest review. I rated it 4.5
out of 5 stars.

Reviewed for For Whom The Books Toll
4 ½, Spicy

Cynthia Wynne writes a disenchanted email to her favorite monthly magazine, telling them how bored she is in Barcelona. When the owner of the magazine shows the email to Rafael de Córdoba, world-famous writer of serious fiction, he becomes incensed.
When Cynthia and Rafael meet, the instant flare-up of interest is quickly doused when he realizes that she is the woman who wrote disparagingly of Barcelona, which he loves and where his parents live.
Later, he softens his stance, and their interest in each other deepens, but when she tells him she is pregnant with his child, he is upset and incensed. He had an infectious illness as a boy, and as a result was pronounced infertile.
Cynthia points out that she has never lied to him, and insists that the child she carries is his.
How can Rafael equate his trust in Cynthia with the doctor’s prognosis of long ago? Will his head rule, or his heart?

This was such a fun read, Bored In Barcelona by Kate Hofman has it all. Lots of action, two people that belong together, even though they don't know it yet, romance that sizzles, a serious issue that could tear them apart.

Ms. Hofman takes the reader back to the charming city of Ocean Breeze, FL and all the colorful characters. Tom is now running a magazine, East Florida Monthly and is trying to decide what kind of special column he wants to add. When his friend, Rafael de Cordoba visits the art gallery, the two men put their thinking caps on and come up with an advice column, Ask Aunt Grace.

Cynthia has saved for a long time to vacation in Barcelona. Unfortunately, when she gets there, she's very disappointed in the trip. So she decides to write a letter to Ask Aunt Grace. Rafael gets very upset when a letter bashes his homeland. I love how Ms. Hofman introduces Cynthia and Rafael. There are instant sparks until Rafael learns that Cynthia is the one who wrote the letter about Barcelona. But Rafael needs to keep his cool, he doesn't want it known he's Aunt Grace. I thought this concept of a man writing an advice column as a woman was just too funny. And she had great fun with it in the book. The chemistry between Cynthia and Rafael sizzles off the pages and makes for a great read.

Rafael is a very interesting character, he's a serious writer, confident, handsome, strong, and he loves women. I think it would be very intriguing to meet Rafael.

Cynthia used to be a ballerina until an injury stopped her dancing career, so she started her own ballet school. She's very responsible, confident, strong minded, and thoughtful. When Cynthia gets pregnant, it causes a lot of turmoil because Rafael has been told he's infertile. He's more inclined to believe an old Doctor than Cynthia. How will the two handle this crucial situation?