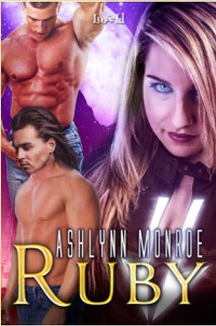 Hello and welcome to my stop on Ashlynn Monroe's Ruby Blog Tour.

Blurb:
Isser and Sol's pack is in trouble. Jewel's newborn cubs are ill and the pack needs money to treat them. Leaving the more experienced wolves to protect the women and children, the two bounty hunters agree to undertake a questionable assignment from known criminal Linus Lilymann. He wants them to find his stolen ruby and he insists he can't possibly go to the police. Normally, Sol and Isser wouldn't even consider it, but right now, it looks like the cubs only chance.The mission turns out to be not what the expected at all. For one thing, Ruby's a person, not a jewel. And for another, she's a dangerous tiger shifter who escaped her kidnappers only to spend her life in a convent worshipping a cat goddess. She's never been out in the world, she's utterly unprepared to deal with men like Sol and Isser, and what's worse, her first shift and her first sexual heat will happen on her twenty-fifth birthday. Soon. And only sex will help her hold onto her humanity.A tiger in heat will make a mate--or a meal--out of her first lover. Sol and Isser might be able to help her, but if they fail, their entire pack will suffer. It's a difficult decision: protect the pack or protect their new treasure.