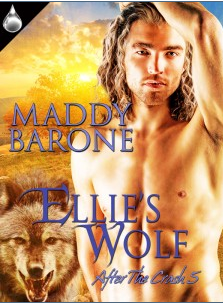 Reviewed for For Whom The Books Toll
5 stars, Hot

In a post-apocalyptic world where women are rare and valuable, Ellie Overdahl is a widow far from home at the mercy of strangers. Sold to be a prize in a Bride Fight, she manages to send word to her cousin, begging for rescue.

For six years, Quill Wolfe has mourned the loss of the woman his wolf chose to be his mate. When word comes that Ellie is widowed and about to be forced into an unwanted marriage, he races to enter the Bride Fight. He has waited long enough to claim his mate, and no fighter is good enough to keep him from her.

But claiming Ellie is only the beginning. It’s not only the journey home that is dangerous and uncertain.

My review:
I usually don't like to start a series in the middle of it, however, I really didn't mind with Ellie's Wolf by Maddy Barone. I didn't really feel like I was lost or missing out on the previous story line. Each book is written to be able to stand on it's own. Ms. Barone is has written a very clever story with a unique plot that has a lot of ups and downs and twists and turns that keep the reader on the edge of their seat. Ellie's Wolf is a definite page turner and difficult to put down.
Ellie endures so many hardships and I know I wouldn't be able to have been as strong as she. Ellie was determined, strong willed, and stubborn, and I really liked her. Ellie did what was needed to survive.

Quill Wolf was very easy to like, he was confident, loving, strong willed, and fought for what he believed in. Ellie and Quill were a great couple, they had excellent chemistry from the beginning. The villains in the story added mystery and hardship to the plot, and I really enjoyed how bad they were.
Now that I've started the After the Crash series, I have to read the rest of it.