Review for Bound at the Ball by Lea Barrymire 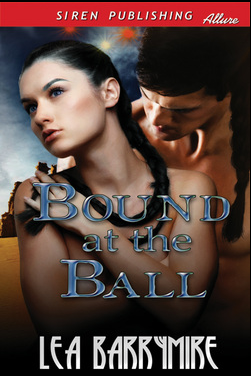 Title: Bound at the Ball
Author: Lea Barrymire
Publisher: Siren Publishing-Allure Imprint
Genre: Sci-Fi/Futuristic
Publication date: January 28, 2013
ISBN: 978-1-62242-424-5
Length: 151 pages
Book Series and number: N/A
Rating: 4 1/2
Heat Rating: Hot
I received a complimentary copy of this book from the author in exchange for a fair and honest review. I rated it 4.5 out of 5 stars.

Reviewed for For Whom The Books Toll
4 ½, Hot

Rella Cinder was born to the submissive race on her planet and has finally reached the age of maturity. She has hated her nature since birth and has fought her submissiveness. As the youngest of four sisters, she’s watched the others go off and look for mates. This time she’s forced to comply with the government’s edicts, which includes attending the Unity Ball and taking a mate from the warrior species. What she doesn’t know is that she has already caught the eye of a warrior before stepping foot into the Ball.

Warrior Sabar is ready to take a mate but doesn’t want a weak female. He sees what he craves in the willful Rella during her Initiation Ceremony. Her sweet submission and soft cries of passion are exactly what he wants in a mate.

Can they find each other before the Unity Ball ends? Or will someone else claim her?

My review:
Lea Barrymire is a new to me author and I totally enjoyed, Bound at the Ball. The story is set in the future on a planet inhabited by a race of submissive people, the Tropustyr. The Zabyr Warrior race came to the aid of the Tropustyrs and both governments enacted new rules for both races.

It's time for Rella to attend the Unity Ball and hopefully catch the attention of her future husband. Rella reluctantly follows the instructions of her cruel sister, always wanting to rebel against the rules. She might be submissive but that doesn't mean she doesn't have a brain. Everything about the Unity Festival and what happens between a man and a woman is kept secret from unwed women. Rella is frightened during the Cleansing Ceremony, when the dominant warriors come to her home for her cleansing.

Sabar has attended to other Cleansing Ceremonies and Unity Balls and has enjoyed himself immensely. There is something about this woman that draws him to her. He asks her questions about herself and forbidden activities and her answers inflame his libido. Sabar knows he wants Rella for his own, her strength and determination only make him want her more.

Ms. Barrymire creates a world where two seperate races live together for the benefit of each other. Her writing style is genius and her characters jump from the pages with their depth and dimension. Bound at the Ball is fast paced with a couple of surprises thrown in to create turmoil.

Rella is obedient and also has a mind of her own, with her own opinions. Why does everything have to be hush-hush about sex?

Sabar isn't really interested in settling down yet, he just wants to enjoy all life has to offer. He's definitely caught off guard by Rella. It was fun to read about their introduction, and the history about both races. Sabar also doesn't understand why the two governments insist on all the secrecy between the men and women. Sabar is strong, confident, and very sexy and there is great sexual tension between them.

I thought the concept of the story line very imaginative, the characters larger than life, the ups and downs intriguing and the ending wonderful. I did however have mean thoughts for Rella's sisters and wished she would have gotten her due. Hopefully Ms. Barrymire will revisit Rella and Sabar in another book.