Thanks for stopping by today and welcome to my stop on Theresa Weir's He's Come Undone Book Blitz presented by Xpresso Book Tours. Enjoy your stay at For Whom The Books Toll. I'm also giving one lucky commenter an ebook copy of He's Come Undone. All you have to do is follow my blog by email or GFC, leave a comment telling me which way you follow. Make sure to leave your email addy so I can notify you if you win.  Good luck to everyone!!! 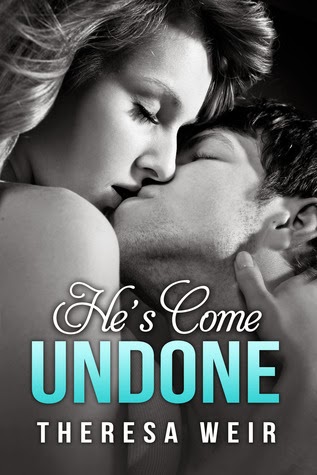 
Blurb:
Penniless and behind on rent, college student and once famous child actress Ellie Barlow takes on the role of a lifetime when she’s hired by a group of young women to break the heart of the campus player who cruelly dumped them.

Transformed from slob slacker to jaw-dropping beauty, Ellie is dressed, styled, bleached and waxed, her chunky glasses exchanged for violet contacts. Along with physical prepping, she’s coached on Julian’s obsessions, which include long-distance running, Doctor Who, and J.D. Salinger.

In no time, Julian is in pursuit of his custom-made next victim, but when Ellie goes off script and begins to fall for her target, the newest broken heart in this risky game could be her own.

I thought about taking a shower, knowing I should take a shower, but I felt this weird reluctance to wash Julian off my skin. And let's face it. I was still high from our hours together while at the same time trying not to think about never seeing him again. I didn't want to dwell on that.

The intercom buzzed. I pushed the Talk button. "Yeah?"

My heart began to pound, my mouth went dry, and my brain misfired. I took a few steps away, then I stopped and went back to the intercom on the wall. "Come on up." I pushed the button that unlocked the entry.

Seconds later I heard footsteps pounding up the metal stairs, then a weird rap on the door, more like someone had kicked it rather than knocked.

I opened it to see Julian standing there with a carryout bag between his teeth, and two coffees, one in each hand.

Stepping inside, he passed one of the coffees to me, then pulled the bag from his mouth and dropped it on the counter. "Breakfast," he explained.

This was not supposed to happen.

Well, in the original version, in the revenge girls' version, this was exactly what was supposed to happen. But in my version…no.

"I don't know how you like your coffee. I have a latte and straight black."

"Latte," I said in a baffled voice.

What was he doing here?

I sipped the latte, but I wasn't sure my stomach could handle anything else. I was so nervous, and I'd hardly slept—a bad combination.

"I didn't think you'd come back," I found myself saying.

His eyes were a little bloodshot, and his hair was a mess, and he needed to shave. His lips…his lips were red, and I wondered if they were as sensitive as mine were this morning. After all the kissing…

"Why'd you think that?" he asked, putting his coffee aside, removing his jacket and tossing it on a chair.

I shook my head, my heart still pounding. I've always laughed at the ways people described sex and attraction. It always seemed so corny and melodramatic. And then there was the whole physical response. The body that responded without engaging the brain.

I was experiencing that now. And it was kind of funny, but not funny. I actually felt hot all over, and especially hot and even swollen between my legs. Like if a female could have an erection then I was having one.

We were both thinking about sex—that was obvious.

"I have roommates," I said.

"No. But they could come home any time."

"So we should go someplace private."

I put my hand in his and led him to the bedroom, to the rumpled sheets spilling to the floor, a space that still smelled like warm bodies. As soon as the door clicked shut, we reached for each other, now, in the bright light of day. I tugged my T-shirt over my head, and before he could help me I stripped down to nothing, kicking my yoga pants and panties aside.  Still dressed, he pushed me back on the bed, his breathing uneven. "God, you're so beautiful," he whispered in an awe-filled voice that made me even hotter. 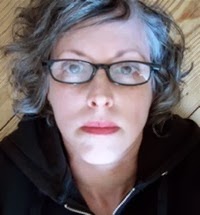 Her first memoir, THE ORCHARD, was a 2011 Oprah Magazine Fall Pick, Number Two on the Indie Next list, a featured B+ review in Entertainment Weekly, and a Librarians’ Best Books of 2011. Her second memoir, THE MAN WHO LEFT, was a New York Times Bestseller. Going back to 1988, Weir’s debut title was the cult phenomenon AMAZON LILY, initially published by Pocket Books and later reissued by Bantam Books. Writing as Theresa Weir, she won a RITA for romantic suspense (COOL SHADE), and a year later the Daphne du Maurier for paranormal romance (BAD KARMA). In her more recent Anne Frasier career, her thriller and suspense titles hit the USA Today list (HUSH, SLEEP TIGHT, PLAY DEAD) and were featured in Mystery Guild, Literary Guild, and Book of the Month Club. HUSH was both a RITA and Daphne du Maurier finalist.