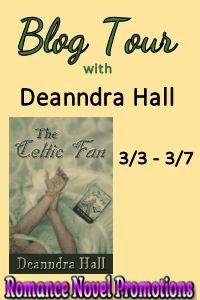 Welcome to my stop on Deandra Hall's The Celtic Fan Blog Tour & giveaway!! Thanks for stopping by today, please fill out the rafflecopter for your chance to win and make sure to visit the participating blogs.


Tell us your latest news!
It’s The Celtic Fan! This book was a miracle in itself. It was lost for 13 years before it turned up again on Halloween night last year – not kidding. I wrote it in three days in 2000 while my daughter was in Europe, then lost it in a technological jungle of changing media drives and old computers and the like. I couldn’t believe it when I found it, and it was just as beautiful as I remembered it. And the cover was the concept that I’d had for it for the whole 13 years, except I didn’t think I’d ever see the manuscript again. The model on the front is ME!

When and why did you begin writing?
When haven’t I written? I can’t remember. I do remember that I wrote some kind of story in third grade and it lit the writing fire under me. I wrote all through junior high and high school, but the dream of being a writer got put on hold for raising a family. The whole time I was growing up, I truly believed that I was going to be a high school English teacher. The idea of being a full-time writer never occurred to me. It’s risky, and my family wasn’t much into risks.

When did you first consider yourself a writer?
When I started getting serious about my craft, I decided I’d better go back to school. The first night, the very first class (English), the very first thing we did was write. I wrote a paper, in pen, that contained a three-point introduction, expanded the three points individually, and then followed with an echoed conclusion. The instructor got up the next week and handed them back. Mine was an “A.” Then he announced, “I want you all to look at this woman. She’s easily the best writer on this campus – the best writer we’ve had around here in a long, long time.” I was shocked. I took the paper home and laminated it! He got a big kick out of that when he found out. But I knew right then that I was onto something. Then I wound up in a critique group that was made up of English professors, music instructors, and a geoscientist, and I was holding my own with them. A group like that didn’t kill me; it actually made me stronger.

What inspired you to write your first book?
I just realized that The Celtic Fan really was my first book! The character of Nikki from my Love Under Construction series had been with me for at least 12 years when I wrote the first book in that series, Laying a Foundation, and Diana from The Celtic Fan was the archetype for Nikki’s character. If you read both books, you find out that they have very similar backgrounds, and there’s a reason for that – it’s because, in reality, those two characters are the same person. I love the mountains, and when I found Steve, I loved him. The one thing I insisted on was that they be older. I wanted readers to know that people over 40 have love lives too. I made them over 50 and smokin’ hot, and it put Diana and Steve right where I wanted them. And I’ve been pounding the keys ever since.

Do you have a specific writing style?
Let’s see . . . I’m the queen of ellipses! And long dashes. And semi-colons. And sentence fragments (see how I did that? Smooth, huh?). Actually, if I had to claim a style, it would be that my work is heavily dialogue-driven. I want people to hear my characters’ voices. They deserve to be heard. It’s through the dialogue that readers understand them. And it’s a lot more interesting than paragraph after paragraph of description.

How did you come up with the title?
When I started writing this book, I couldn’t figure out what to call it. I thought about something with the word “mountains” in it, but that seemed hokey. Then I thought about the “author” aspect of the story and wondered about something using the words “writing” or “words.” But when I saw the tattoo in my mind, it all came together, Diana’s coloring, the mountains, Bill’s story. It fit perfectly, and The Celtic Fan was born. I love it! And please take a second to appreciate the artwork of the tattoo and the chapter headers and section separators. A talented local artist named Carrie did that for me. It’s beautiful and exactly what I saw in my mind.
Thanks for having me for a visit today. I hope your readers enjoy The Celtic Fan. 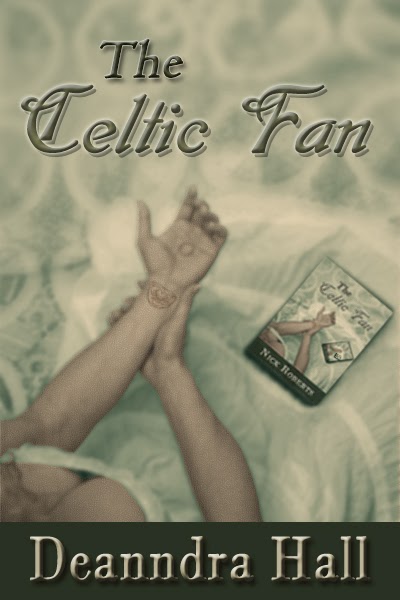 Who is Nick Roberts?

The Celtic Fan is a runaway bestseller. But no one's seen its elusive author. Nick Roberts doesn't do book signings, TV appearandes, or interviews. He's not on social media. No one knows him. And dozens of Internet groups have popped up, all looking for him, and some offering rewards for knowledge of him and his whereabouts.

Four old friends are planning their annual "guys roadtrip" when Russ comes up with an idea: Armed with an address stolen from the publisher's database, they'll go in search of Nick Roberts in a sleepy little North Carolina town near the Smokey Mountains. But as Russ, Michael, and Jim get distracted by other things, only one stays the course: Steve Riley, a journalist from Knoxville, is determined to find Nick Roberts.

Once on his quest, dealing with a deluge, flash flood, and an obviously incorrect address thwart Steve's chances to find Roberts. But as time and the elements have their way, Steve realizes he might be wrong about his failure. The question ceases to be finding Roberts.

It turns out the real question is, if he finds Roberts, will he tell?

Set in the foothills of the beautiful Smokey Mountains, Steve's story is interwoven with Roberts' original tragic tale of Bill and Claire, two young people in love in post-World War II America. It's a story of love, loss, and one man's tale of a story he never thought he'd tell.

The Giveaway:
Deanndra is giving away 3 signed copies of The Celtic Fan either print or Ebook to 3 random commenters.

Monday March 3
For Whom the Books Toll

Friday March 7
Romance Book Craze
Posted by Unknown at 12:02 AM