Welcome to For Whom The Books Toll. Today is the cover reveal for Face Time (Love in the Digital Age #1) by SJ Pajonas. This cover reveal is organized by Lola's Blog Tours. The cover is designed by Forward Authority. 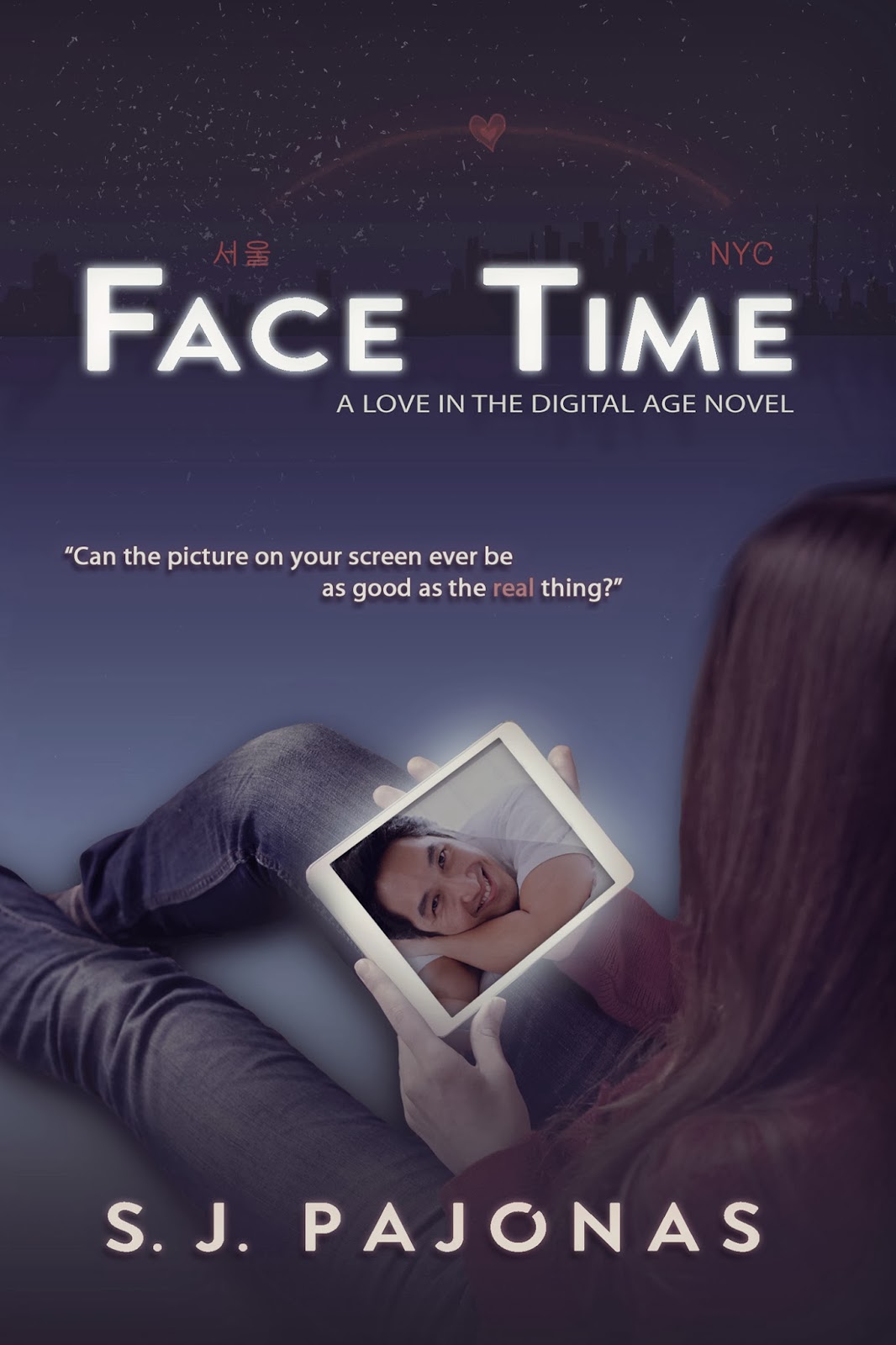 Blurb:
After the best first date ever, Lee thought Laura was funny, intelligent, and impulsive; a whirlwind of bright laughter and happiness. Laura loved Lee’s sweet smile and the way he expertly filled in every awkward pause. He held her hand and then pulled her in for the most perfect kiss she’s had in years. What could possibly be wrong? Just the 7000 miles that separates them the next day.

Even though Lee has gone home to Seoul, Laura can’t stop thinking about him. What starts as an innocent text thanking him for their dinner date becomes something much more: someone either of them can’t live without. But Laura’s got a live-in mother going through a midlife crisis, and Lee’s stressful traveling schedule means they’ll be apart for some time. Life, family, and a complicated past also get in the way, and they’re both going to need actual face time to figure it out.

Told from both Lee and Laura’s point of view, FACE TIME is a funny, romantic, modern-day story about two people who connect across the world.

You can find Face Time (Love in the Digital Age #1) on Goodreads:,

Are you a Wattpad user? S. J. Pajonas will be posting the first chapters of FACE TIME to Wattpad starting March 9, 2014. Follow her to get a new chapter each week, six in total, leading up to the publication of FACE TIME. http://www.wattpad.com/user/spajonas

Lee’s eyes are bloodshot and tired, his rounded cheeks sunken in with fatigue, but it looks like he won’t leave unless someone comes along and peels him off the couch.

I hate to do it, but I lean forward and squeeze his knee. “Lee, you look so tired, and I know you have to be up early. We should call it a night.”

Disappointment falls over his face and he sighs, putting his hands on his knees and forcing himself to stand up. Once my coat is buttoned-up, he reaches out his hand and helps me up with a smile.

Outside, I direct him north on Broadway to Third Street where I can get a cab going west towards Chelsea and be home in ten minutes. I used to walk this area all the time when I went to NYU, and the corner of Third is as good a place as any to say goodbye. An NYU building towers over this corner, fenced in by greenery and a large tree arcs out overhead. In a few weeks, the branches will be filled with buds and trees will explode with leaves all over the city. I can’t wait for spring.

“You live on Fifteenth Street, right? I saw the address you sent me,” Lee says, his hand clutching mine. “Over by Chelsea Market?

“Yeah. I go there all the time. The neighborhood has grown in the last few years especially. It doesn’t look anything like it did when I moved in.”

“Seoul is always changing. After the war, it just grew and grew and now there are new buildings up every year there.”

Our conversation dies as we near the corner, and I slow down to a stop. I… I really don’t know what to do. I know this can’t go anywhere.

“Okay. Laura…” He turns to face me, so very close. He withdraws his warm hand from his pocket and softly strokes the length of my chin, pushing my eyes up to his. I guess I’m not the impulsive one tonight. “I’d like to see you again. Somehow. I don’t know when I’ll be back in New York, though.”

“I think I’m up for almost anything when it comes to you. In fact…” He steps in even closer, letting go of my hand and pulling me in by the small of my back. “I’m going to kiss you, and I’m not going to regret it for a second.”

Pulling my face to his, our lips meet hesitantly at first, warmth growing between us as a breeze curls around my legs and up my jacket. His lips brush against mine, feathery light and playful, soft and sweet, the test kiss when you put your toes in the water and see if the bath is hot enough. Then I lean in and bind my lips to his. This kiss goes all in, a deep inhale followed by the kind of release that makes my eyes roll back in my head. If I were paying closer attention, I’d notice the curry, the beer, and the coffee, but instead all I sense is the seed he’s planting in my soul, the one that takes root and convinces me I’m a worthy person again, worthy of love and affection, worthy of attention.

I set my hands free from their safe haven between us and wrap them around his waist, sighing and enjoying this regret-free kiss. It just pushes Lee even closer, both of his hands on my cheeks, guiding my mouth into his, and his relief is evident in the release of his muscles along his waist and back.

Earlier, I wanted to pause time in several instances — when he took my photo, when he held my hand, when he smiled at me over the top of the coffee bar — but, now, this is what I want to remember. This is the moment when he likes me for all the right reasons, and I want to capture that blissful ignorance and never live without it.

The moment unsticks, our lips pulling away at the same time, and he kisses me along my left cheek to my ear. I hug him close and rest my forehead on his shoulder.

“Thank you for tonight, Laura,” he whispers in my ear, and I nod into his sweater, letting myself feel happy for this instead of sad he won’t be here tomorrow. We dislodge our arms from each other and do our best to smile at one another before he takes my hand, leads me to the curb, hails a cab, and puts me in it.

“Don’t be a stranger, Lee,” I say, before raising my eyebrows at him and closing the door.
My last glimpse is the smile on his face, his hand raised in goodbye, as my cab speeds away down Third Street. 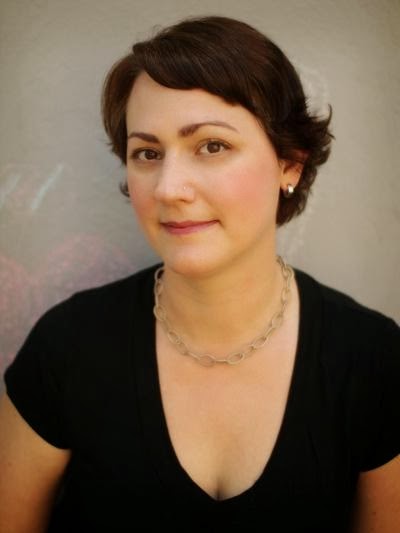 S. J. Pajonas loves all things Asian and has been in love with Japan for as long as she can remember. Writing about Asia and Japan came naturally after studying the culture and language for over fifteen years. She studied film and screenwriting first and eventually segued into fiction once she was no longer working a full-time job.

Released is S. J. Pajonas’s second work, book two of four in the Nogiku Series. The first book in the series, Removed, is described as “a wonderful story” with “engaging characters, seamless world building, and an action packed plot.” It’s an “up-til-3am-because-I-read-it-in-one-sitting book.” She also writes contemporary romance and her upcoming first book in the Love in the Digital Age series will be published in 2014.

S. J. lives with her husband and two children just outside of New York City. She loves reading, writing, film, J- and K-dramas, knitting, and astrology. Her favorite author is Haruki Murakami and favorite book is The Wind-up Bird Chronicle.

A Little Bit of R&R

Welcome to Your Next Fantasy

Through the looking glass

For Whom The Books Toll