Review for The Trouble With Sin by Victoria Vane 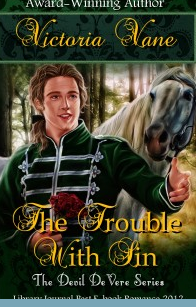 Reviewed for For Whom The Books Toll
4 ½, Spicy

**Special Note:
The Trouble with Sin (Devilish Vignette #2) is a comic romp that follows on the heels of Devil in the Making. It is also a prequel to Jewel of the East ( book #5 in the Devil Devere series)

The Trouble with Sin … Is the devil within…
Aspiring poet Simon "Sin" Singleton, has lived his life only for larks, laughter, and ladies of easy virtue, eluding defying, and flouting all manner of authority until his impetuous misdeeds finally catch up with him. Having lost his muse, his allowance, and even his friends by edict from a tyrannical father and puritanical mother, Simon is ready to drown himself in drink, until receiving an ingenious proposition that could change everything.The wages of Sin is…...twenty-five percent of the net!
It seems a fantasy come true when Simon is offered an independent income by combining his two great passions— poetry and lewd women —by writing poetry about lewd women! Unfortunately, maintaining anonymity may be much harder than he thought…

Oh my gosh, I'm still laughing after finishing The Trouble With Sin by Victoria Vane. She has the uncanny ability to infuse her characters with such wit, depth and dimension, which makes them so easy to relate to. It's almost like I can imagine Simon, Ned, and Lord DeVere sitting in the pub being carefree and drinking.
Simon is very charming when it comes to the ladies. He has trouble separating his heart from his lusty escapades. While Lord DeVere has a love 'em and leave 'em attitude.

Simon's father has had it with his son's antics and has almost stopped his allowance.

Simon's mother is quite religious and would like her youngest son to join the clergy. In an effort to appease his parents, Simon agrees.

Seeking inspiration for his poetry, Simon is looking for a certain mild maid and learns she's joined the ranks of Jack Harris. Feeling down, Simon heads to the pub for an ale and is dismayed when he has no coin to pay. Simon tries to pay with a lewd poem he wrote, and Mr. Harris offers Simon a way to make some money. What happens next in the book will have you laughing out loud.

Ned and Lord DeVere learn of Simon's new job and think it will come back to bite him. Simon, however isn't really worried. Ned has news to tell his friends, and they are taken aback with the news. Determined to keep Ned from making the mistake of his life, Simon and DeVere try to get Ned in his cups. Unfortunately, Ned can hold his liquor better than they expected. Waking up the next morning with quite the hangover and three other people in his bead, Simon's luck has finally run out. A loud knocking on the door, and into the room strolls the magistrate and his mother! How ironic, this was another great outrageous adventure in the book.

Simon's father has had all he can take from Simon, and has arranged to buy him a commission in the King's Army in America.

This is another look into the earlier lives of the three friends. Ms. Vane's writing in all of these glimpses into the lives of these men is creative, full of emotions, character growth and show a great deal of research. Just when I think what else can Ms. Vane write about, she out does herself with the next book. I have really enjoyed all of the books so far in this series and wouldn't hesitate to recommend them to everyone.