I asked Em the top 10 things that makes a cowboy sexy. Here's what she answered: 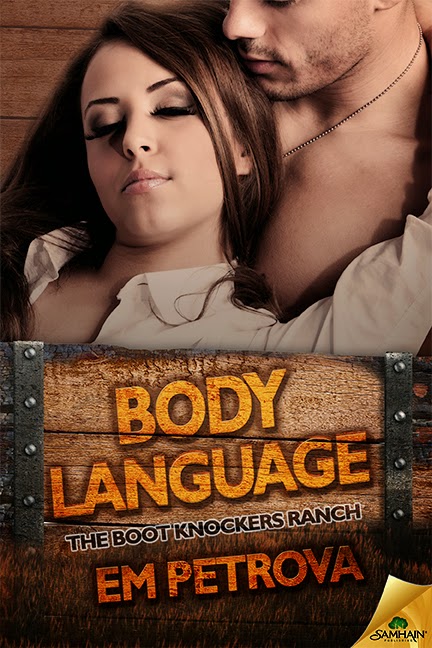 Blurb:
There are no words for desire this hot…but he’ll sure try to find them.

If there’s one thing that Damian Vince can do well, it’s read women. With his trademark wink and sexy drawl, he’s the most wanted cowboy on the Boot Knockers Ranch, a spa where sexually challenged women come to get charmed out of their uptight panties.

He’s also the ranch’s bad boy—he hates to admit he’s had his mug-shot taken more than once. But now he’s on the right path, ranching and fulfilling women’s desires.

Prim grade-school teacher Ruthie Johansson prays Damian will be able to fix her strict upbringing that’s left her leery of men and intercourse, though her body aches for both. Once she sets eyes on the muscular, auburn-haired Damian, she throbs only for him.

As they get skin to skin, her instinct touches something Damian’s been struggling to hide from his fellow Boot Knockers. A secret he’s spent a lifetime keeping buried beneath bar brawls and a bad attitude. But with Ruthie’s gentle coaxing, he just might give overcoming it another try—as long as they do their homework in bed.

Warning: Contains a bad boy with a vulnerable underside, a squeaky clean woman who wants to get dirty, and a secret shame only love and compassion can heal. Prepare to drool while he parses her sentences…one sexy verb at a time.

Excerpt:
The moment Damian opened the door to Bungalow 11 he was presented with the prettiest picture he’d ever seen. Ruthie seated at the small table, sexy as hell in a midnight blue top and tan shorts, hair falling over her eyes.

As he closed the door, she looked up and gave him a grin that made his heart soar.

His heart plummeted. Pulse throbbing in his temples, he took in the game board already set up before her. Hell no, I don’t wanna play Scrabble. He’d said similar things to every teacher he’d ever had. But not Ruthie.

Any game dealing with words was a red-hot poker thrust through the chest of a man who couldn’t read.

He cringed inwardly but tried to remain calm on the surface. “I had other games in mind, doll.”

Her eyes glazed over. “But it’s raining. It’s a good inside activity.”

Light streamed in through a nearby window, illuminating her perfect skin. Today she’d used mascara and lip gloss. Her lashes were a mile long, her lips so kissable he couldn’t resist.

Swooping in, he crushed his lips over hers. The strawberry gloss scent filled his head. With a rumble of appreciation he swiped his tongue over her lower lip. She encircled his neck with her arms and melted into him.

Pressure built in his groin. He half-lifted her from her chair, swiped an arm over the table, clearing it of those tormenting letter tiles, and spread her on the surface.

She burst into laughter, and he kissed her open mouth. Delving his tongue into her sweetness, swirling, lapping, teasing. He caught her knee and pressed it up and back so he could grind his erection into her pussy.

Her lips were swollen from his kisses, her eyes gleaming. She fumbled in his back pocket and came out with his wallet. His breathing grew labored. “Take it out.”

She opened his wallet and pulled out one of three condoms he’d stuffed inside this morning. Even knowing the bungalow was well-stocked, he’d packed his wallet with as many rubbers as possible. He didn’t want an excuse not to use one—though he craved that intense heat of being bare inside her.

Moving back, he stripped her top off and tossed it to the floor. Today she wore one of the bras he’d given her from the wardrobe closet—white with dainty pink hearts. He growled and dipped his head, biting into her nipple through the cloth while tearing at her shorts and panties.

After he pulled the matching thong off her bare feet, he wadded it up and stuffed it in her mouth. Her eyes flared in shock.

His voice was ragged. “You look sexy as hell.” With wild tugs, he shed his clothes while holding her gaze. Her cheeks were pink, her eyes losing a bit of her shock. By the time he had the condom in place, he was ready to explode.

Leaning over her again, he nuzzled the corner of her mouth, stuffed full of her fragrant panties. “I’m going to make you scream and scream with pleasure, doll. But no one will be able to hear you.”

She made a sound. Fuck, what he wouldn’t give to tie her up too. Not yet. Slowly.

He scooped his hands under her, cushioning her spine against the table, and drove into her in one sharp move. She pulsed around him, gripping his back. For a mind-blowing minute he thought he could feel her heartbeat in his own veins.

Then he began to move. Plunging so deep she cried out behind the gag. He closed his eyes and skirted the edge of his own release, dying to go fast and hard yet forcing himself to go slow.

“Put your legs on my shoulders.”

He met her dark eyes and couldn’t stop himself from sinking deep. When he pulled out to the tip, she placed her heels on his shoulders. Turning his head, he bit into her calf while taking her the way he wanted.

“Come for me, baby. I feel you squeezing me so…damn…tight.”

Her moan sounded like his name. He bent to her mouth and caught her thong in his teeth. With a jerk of his head, he tugged the silk free. She kissed him with a wildness that sent him careening toward ecstasy.

Reaching between them, he pinned her nubbin under his thumb. At the pressure, she came. Heat flooded him. His cock extended another fraction, then erupted. He sucked her tongue as he rode the uncharted waters of a release so big and intense, it scared the fuck out of him.

When he came back to himself, he found himself on the sofa with a naked Ruthie cradled on his lap. Her lips moved over his chest and up his neck, then down again. Tender kisses he didn’t deserve but wanted more than anything.

“Better than Scrabble,” she murmured.

In case you missed out in getting book 1 Pushin' Buttons: