Hold on tight for ten tales of intrigue and passion from New York Times Bestselling and award-winning authors. Men in uniform, sexy spies and pulse-pounding action fill over 650,000 words of this limited edition boxed set. 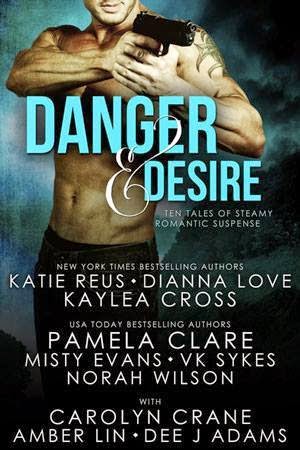 The individual novels cost over $35 in total and have more than 2,000 5-star reviews on Goodreads. This set is only available for one month, so grab your copy now!

Ebook or print? And why?
I’m going to take the easy way out and say both, lol! I actually prefer print for my non-fiction books. I read a lot of books for research; in psychology or criminal justice text books and autobiography type books and find them much easier to read in print because they’re usually trade size or huge textbooks. And some non-fiction books I read I actually can’t find in ebook for whatever reason so print is the only option. For my romance books, however, I prefer ebooks because those often come in mass market size (which I hate trying to keep those pages open!) and it’s just easier to carry around 100+ romance books on my kindle instead of in my purse.

What are your favorite TV shows?
I’m going to sound like a total TV junkie but here goes… Castle, The Strain, Major Crimes, Rizzoli and Isles, the older Supernatural seasons (I haven’t seen the last two b/c I lost interest), Burn Notice before it went off the air and Game of Thrones all the way!

What is your favorite meal?
I really love eggplant parmesan. Seriously, I could eat it all the time!

What makes you happy?
A quiet Saturday morning with a full pot of coffee, an empty house and hours to work on my computer with no interruptions. On the flip side, I love it when my boys (my husband and son) are infiltrating the house with their natural loudness and my little one is saying ‘mommy, mommy’ every two seconds because he doesn’t want me to miss a single second of the important things he’s doing like kicking a soccer ball in the kitchen or doing backflips off the couch.

If you could have one paranormal ability, what would it be?
To fly because come on, that’s pretty freaking awesome.

What is a talent you wish you had, but don't?
I wish I had a scrap of artistic talent. I can write a 100K book in 30 days but ask me to draw anything other than a stick person and it’s not happening. And even my stick people are pretty embarrassing. My husband is amazingly gifted when it comes to drawing and it makes me crazy because he rarely does it. It’s like he’s just sitting on all this talent. And the other day my 3 year old drew a cat better than I could ever could… and laughed at me when I tried to draw Mickey Mouse for him. Getting mocked by a 3 year old = awesome.

Favorite place to read?
A year ago we moved and got all new furniture and one of the purchases was for me alone. I got a leather chair-and-a-half because they’re freaking huge and cushy along with an ottoman and I absolutely love it. I love curling up in it with a mug of hot tea or a glass of wine and just reading in silence. It doesn’t happen often so I savor that time in my chair!

Favorite non-alcoholic drink.
I live in the country so Starbucks is a pretty rare thing (heh, I have to drive two towns over to get to one), but I love their chai tea lattes. Love, love, love them!

What is your work schedule like when you are writing?
Ha, when am I not writing? Writing is my full time job and I work between 40-60 hours a week, depending on things. This summer has been a little crazy but my ‘normal-ish’ schedule during the school year: I wake up early before my son gets up so I can sneak in an hour or two of catching up on emails and social media time. Then after dropping him off at pre-school, I chug a couple cups of coffee and try to knock out 3K words before noon. When working on a project, which lately is pretty much *always*, I tend to write 3K words a day, 5 days a week no matter what. It usually ends up being more, but that’s my goal and anything else is just cake. Then in the afternoons if I’ve met my word count goal I get caught up on other things like print book formatting, promo stuff, website updates… and a billion tiny things that just need to get done during the week. Other than actual writing, the stuff I do changes week to week. Luckily I get to be pretty flexible with my schedule. The only thing I’m not flexible with is my word count. No matter what, I try to write 15-20K a week.

If you had to do your journey to getting published all over again, what would you do differently?
I wouldn’t be so eager to sign with a publisher that I wouldn’t do my homework. Early on in my career I signed with a small publisher (and have since gotten all my rights back) for three books. I should have waited and honed my craft more and learned more about contract negotiations. Basically, I would have had more patience, done a lot more research and talked to other authors about their experience with that house. It’s hard to regret that decision though, because by signing with them I ended up meeting someone who is now my best friend and the best critique partner I could ask for.

Excerpt from Sensual Surrender by Katie Reus
“I won’t miss it,” he said, taking his planner and setting it down without looking at it. He stared at his laptop, his fingers clacking away on the keys as he spoke. “Besides, you’re coming with me to that one. I don’t know why you’re so stressed today.”

She bit her lip, trying to find the right words. Impossible ones she just needed to get out. Maybe the silence was more weighted than she realized because he looked up then, his blue eyes electric in their intensity.

“You are going with me to that meeting?”

“Wyatt, I’ve enjoyed working for you more than I can say.” She smoothed her hand down her skirt again, a stupid nervous habit.
His expression went flat. “You’re not quitting.”

She blinked at his forceful tone. “I appreciate everything you did for me when I graduated.” He’d given her a job right out of school. She’d just gotten her Master’s in Business Administration and had been hungry to work. Landing a position with one of the richest men in the country had been a dream come true. She worked her ass off, but he compensated all his employees well and she loved what she did. Leaving this position was one of the hardest decisions, but she knew she had to do it. Once she told Kevin that she’d been fired—a tiny lie—she wouldn’t be able to help him with whatever plan he had to rob the Serafina. This was the only way.

Frowning, Wyatt stood, pushing his chair back before rounding his desk. Wearing a custom-made pinstriped suit, the tall man with midnight black hair and electric blue eyes, that were so damn intense as to be scary, was giving her all his focus. She didn’t like feeling as if she were under a microscope, but stood her ground.

Crossing his arms over his chest, he leaned against the front of his desk and faced off with her. Even though he wasn’t as tall as Jay, the man was certainly intimidating. She’d seen him use this glare with business associates and even enemies before and had never thought to be on the receiving end of one of his ‘looks’. “Are you giving your resignation?” he asked quietly, disbelief threading through every word.

Even though she wanted to stay strong, she dropped her gaze and fished out the folded piece of paper she’d tucked in the back of her skirt. It was slightly wrinkled as she handed it to him. “I’m sorry that I can’t give you two weeks’ notice and if you won’t give me a reference I completely understand. I hope that you will as I’ve enjoyed working here, but—”

“I’m not accepting your resignation,” he said calmly, his bluntness taking her by surprise. She forced herself to meet his gaze again. “Is this about you and Jay? Are you guys having problems? Whatever this is about, we’ll work it out. Do you want a raise? Hell, you deserve one so consider it done, effective tomorrow.”

She shook her head, taken aback by the offer. “I…” For a brief moment she thought of telling him that her thieving ex-boyfriend wanted her to steal from him. If she didn’t work here anymore, the bastard couldn’t blackmail her into anything. Which meant she’d become useless to Kevin and he’d leave her alone. She knew how that rat Kevin operated. But if she stayed on as Wyatt’s assistant, she’d always be a target for Kevin. He would keep coming at her until someone in her life got hurt.

Author Bio:
Katie Reus is the New York Times and USA Today bestselling author of the Red Stone Security series, the Moon Shifter series and the Deadly Ops series. She fell in love with romance at a young age thanks to books she pilfered from her mom's stash. Years later she loves reading romance almost as much as she loves writing it. However, she didn't always know she wanted to be a writer. After changing majors many times, she finally graduated with a degree in psychology. Not long after that she discovered a new love. Writing. She now spends her days writing dark paranormal romance and sexy romantic suspense.