Welcome to my post on Jamie Salisbury's Encore! One day Blog Blast hosted by My Family's Heart. 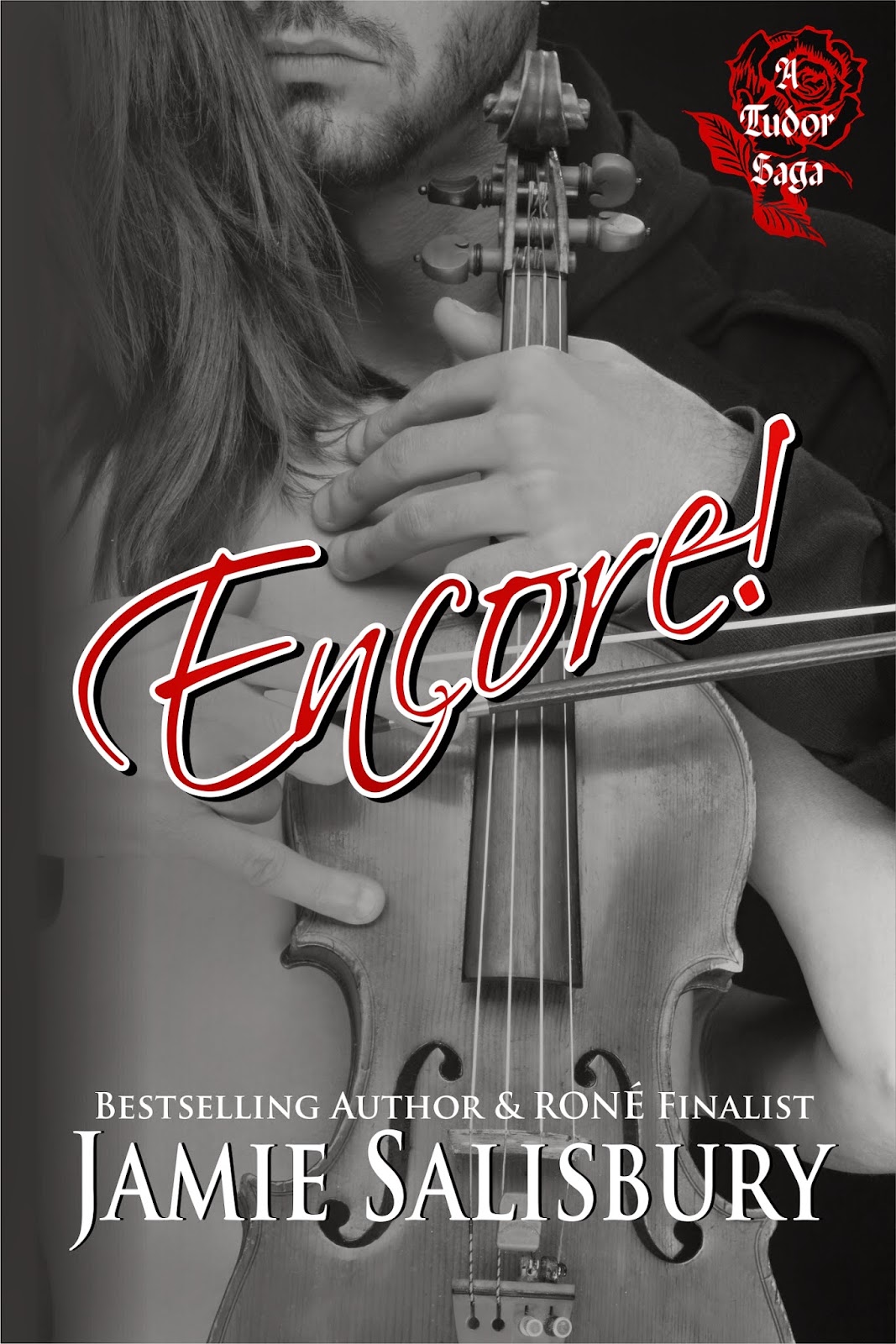 Blurb:
Mary Stuart and Daniel Kennedy have not seen each other since attending a prestigious performing arts school.

Now a world renowned violinist, and married to his career, Daniel stumbles across Mary through her images at a London gallery. He is in need of a photographer with vision - she is a photographer in need of clients.

Mary has all but given up the stage - or has she? Her photographs pay the bills far more than her fancy musical education. But Mary has secrets. . .secrets she dare not share with even the roguish Mr. Kennedy.

A roving paparazzi lens changes all that for them. . .

Can Daniel forgive Mary for hiding her past - and her present? Will their relationship break like a violin string - or will their love endure the chaos?

It was there one night when I was up on stage in my latex cat suit…my gimmick, my platform a mask, a Venetian masque. Always in one of three colors, purple, hot pink or green. I was an entirely different person as I sang my gut out and played my violin. Yeah you heard me right - violin. That night he stood at the edge of the stage, looking up at me, with a mischievous grin on his face. Mr. Violin Virtuoso himself, Daniel Kennedy. I had noticed him at the club a time or two before.

We had studied together in New York years ago. Only now, I could tell he was second guessing who I really was. Who is this woman who can make a violin weep, though not nearly as well as I can. She can, none the less, make the angels shed tears.

About half way through my set, I happened to glance down at this dangerously striking man and noticed he was still smiling. He raised his drink. Was it in a mock salute, or was it more? I was too into what I was doing to tell, much less care.

I never, ever mingled with the crowd after a show. Not that I wouldn't love to every now and then. No, I was afraid some young drunk jerk would pull off my mask, exposing my identity to the world. Then Archangel would be no more.

My requirements for playing in the clubs was a cab ride home and for the owner to escort me to the waiting cab, just in case. Other than that, I played for free. Self promotion at its best.

I was putting my violin away when I heard someone behind me. I immediately turned to see who it was. And Daniel Kennedy stood not three feet from me. In my personal space, again.

"Where did you learn to play?" he asked.

"Around," I replied smugly.

"Hmmm, mysterious. I like that. Could I interest you in a drink Ms. Archangel?"

"Thank you, but no. I make it a rule to never go out for drinks with clubbers."

The club owner appeared out of the hallway. "Cab's here. You ready, babe?"

I noted Daniel's grimace at the familiarity Jake had used with me. "Yeah, almost," I replied.

"Well, Mr. Kennedy, I look forward to seeing you brighten up my audience again soon." I smiled and turned toward the hall.

"Oh, I bet you say that to all the girl's you try to pick up." I teased, but he wasn't deterred.

"What sort of name is Archangel, sweet?"

"What sort of name is Kennedy?" I shot back. "I thought you were French. Kennedy is anything but French."

"My mother's maiden name, if you must know. My father's name is much too hard for English speaking fans."

"Scottish or Irish Kennedy's?" I taunted walking down the hall and towards the back door, my cab, and freedom from this inquisitive and delicious man.

As I reached the door Jake was holding open, I turned and looked down the hall. Daniel had stopped, his arms folded over his chest, his legs wide apart. He was quite a handsome thing with all his bling, tight jeans, T-shirt, and jacket. His face was rough with scruff. And that hair! My God what woman wouldn't die for a head of luscious hair like that?

Rather than continue drooling, I blew a crimson-stained kiss in his direction. "This is for you, Mr. Daniel Kennedy."

He played along, pretending to catch my kiss in his hand. He closed his hand and placed it over his heart. His smile made my body tingle in places-well in places that it hadn't tingled in quite a long time.

Raising my arm as high as it would go, I waved then pivoted on the ball of my foot. "Until next time, Mr. Daniel Kennedy. Good night."

Since Jamie Salisbury began publishing her Romance stories, she has seen her books soar to #1 on Amazon. Her novella Tudor Rubato was a finalist in the 2012 RONE (Reward of Novel Excellence) award, and the cover won for Best Contemporary Cover. Now in 2014, her novel Life and Lies was been nominated for a RONE in the Erotica category. She has expanded her audience to include several now published by Secret Cravings Publishing.

Her previous career in public relations in and around the entertainment field has afforded her with a treasure trove of endless story ideas.