Fifty Shades of Grey meets Lois Lane
In a world filled with books about controlling, dominant men, I set out to write about a female that was a match for them. It was a difficult puzzle at first, to figure out how an ordinary woman could compete with a high-powered billionaire, and hold her own against all his attempts to manipulate her.

Then it hit me. My childhood hero, Lois Lane, stood up to Superman on a daily basis.

Both in and out of the bedroom.

While my billionaire businessman Malcolm Cage is not a superhero, he is wealthy enough that he might as well have superpowers, along with the ego that follows them. But Victoria has a superpower too: her sense of justice and unshakable resolve ensure that she will never let this handsome CEO destroy her and trample her heart. Her self-esteem and values make her invulnerable to his cruel games and emotional torture.

My goal is to write books that are sexy as well as empowering, and I know that I have finally succeeded with this one. The chemistry between Victoria and Malcolm is sizzling and off the charts, but both characters are headstrong and challenge each other to be constantly better. Sometimes, it warms my heart when I see the fire and tenacity of Lois Lane rising to the surface in Victoria’s stubbornness. I really wanted to create a brave and ballsy female character for modern women to look up to, and I hope that my readers will find her inspiring. She definitely inspires me, and I love writing about her. 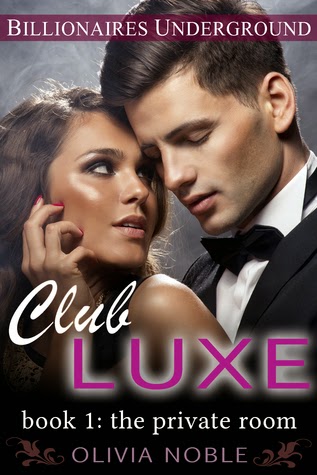 Blurb:
Victoria Chase is Chicago’s hottest new reporter, looking to make the scoop of the century. Rumor has it that in the bowels of the city lies a private sex club for the wealthy elite. Willing to do anything for a story, she infiltrates the club, determined to uncover this urban legend. She didn’t expect to run into him:

The famous billionaire bad boy is the king of Club Luxe. Every Friday night, he reigns supreme over untold sinful pleasures in his underground kingdom. His one rule? He never participates and only watches—until he sees Victoria.
She sets his body and soul on fire, and Malcolm does not plan on letting her go. Can Victoria keep it professional and get her story? Or will her heart betray her under Malcolm’s smoldering gaze?

“Welcome once again, my loyal subjects, to the private Club Luxe,” Malcolm said in greeting. “If you were invited tonight, congratulations. You are the most elite of the elite.” His lips pulled into a hard smile as his piercing eyes gazed over the crowd. He stood from his throne and felt his balls lift from the wood as he thrust a golden scepter into the air. “Tonight, let’s party like the gods we are!”

Everyone in the room cheered. Malcolm looked over their adoring faces with deep satisfaction. These Friday nights were always the highlight of his week. He could already feel his stress washing away with the promise of the indulgent revelry that was about to begin. However, there was something different about the club tonight. He squinted as he scanned through the crowd, feeling the weight of an unusual gaze upon him. When he found her, his eyes widened in surprise. Malcolm found himself gripping his scepter tighter as he gazed down at her.

The raven-haired woman looked at him with a defiance in her eyes that was exquisite. Malcolm was taken aback for a moment, before he remembered himself and the role he was currently playing. A devious smile spread across his lips as he looked down at the young reporter thoughtfully. Wicked ideas danced across his mind, and Malcolm knew he could not resist the temptation.

He began moving toward her, and his balls swayed between his legs as he walked. He moved to the edge of the stage until he was standing directly above Victoria. He felt his cock stir as their eyes became deadlocked in an intense gaze.

“I’m pleased to see a new face amongst us this evening,” he announced as he stared down at her. His lips pulled into a tight smirk. “Let’s say we give her a special welcome.”

The others politely clapped their hands and murmured in agreement. Victoria looked slightly nervous and Chloe glanced away from the bartender with concern. A pleased smile appeared on Malcolm’s face as he saw the reactions of the crowd. While he was usually reserved on nights like this, he could not resist the opportunity to toy with Victoria. Besides, if he was honest with himself, it had been a particularly stressful week, and was feeling the need to release his animal side.

“You in the black dress,” he said, pointing directly at her. “Come up to the stage. You will do the honors of beginning our night of lust.”

Victoria flinched ever-so-slightly before glaring at him. “How would you suggest I do that?” she asked cautiously.

“I want you to strip yourself down to nothing,” Malcolm commanded slowly, “and then bring yourself to sweet release in front of all these people.”

He saw a slight flash of fear pass through her eyes. He wondered if she would protest. After only a moment’s hesitation, she lifted her head proudly and took a bold step toward the stage.

“Whatever the king wants,” she said as she slowly climbed the stage.

Olivia Noble is a romance writer who likes to keep things steamy and sweet. Check out her first book, Just a Fling, featuring a handsome billionaire and a tropical island.