Thank you for taking a look at my stop on Em Taylor's A Desperate Wager Blog Tour & Giveaway presented by My Family's Heart. 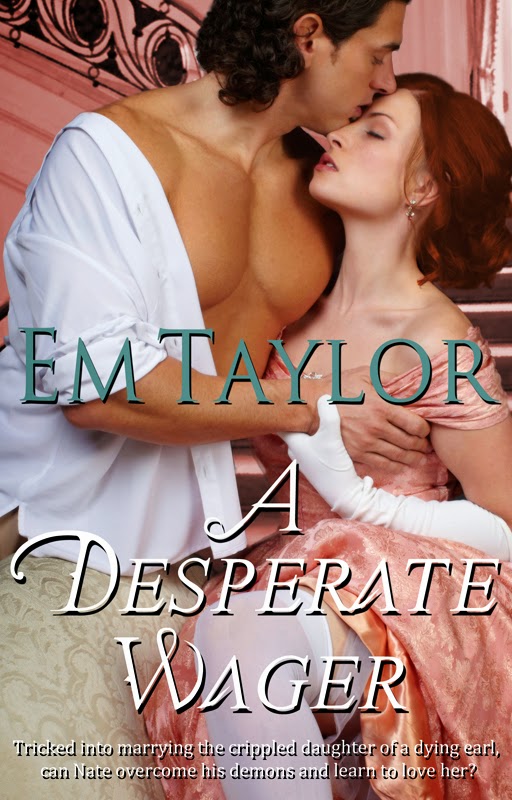 Blurb:
Nathaniel Spencer, the Fourteenth Duke of Kirkbourne wakes up with an almighty hangover and a wager note in his pocket stating he has agreed to marry the Earl of Brackingham’s daughter. And he can’t even remember ever meeting the chit. Clearly his drinking has got out of hand.

Lady Sarah Steele is horrified when her father announces that the Duke of Kirkbourne has agreed to marry her and even more horrified that her father wagered her hand in a game of cards. Not only that, but the earl has not told the duke of the riding accident that left Sarah paralysed when she was sixteen. But he’s dying and she knows he wants to see her settled before the inevitable happens.

Despite Nate’s drinking and Sarah’s possible complicity in the earl’s plan, they agree to marry. But when accidents start to happen, the newly-weds must deal not only with the fact they are practically strangers, but they must find out who is trying to kill one or both of them. Nate’s drink problem and Sarah’s disability are only a couple of the hurdles they must face to find lasting love.

Excerpt:
“Exciting, eh?” He pressed a kiss just below her ear and with a sigh, she moved her head to give him better access.

“Very,” she breathed out. Was this the feeling she was meant to have? The heavy weight of anticipation in her chest, the fluttering of her stomach muscles, the desire to rip his shirt from his back and press her lips to his chest?

She wanted his touch very badly. It was as if that one night had opened a bottle of the sweetest perfume and she had no desire to place the stopper back in it. He pressed her knees apart and moved between her thighs, lifting her gown. He moved closer to the seat. He tugged her to the front, and she wrapped her arms around his neck. Was he going to lift her to the bed? She could feel him pressing against her sex, and a whimper escaped her—not one of fear, but one of wanton need.

Nate wrapped his arms around her, unbuttoning her dress then tugging it off her shoulders. He started on the laces of her stays. All the time he nuzzled her neck, his day beard rasping on the soft skin, his lips soothing where the bristles had scraped. She clung to him, desperate to explore him but unsure of herself—afraid of appearing gauche and unskilled.

As the restrictive stays loosened, Sarah gulped in a large breath. The ribbon on her chemise was untied and the garment began to hang. Nate trailed his lips down her chest and over the rise before running his tongue over her taut nipple. She gasped in surprise. Had it been this good last night?

“Damn, your breasts are perfect.” He sucked and let go with a pop. He captured her nipple again with his lips.

Sarah pushed one hand down the back of his shirt, desperate to feel his flesh now. His muscles were hard, and she felt the rumble in his chest as he groaned against her other breast. That tension was back in her belly and lower, as was the need to have him touch every part of her. He unbuttoned his shirt, still licking the pert nubs.

As he helped her pull her arms free of her clothing, he pulled away and surveyed her. Then he tugged his own shirt over his head.

“Put your arms around my neck,” he growled. She did as she was told and he drew her to her feet abruptly, pushing her clothing down so that it pooled in a small pile of cotton and muslin on the floor.

To her complete astonishment, he grabbed both her thighs at once and lifted her to straddle him before stalking to the bed. She had never been manhandled in this way. Had she not been clinging to his neck she would have fallen. But there was something about the way he prowled towards the large double bed that sent desire coursing through her. She could learn to like being manhandled if he was the one doing it.

Her breasts pressed against his slightly hairy chest, and she breathed in his scent. She dropped a kiss to his shoulder, not wanting to break the closeness.

He dumped her unceremoniously on the bed, pushing her knees apart and kneeling on the floor between them. He kissed one thigh, then the other. She knew they were not light caresses, but she could only feel a whispery touch. It made her shudder. He kissed again, higher up, closer to the apex and her most intimate area.

“Nate?” He did not respond, but he smiled momentarily before kissing just below the triangle of auburn hair, on the flesh that ached for his touch. She sucked in a breath as his tongue extended and he licked the soft flesh, sending need spearing through her.

“Nathaniel!” she gasped, but he was licking through the crease, urging the tension into her body a hundred fold. She raised herself, craning her neck to witness this phenomenon. He really was licking and kissing and suckling her there. And it felt wonderful. 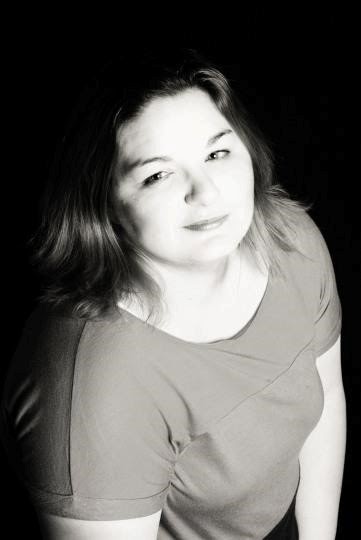 Em was born and brought up in the Central Belt of Scotland and still lives there. She was told as a child she had an over active imagination--as if that is a bad thing. She's traded her dreams of owning her own island, just like George in the Famous Five to hoping to meet her own Mr Darcy one day. But her imagination remains the same.