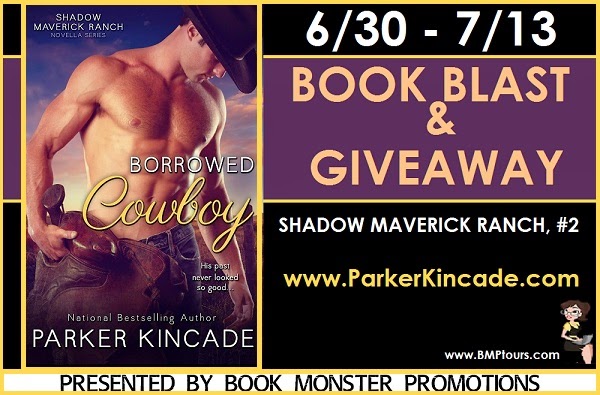 Welcome to my stop on Parker Kincade's Borrowed Cowboy Book Blast & Giveaway presented by Book Monster Promotions. Make sure to fill out the rafflecopter form. 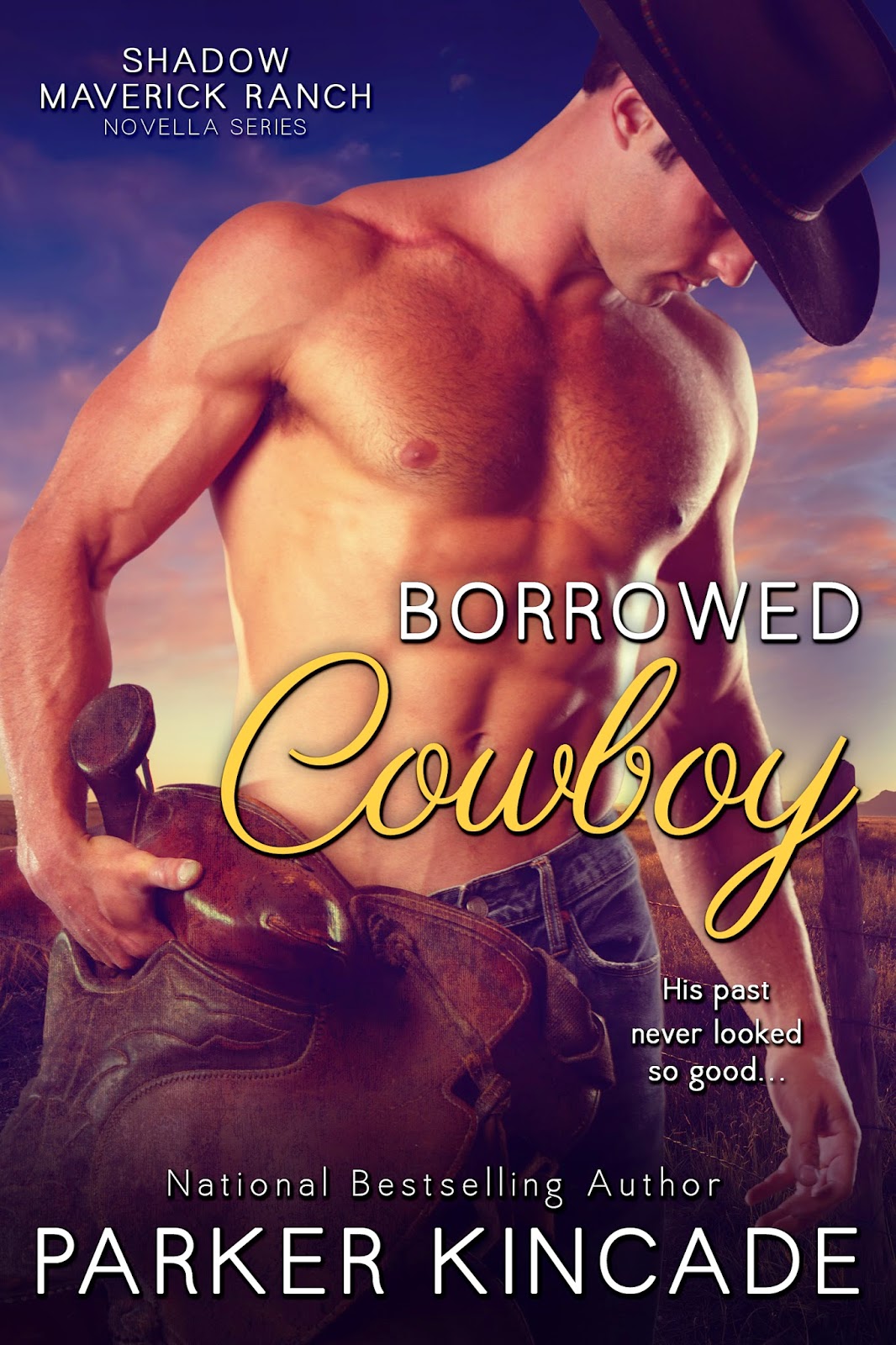 Blurb:
His past never looked so good…
Paxton Mathis is committed to bachelorhood. One failed marriage was more than enough to remind him of the dangers of getting too close. He has his work on the ranch; he has his family. He has everything he needs.

Event planner Reese Jameson accepted the job at Shadow Maverick Ranch for one reason: to face her biggest regret. Paxton Mathis was her first love, her first everything. And ten years ago, after a night of unbridled passion, it all came crashing down.

The moment they see each other again, it’s clear the years haven’t doused the heat between them. On the contrary, their flames burn hotter than ever. Despite Paxton’s attempts to keep things casual, old feelings emerge alongside a fierce hunger to keep Reese in his life forever. Reese willingly accepts Paxton’s need to keep things casual, but she’s worried her heart won’t get the message.

When Paxton is forced to face his fears, will history repeat itself, or will he take a chance on a whole new future?

It was a mistake. He should walk away before they got in any deeper. His boots had other ideas.

As the song came to an end, he pushed away from the bar. He met Reese half way back to their table, grabbed her hand, and walked her back to the dance floor.

Pax swung her around and brought her in close. He put his mouth to her ear, swaying them to a slow country tune. “Any objections?”

Her fingers toyed with the ends of his hair. “None I can think of, although your hand on my ass might tip off your family that we’re more than just friends.”

She looked away as though she hadn’t intended the implication of more.

“Let them think whatever they want. We’re consenting adults. And I’ve been thinking about you all week.”

“You have? What have you been thinking?”

He moved his hand to splay across her lower back and tightened his hold. He wanted her to feel what she did to him as he eased them around the dance floor. “About how much I’d like to get you naked again.”

Disappointment blinked across her features before she smiled. “That was fun, wasn’t it?”

He leaned back to catch her gaze and dove in, head first. “That’s not all I want.”

“You offered me pleasure, and I said yes. What more is there?”

He was such a dick. He’d made this beautiful woman think she wasn’t anything more than a sex object to him. Hell, he’d told her as much.

Life fucking sucked sometimes. He wished like hell things had been different. That he hadn’t walked away from her all those years ago. That he hadn’t married the wrong woman and forgotten how to trust.

“That’s what I want to figure out. I don’t know what I’m doing here, Reese. I haven’t felt the urge to have a woman in my life since my marriage fell apart.” Could he do it? Let go of the past and build something new? “Seeing you again, being with you … I want more. I won’t make promises I don’t know if I can keep and I don’t want to hurt you, but I want more.”

She laughed softly. “Why, Paxton Mathis. Are you asking me to go steady?”

A smile played at his lips. Pax shook his head, amazed at her ability to ease the tension. “Nothing quite so sweet, I’m afraid.” He bent and brushed his lips against hers. “Just a chance, Reese. To explore each other. To see what we could be together.”

“Just so I understand, you want us to only see each other?”

Pax shoved deep the emotions her words provoked. Jesus, was he sweating? Who knew this would be so hard? The visual of Reese, dancing in another man’s arms, propelled his vocal cords. “Yes.”

She nodded. “I’d prefer it that way as well. Since we didn’t use condoms last time, I assume you won’t want to use them in the future. You haven’t slept with anyone else this week, have you?”

“Are you kidding me?” When had this become a contract negotiation? And what the hell kind of man did she think he was?

Oh. Right. Exactly the kind of man Gavin had accused him of being. Wasn’t that a kick in the nuts?

“Not even a little. It’s important to be safe, for both of us.”

So logical, his head spun. He hadn’t considered… “Did you have sex with someone else this week?” His feet stopped moving. The man Clay had seen her with last weekend?

The thought made him want to hit something.

“Of course not. But I need to hear you say it. Give me your word that if you find someone else you want to sleep with, you’ll tell me. Or at least use a condom.”

Pax cursed. He laced their fingers and towed her from the dance floor, straight out the front door. He didn’t stop until they’d rounded the building, the darkened area giving them some semblance of privacy.

He backed her against the side of the building and crowded her space. “Let’s get one thing straight. When I say you’re the only woman I want to see, I mean it. I’m not just fucking asking to pass the time with you until someone else comes along. No other woman stands a chance next to you.”

Okay, he hadn’t meant to say that, but now that he had, he wouldn’t take it back. He spoke the damned truth.

She shoved at his chest. “Ditto, buster.”

A low, guttural tone vibrated his chest a second before he captured her mouth with his. She gave no resistance; her tongue lashed out to meet his. Anger melted into lust as he tasted her, explored her mouth, taking everything she offered and demanding more.

Desperation and hunger fueled him as he cupped her breast. He cradled her, teased her nipple to a tight point with his thumb as the humid night air cocooned them.

He broke the kiss, rested his forehead against hers as he tried to find his breath. She was his, damn it. In this moment, right here, right now, she belonged to him.

He released the button on her shorts and slid the zipper south.

“Pax.” Reese’s nails dug into his biceps as he breeched her panties. “You seem to like putting your hand down my pants.”

“I’d rather use my mouth, but I’m improvising.” Warm, wet flesh met his fingers. He pressed in, curled a finger deep.

Reese went to her toes, a soft moan on her lips.

The sound went straight to his cock. “I’ve thought about this all week. Touching you. Teasing you. I’d hear your cries in my dreams, and I’d wake up hard and alone. Do you want to know what I thought about when I took myself in hand?”

He found her clit, pinched the tight bud between his thumb and forefinger.

Her breath hitched. “Tell me,” she pleaded.

Pax leaned in, kissed a path along her neck. Wildflowers mingled with arousal and he drew it in, filled his lungs until he’d memorized every facet of her unique scent. “I thought about this. You. How beautiful you are. How hot and perfect you feel when I’m inside you.” Sliding lower, he eased two fingers inside her, groaning as she squeezed him.

Her mouth was swollen from his kisses, her cheeks flushed with a desire he felt to his bones.

“We really should try this in a bed sometime.” Her hips moved in time to the thrust of his fingers.

“We’ll get to that. We’ll get to a lot of other things too. First things first.” Pax nipped at her lips. “I want to watch you come. Right here under the stars.”

“Up against the side of a bar,” she panted. Her nails dug in. His biceps were sure to bare her marks for days.

He chuckled. “I’ll make it worth your while, sweetheart. I promise.” He found her clit again. His fingers worked from memory, remembering exactly how she liked it. How fast. How hard. Ignoring his own painful need, he gave it all to her.

“Yes. That’s it. Just like that.” Her eyelids fluttered closed, her breaths closer together. Her muscles tightened and Pax took her mouth again, swallowing her cry as she came.

“So fucking sexy.” Pax eased her down, slowing his movements as her hips settled. With one last caress, he removed his hand. He wrapped her in his arms, lending her his strength while she found her own.

“I hope you don’t expect me to go back inside after that,” she said against his chest.

“Agreed.” Not with the hard-on he currently sported.

Her hand headed over his stomach, and Pax stopped her before she palmed him. He dropped a kiss to her forehead.

“Not yet, baby.” His control had met its limit. At this rate, he’d come before he could get his zipper open. Not happening.

He trailed the line of her bottom lip as it disappeared behind her teeth. 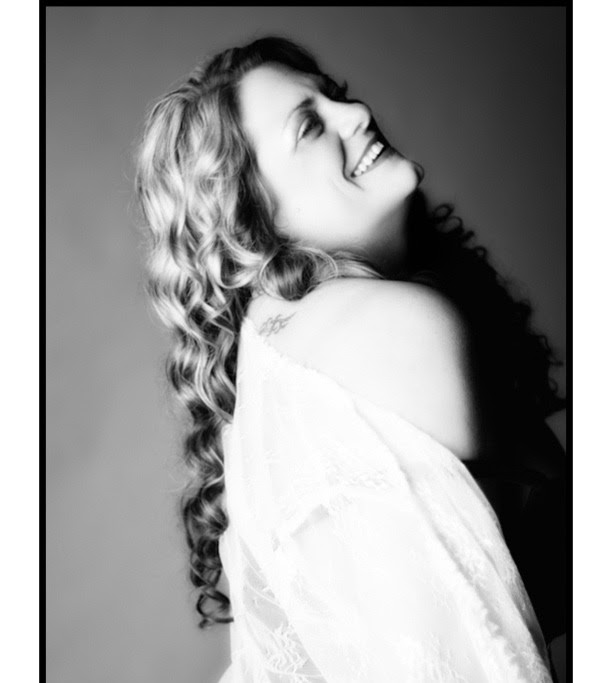 Tuesday July 1
For Whom The Books Toll


For the Love of Bookends