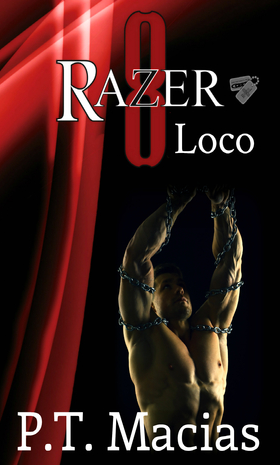 I received a complimentary copy of this book from the author in exchange for a fair and honest review. I rated it 2 1/2 out of 5 stars.

Reviewed for For Whom The Books Toll
2 1/2, Hot

The hard driven, ambitious delta force operative is immune to women. His heart has been destroyed by a treacherous woman and the unexpected loss of his family. These events have driven him nearly into insanity. The hard knocks in life propel him into grasping his emotions, his thoughts, and his physical condition. He focused on his goal. Loco doesn’t allow any type of distractions or obstacles to stop him. His actions and recklessness have earned him his nickname, Loco. The Infinite power, Razer 8 operatives, are united and linked for infinity. His team mates recognize his pain, anger, and strength is derived from the intense impotency he feels from his loss. The unexpected mission and unexpected encounter with his soulmate, tests his strength. His mind, heart, and soul recognize his love even before the actual encounter. The ruthless criminals threaten to harm his soulmate, pushing and transforming him into a fearless warrior.


My Review:
I was so looking forward to reading this book, unfortunately I was very very disappointed in it. The writing style was very hard to follow and has so many typos and mistakes that it took away from the storyline.

The characters do a lot of 'thinking' to themselves, almost more than interacting with the other characters. And almost all of the characters gets a point of view which makes the story even more confusing.

The story doesn't flow very well, when there is a change of subject or character view it appears just like it's part of the previous sentence.

I thought the plot itself was unique. It's too bad the characters mostly acted and thought like they were teenagers which made the story choppy and a little hard to believe.

Roberto De Leon or Loco as he is known to his team, has had a rough life, and so he pushes himself to the limit in everything he does. And this makes him a better operatiive.

Claudia De La Cruz is an FBI agent on a special mission to catch some drug cartel. She is kidnapped when the mission goes wrong and the Delta Force Team Razor 8 is sent to rescue her.

It was very hard to believe that such a disciplined soldier would let a beautiful woman get under his skin and jeopardize his mission to rescue her. I do believe there can be a strong attraction between two people and it can form very quickly.

I did like the surprise twist near the end of the book. It added some spice to the story.

I've reviewed a lot of books over the last seven years and I don't think I've read one this poorly written. I don't like to give a book an unfavorable review and I've done it one other time. I so wanted to get involved in this series, now I don't believe I can.
This is also the first book I've ever came close to not finishing. I kept thinking it has to get better.

I am trying to decide if the Razor 8 books are companion books to the De La Cruz series.

To be fair to the author, I would read another from a different series to see if there is a difference.