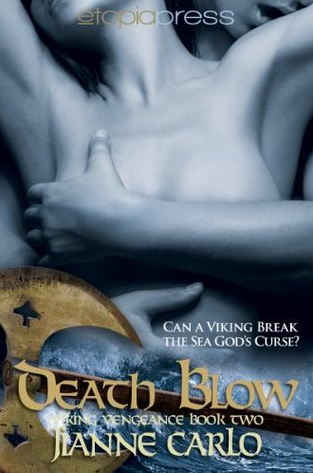 Can a mere Viking break the curse of a sea god?

Cursed by the sea-god Ægir to be burned at the stake, Lady Nyssa seeks the one man who can save her--the warrior who bears the mark of the Saracen. When she finds a Viking warrior wounded and senseless on a beach, she knows he is her savior. But Ægir’s wrath extends to others in her life as well. He’s killed her father and stepmother, turned her stepbrother into a mountain lion, and imprisoned her people. And worse, he’s cursed any man who lays with her to have his manparts wither and die.

Konáll has traded coin a-plenty to gain a wife with lands, the daughter of the King of Moray. He expects a refined, comely, trainable damsel, not a doomed warrior princess with the strength of a giantess who cannot bear the touch of a man. But once he learns more about this woman who speaks to talking mountain cats and hides as a peasant among the rabble, he cannot deny his feelings. There’s more than one way to breech a maidenhead, and if teaching her the ways of a woman’s pleasure with a carved ivory dildo is what it takes to make her his, then he’s more than happy to challenge the wrath of a god…


My Review:
Lady Nyssa has had a very hard life, she's been cursed by the sea god Aegir to be burned at the stake. But his curse doesn't stop there, she gets physically ill at the touch of man, and any man who would lay with her would have his manparts wither and die. The sea god has also done many other things to Lady Nyssa, turned her step brother into a mountain lion, imprisoned her people, and killed her father and stepmother. The only thing that can break the curse is a man with a Saracen ring.

Konall is betrothed to Lady Nyssa, daughter of King Moray, at the orders of the King of Scotland, King Kenneth. While on his way to the land of King Moray, Konall is knocked from his ship during a terrible storm.

Nyssa finds a viking warrior seriously wounded on the beach, she instantly knows this is the one who can break the curse.

When Konall awakes, he finds himself tied down and beside a huge mountain lion. A grungy boy attending a fire is also in the cave. There is more to the boy than meets they eye and Konall soon learns the 'boy' is Lady Nyssa and she is so not what he expected. He learns of her curse and must find a way to take her virginity without using his manhood. Will Konall be able to break the curse or will Lady Nyssa die at the stake?

Book 2 of Viking Vengeance Death Blow by Jianne Carlo is one page turner of a story. I had to keep reading to see what was going to happen next. This story is jam packed full of action, twists and turns, surprises, and lots of romance. The characters are larger than life, full of emotion, and are three-dimensional. Mus, the mountain lion is such a likable character, I had such compassion for him. The villains are gritty, determined and add flair to the story. Ms. Carlo does another fabulous job with creating a wonderful world for her characters to live. There is a lot of sexual tension between Konall and Nyssa and the reader can almost feel it. Konall is another strong viking that expects his orders to be obeyed, especially by his wife. Konall also has hidden scars on his heart, he's a great hero, very well liked. Nyssa is a headstrong lady, she's also tough and determined to take back what is hers. Ms. Carlo added just enough humor and mythology to make this storyline very interesting and compelling. I can't wait to read Vengeance Hammer, Draddor, about the youngest of the three brothers. Death Blow is such a fantastic read, everyone should read it.