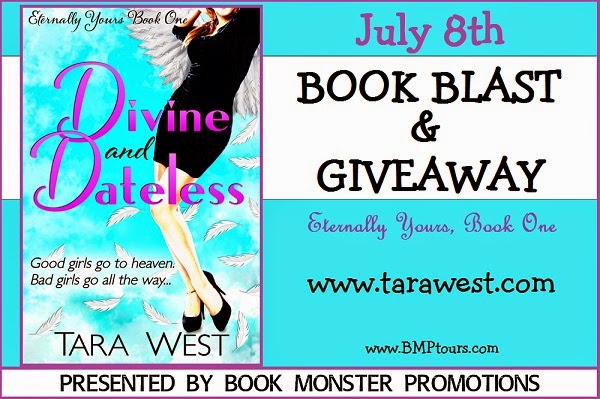 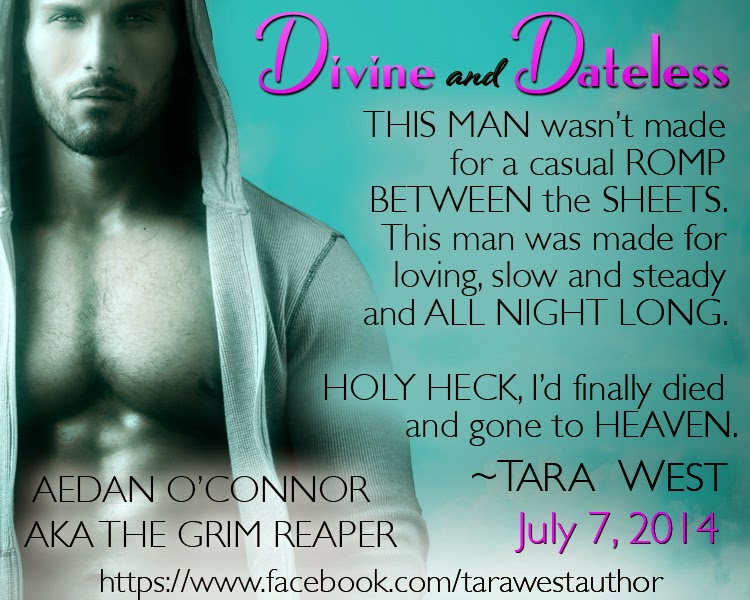 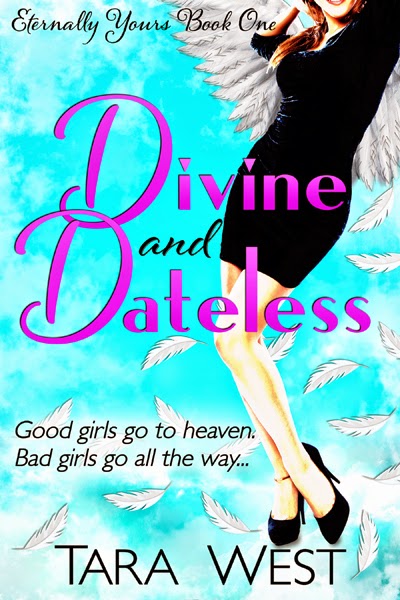 
Blurb:
Good girls go to heaven. Bad girls go all the way...
What can be worse than electrocuting yourself while getting ready for your internet date? Realizing the hot stud you’ve been fondling is the grim reaper? Being chased by a sex-crazed bloated, naked corpse?

How about an eternity of more bad hair days and horrific dates?  Or lusting after the one guy in all of the afterlife whose hydrophobia rivals his fear of commitment?
Yeah, that’s a whole lot worse. 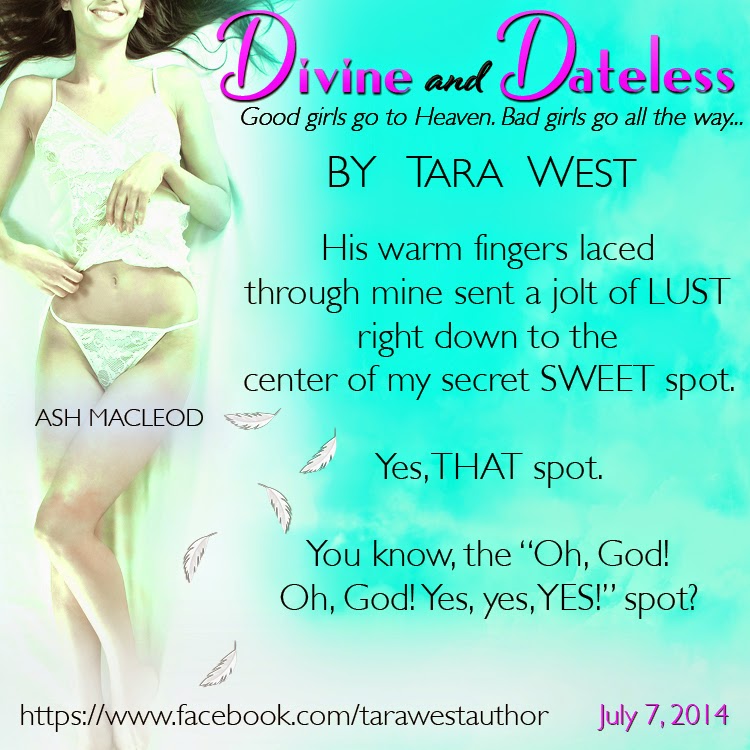 Excerpt:
I let out a huff of air, knocking a piece of wayward frizz out of my eye. “Okay, the Grim Reaper is flirting with me. Now I know this is a dream.”
He laughed, combing a hand through his thick, dark hair. “You want proof I’m real, don’t you?”
I wagged a finger in his face. “Flirting hardly counts as proof.”
“Sorry.” He shrugged. “That’s all I’ve got.”
Then a thought came to me, a really, really wicked thought. That devil sitting on my shoulder had to have been working overtime to come up with that one. I tilted my chin, looking deep into his eyes as I gave him a challenging glare. “What about kissing?”
Grim’s face paled, and, ironically, he looked like he’d been spooked by a ghost. He backed up, holding out his hands in a defensive gesture. “I’m not going to take advantage of you.” His words were at war with the molten look in his eyes.
Though I knew my hair was a frizzy mess, and my tight, black skirt might have exposed a bit too much pudge in the thigh area, I knew lust when I saw it, and this man was turned on.
Okay, since he was just a figment of my imagination, I figured I’d enjoy playing out this fantasy while it lasted. So I did what any woman in my situation would have done during an uncomfortably awkward moment of flirting gone wrong, I kept right on flirting. Ignoring the body lying between us on the floor, I stepped over my torn dress, which was definitely exposing too much pudgy thigh, and moved toward him until he was backed into a corner.
He stiffened until he was parallel to the wall. That would have been a definite sign he was not interested, except he licked his lower lip like he hadn’t eaten in a week, and I was a juicy cut of prime rib. I continued my advance until there was barely a breath between us and my heavy breasts were pressing against his chest. He stood there with this deer-in-the-headlights expression, and that’s when I started to lose confidence.
His knee went up, grazing the skin between my bare thighs, and a zing shot straight to my lady parts. Holy heck! I was horny for Grim! If this really was a dream, I hoped I didn’t wake up for at least another ten minutes. Scratch that. Make that twenty. Judging by the way this flirting was progressing, we’d both be at home base faster than I could devour a plate of triple-chocolate chunk brownies during PMS.
“Prove to me I’m dead,” I cooed, laying a hand on his chest. The top button on his long-sleeved cotton shirt was unfastened, revealing just the right amount of dark hair and a hint of hard muscles beneath. I moved my fingers to that small patch of curls, letting the heat from his bare skin on mine soak through. And then I did something naughty. I leaned up and pressed a feather-soft kiss on his tanned neck.
He groaned, cupping my shoulders in his strong grip. “What are you doing to me, woman?”
“Proving I’m not dead.” I giggled, nipping at his earlobe for good measure.
“Maybe you need some other kind of proof,” he growled, right before his lips came crashing down on mine in the most heat-searing, exquisite kiss imaginable.
I moaned into his mouth as I welcomed his tongue’s invasion. I tasted the sweet scent of fruit, maybe apples? I wasn’t quite sure, but I knew I needed to investigate further, so I fisted his shirt collar in my hands, clutching it like a lifeline as I deepened the kiss. He pulled me against the length of his hard body until I straddled one hard thigh. Our tongues sparred and our lips melded together perfectly.
At that moment, when my brain had been robbed of all coherent thought, one word popped into my brain: heaven. His kiss was pure heaven.
I released his collar, roaming the length of his body, which surely had to have been carved from granite. I didn’t care if I was pushing boundaries. This was a dream after all. Then I settled on that exquisitely large and stiff protrusion between his thighs, and I froze.
Holy shit, he was harder than a rod of steel, and as his leg ground out a torturous rhythm between my thighs, I realized I was wetter than spring in Seattle.
This was not a dream. This was real, and I had just fondled the boner of the freaking Grim Reaper. 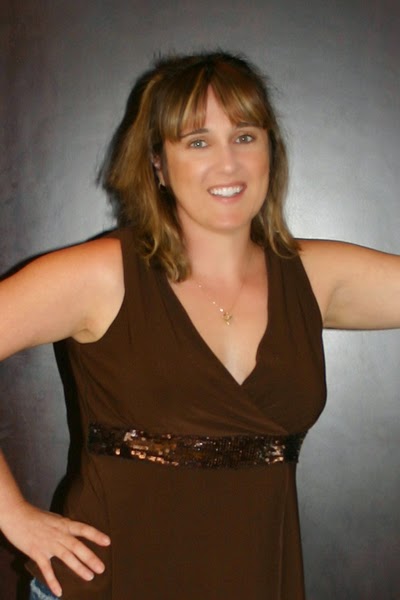 Tara West's young adult and new adult romances have been Kindle bestsellers. A former high school English teacher, Tara is now a full-time writer and graphic artist. She enjoys spending time with her family, interacting with her fans, and fishing the Texas coast.

TOUR GIVEAWAY DETAILS:
GRAND PRIZE:  One $25 Amazon gift card
RUNNERS UP:  Three winners will each receive a signed paperback of Divine and Dateless