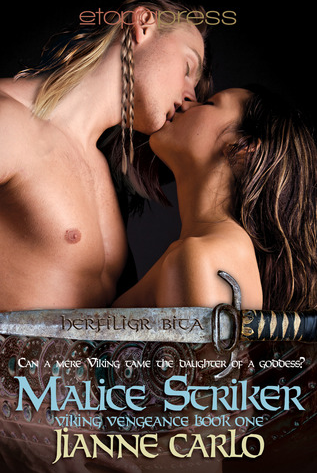 Can a mere mortal Viking tame the daughter of a goddess?

When Scotland’s King Kenneth orders his death and kidnaps his sister, the Viking Brökk—the Malice Striker—plans his vengeance: he’ll steal the king’s bastard daughter from Sumbarten Abbey and use her to buy his sister freedom. But his schemes go awry when his liege lord commands him to wed Skatha—and when he finds five women instead of one at the Abbey, none will claim the King as father.

When the Viking abducts Skatha and her women, she’s bewildered. Why did Brökk seize her? Why does he want her for his wife? She weds him willingly enough when he threatens to kill her companions, but she vows to control her own destiny and escape. For if the Viking discovers her secrets, the laws of his people will force him to cast her aside…or kill her. And even Skatha, daughter of a goddess, might not escape the Viking’s wrath…

My Review:
I loved, loved, loved this book. Jianne Carlo has such a creative way for coming up with the titles of Viking Vengeance series. This book is rich in history and it shows that Ms. Carlo has done extensive research in the writing of this book and she was able to create a fantastic romantic story that has passion, lots of emotions, twists and turns, murder plots and surprises galore.

The characters seem to leap off the pages and make the readers fall in love with them. This story is enhanced with it's secondary characters and a great setting for them to live in. Plus it's full of secrets that get revealed when the appropriate time comes. There is just enough wit and humor infused into the characters and story that is just plain genius.

One of my favorite lines is when Brokk would say "Loki's Toes", it would just crack me up, I laughed so hard. Brokk makes a great hero, he is a big strong, handsome viking who is strict in his rule but also fair and has many scars, inside and outside. As the story progressed you can see his character's growth.

Skatha's character was almost as strong as Brokk's. She is strong willed, confident, trusting and humble. I really liked her a lot. I can't imagine being able to do some of the things Skatha could accomplish. She was also very determined.

Brokk and Skatha's marriage starts out a little rough, well a lot rough but they are able to move forward and grow their relationship.

Oh and villains abound in this story and they make the plot so delicious. So if you're into handsome vikings with a little bit of mythology thrown into the mix, this is a must read for you!