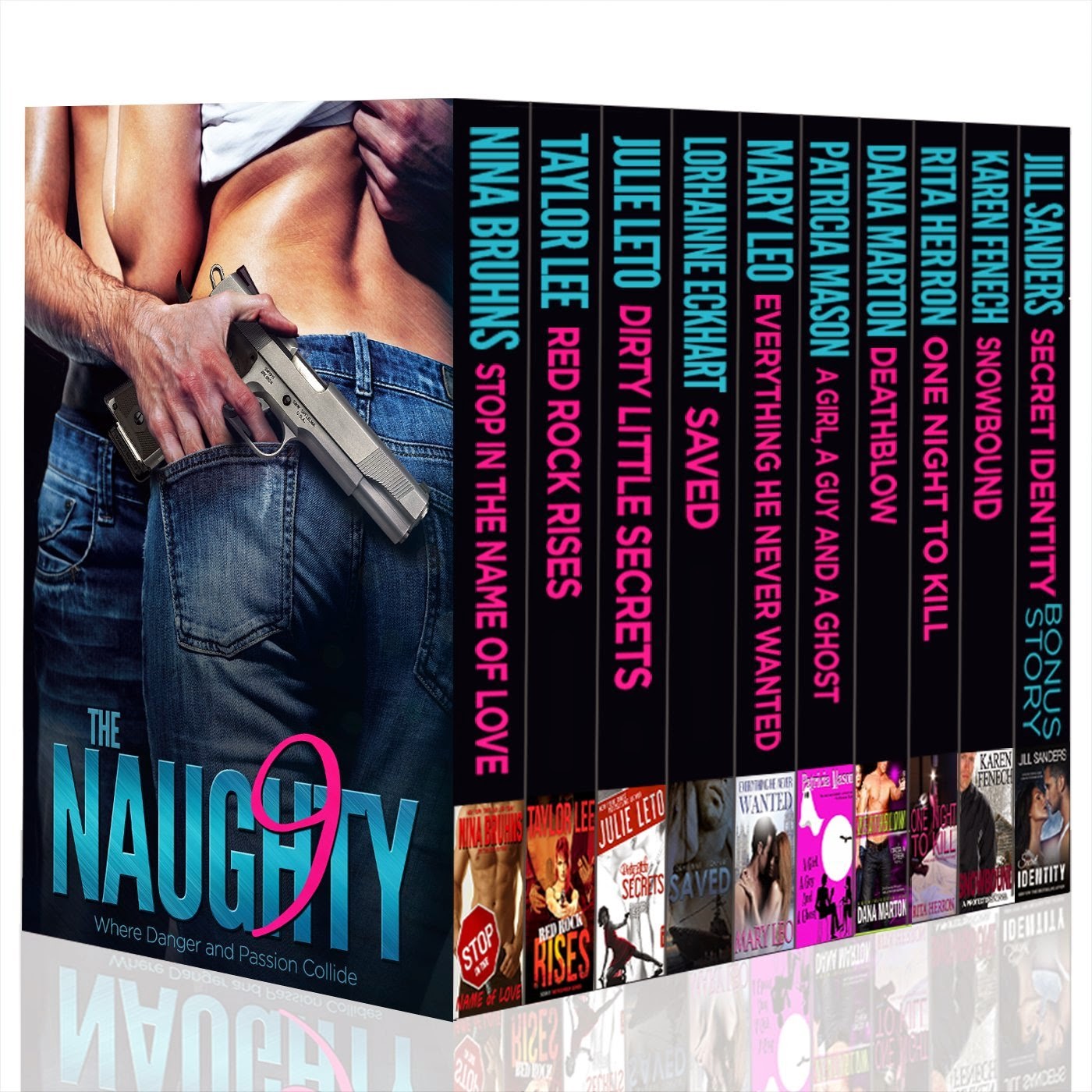 
The Naughty Nine — Where Danger and Passion Collides

Included in this box set collection:
* Stop in the Name of Love by New York Times Best Selling author Nina Bruhns
When an undercover cop must cozy up to a suspect’s pretty neighbor, things don’t go as smoothly—or seductively—as he’d hoped when she tells him she hates cops and wants nothing to do with him or his damn assignment.


* Deathblow by New York Times Best Selling author Dana Marton
Former small-town football hero turned cop, Joe Kessler never met a linebacker, perp, or a woman he couldn't handle. Then a troubled single mom walks into his life, & the only place this hot jock will ever see 'easy' again is in the dictionary.


* A Girl, A Guy And A Ghost by Patricia Mason
A sexy psychic private eye could help her find a ghost... or turn her into one.


* Everything He Never Wanted by Mary Leo
Billionaire, Antonio Milani, came to London to recover what is his: a rare, signed copy of Oliver Twist. Instead, finds himself falling for the woman he suspects is involved in an international ring of book thieves.

Excerpt:
Despite his distaste for what she’d done, he immediately went hard gazing at the long line of her magnificent back, all her luscious curves and her naked butt. She seemed much rounder and with more delicious curves in the soft glow of moonlight peeking in through the sheer curtains on the window. Her legs were longer and more muscular than he remembered, but then he didn’t remember much about that night. Plus there was something on the small of her back, right above her sweet butt, but he couldn’t make it out. Even her hair had a much deeper tone to it, although there were dark shadows over the upper part of her body and he couldn’t really see much above her shoulders.

He closed the door behind him and stripped naked figuring he’d get the sex out of the way, then in the morning she’d return his book and he’d be out of there before breakfast.

An easy, sensuous exchange, one they would both thoroughly enjoy.

Within moments he slipped onto the bed and wrapped his arms around the woman who liked to play with fire.

As soon as he nuzzled her sweet neck, taking in her musky perfume, she said, “I sleep with a gun under my pillow, and my hand is on the trigger. I’m an excellent marksman, and if you don’t leave right now I’ll put a bullet in your head.”

Antonio jumped out of bed and was out of the bedroom faster than his thoughts could catch up to his mouth. “Wait! What? Holy crap, woman! It’s me.”

“Me who?” a voice shouted from the bedroom as Antonio stood in the middle of the living room, shaking from fear, his heart beating faster than a humming bird’s, adrenalin gushing through his veins. He felt as though he was going to pass out, but then he took a couple deep breaths and regained clarity.

“The house guest you invited.” He dashed behind the sofa, as if it could serve as some sort of protection from a screaming bullet.

An unfamiliar face peeked out from the doorway, the rest of her body hiding behind the wall, then she disappeared back inside the bedroom.

“Okay. Okay. I’m confused. I don’t know who you are, or what you’ve done with Jackie, but please just throw me my clothes and I’ll get out of here.”

His clothes flew out of the bedroom, along with his shoes, one at a time, without the girl showing her face. Antonio ran up the short hallway and quickly scooped up everything, but couldn’t seem to manage getting anything on. He was shaking too much. Instead he ran back down the hallway holding his things in a tight ball in front of him.  “Look, I don’t know who you are, but I’m a . . . friend of Jackie’s. She invited me.”

“How do I know you’re telling me the truth? You just broke in.”

He couldn’t believe he was having a conversation with someone who had just threatened to kill him.

After a long silence, the girl said, “What’s your name and how do you know Jackie?”

“Shit,” he heard the girl say.

“Everything okay in there?”

“Is there another one?”

“Good, because I thought I was special.”

“Wouldn’t dream of it.” He tried to placate the gun toting lunatic in the bedroom, but he really needed to know who she was. “Who are you?”

Antonio’s potential shooter slowly came into view at the end of the hallway. She flipped on a light switch and he could see that she was wearing stretchy tights that showcased bunnies in various colors hopping down her legs, and a white tee with a huge bunny with floppy ears that seemed to outline her full round breasts. Her thick auburn hair was pulled up in a messy ponytail on the top of her head. Her empty hands were at her sides.

He let out the breath he’d been holding. His shooter wore bunnies?


* Red Rock Rises by Taylor Lee
A fiery former undercover agent, as tough as she is beautiful , fiercely independent, she is the Rock. Few see the vulnerable woman beneath. No one messes with Red Rock until she meets the handsome Police Chief.


* One Night To Kill by Rita Heron
A military man must use his leave to play bodyguard to the General’s sexy daughter!


* Saved by Lorhainne Eckhart
Growing up I had dreams that one day I'd fall in love, marry & start a family. Then one night I was taken. I survived, escaped, I was saved. Eric didn't see me as damaged. He didn't see my baby as a monster. He protected me, kept me safe ... he saved me.


* Snowbound by USA Today Best Selling author Karen Fenech
FBI Agent Mallory Burke, injured and on the run for her life, is stranded in a snowstorm with a reclusive and secretive cop she's not sure she can trust but is falling in love with.


* Bonus Novella-Secret Identity by New York Times Best Selling author Jill Sanders
Carter always had a thing for his best friend Eve. He hired her to boost his business & it’s never run more smoothly. When an opening presents itself, he takes a chance at happiness that could end up destroying their friendship